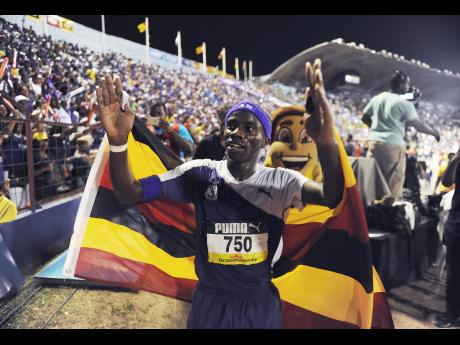 Gladstone Taylor
Aryamanya Rodgers of Kingston College celebrates a 1-2 victory with teammate Shane Buchanan (out of picture) in the 5,000 metres open at Champs.

Yes, it is a big deal that he was celebrating with his national flag. After all, this young man was many miles from home and had only a small number of family members with him here. Moreover, he was a middle-distance runner competing for a school better known for its sprinting.
Alas, it was nothing more than a small victory, because for all his effort, his school fell short and saw the Mortimer Geddes Trophy elude it for another year. Of course, there was the heartbreak, hysteria and finally the sheer hypocrisy. Nonetheless, there must be something fundamentally wrong with someone wrapping himself in the colours of something that gives him identity, when throngs of adults make him the focus of their game of ascendancy and denigrate him, without recognising that he is simply a little boy who has gone through a whole lot.
The ISSA Boys and Girls’ Championships ended last weekend, and it is not only Kingston College (KC) that lost. Indeed, good sense, sportsmanship, respect for others and oneself were also flushed down the tubes.
Call it ‘pointless’ in as many ways as you wish, but I flashed my light blue and St George’s College emblem on the Champs days and declared my loyalty. Of course, given that football, cricket and other sports that required balls were not any of the 46 events, my boys did absolutely nothing to touch the scoreboard. Yet, loyalty to my school was unflinching, although arguably, since I spent more years on North Street than all KC men, with the exception of those former athletes who repeated multiple forms in the 1970s; I would, of course, want to be able to cross the road and look at the trophy.
You see, my ‘Jawjiz’ helped to form me, so I cheered for my school during the drought years when we sucked at football. And for good measure, I used to go to Girls’ Champs between the 1970s and early 1990s and can remember, first hand, when the eloquent and lanky Grace Jackson and her schoolmate Olive McNaughton won in 1978 as the leaders of The Queen’s School track team. I was divided between cheering for Alpha, because it was my ‘sister school’. However, since my sister’s school was Merl Grove, and she, in fact, had competed for her school, it was natural for me to wear the same light blue and support the Labor Omnia Vincit, a motto thrice recycled from Rusea’s and St Jago High schools.


Yet, the double standard of Boys and Girls Champs is disgusting. On the one hand, we have scores of Jamaicans, who dressed their cars in the colours of Germany, Argentina (although admittedly, it looks like STGC), Spain, Italy and France.  Worse, in the last World Cup, as we televised the games here, hundreds of my countrymen and women wore their Brazilian T-shirts to work and some even were so stupid that they referred to their chosen team as ‘we’.
I mean, it is bad enough when one is a Liverpool, Barcelona or Chelsea fan, because those are simply clubs. However, what kind of blindness does it take to dress oneself in the colours and flag of a foreign country, especially one that might not even let you in despite your having a visa? How can one’s national pride allow him or her to show allegiance to a country where people like him or her are called monkeys?
So then, if young Aryamanya Rogers can’t run with his national flag while competing in a local track meet and while not competing against Jamaica, no Jamaican should wear any foreign colours or fly foreign flags. But that is only part of the story. Understandably, mothers with their sons or surrogate children competing for Rabalac or Fortis must be mothers first and do what is necessary to boost their children. Similarly, I know that Calabar’s vice-principal would not dare wear his Jamaica College colours.
However, explain to me why a grown woman, whose alma mater has children in a fledgling track and field programme, and who would love to see their ‘elders’ backing them, would feel the need to jump on some bandwagon for a school of boys that she has no connection to? True, some of them do look as if they are men in drag as they force their frames, which time was unkind to, into T-shirts designed for women 50 pounds lighter. However, I am sure none of them is a transsexual old KC or Calabar boy who I knew in the 1970s and 1980s.
More ironic is that many of these very same women are those who, whenever they get a mic, spew their faux feminist banter and baulk over the fact that the Sunshine Girls get very little support from the public, despite ranking higher than the Reggae Boyz, or that our female ballers are under-recognised.
Staphanie Taylor is our most reliable cricketer and Shelly Ann Fraser-Pryce is close to being a legend herself. Still, their incomes are significantly lower. But if women do not rate women enough to show up for them, what right do they have to complain when men dominate in recognition and incomes?
And as for the seasonal Champs worms who only come out of the woodwork annually to relive past glory or hold on the only good thing they have achieved in their lives, show your continued support for your Rabalac, Fortis or Fervet by turning up at school, mentoring a youth, paying some school fees, or simply making a small donation to the welfare of these boys. And go and watch them when they run at other ‘bush’ meets, too.
And please, dissenters; reserve the disrespectful comments and instructions. Real men respect all mothers.
- Dr Orville Taylor is senior lecturer in sociology at the UWI, a radio talk-show host, and author of 'Broken Promises, Hearts and Pockets'. Email feedback to columns@gleanerjm.com and tayloronblackline@hotmail.com.