Answord Hewitt | OUR watchdog has teeth 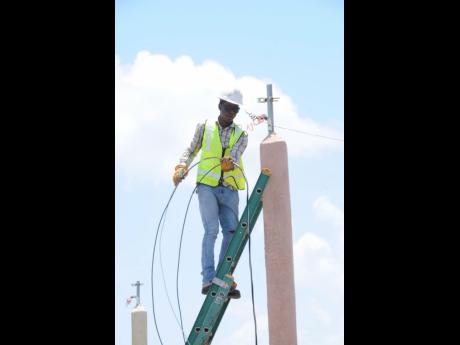 Jermaine Barnaby
A JPS workman installs power lines in the Springfield housing development in Clarendon on August 17, 2016. Breaches of specified service-level standards led to JPS and the NWC paying out about $128 million in compensation to customers in 2016.

We are grateful for your publication of the following complete text of the response sent to Professor Carolyn Cooper, by the Office of Utilities Regulation (OUR), on Friday, April 7, 2017. We feel that sharing the information with your readers will provide a fuller context to the column supplied by Professor Cooper, who admitted in her column to not being able to quote our response in full.

The OUR is not in a position to answer that question definitively, although we are reluctant to offer specific legal advice on what recourse is available through the courts as much depends on the nature of the claim and the remedy sought. That said, however, we are not aware that a class-action suit is a recourse that is available in this jurisdiction.

2. Are there any laws that protect consumers against utility companies that fail to deliver the services for which they are paid?

Although it appears that your particular concern is with respect to FLOW, you have posed the question with respect to utilities in general, so we have attempted to provide our response in both general and specific terms:

a) Generally, the contract for service between the utility and the individual consumers provides some definition of rights and obligations that can be enforced by private suit in the event of a breach. We are also aware that in some instances, resort may also be had to the Consumer Affairs Commission.

b) As it relates to the OUR, the Office of Utilities Regulation Act, the Telecommunications Act (the Act), and the Electricity Act, 2015 prescribe some of the obligations of service providers to customers and the wider public in the provision of regulated services. In particular, these statutes provide the OUR with powers to examine the operations of utility companies and other organisations that provide these services and to take various actions where the provision of these services do not accord with the requirements of the relevant law or the related licences.

Depending on the provisions of the sector-specific legislation and the nature of the infraction, these powers include the issue of orders or directions to the utility provider to cease an action, remedy a breach, or compensate affected persons; also to seek an injunction, recommend suspension or termination of licence, administer administrative penalties, or take steps to have criminal prosecution initiated.

The OUR's powers also include the resolution of complaints against utility companies where consumers appeal against the final decisions of the utility provider. Note, however, that in the exercise of its powers, the OUR has to strictly adhere to specific and involved processes as set out in the various pieces of legislation. Some of these remedies do not provide immediate relief.

c) In the case of the electricity and water sectors, the OUR has used the tariff-review processes to establish Guaranteed Standards, which result in payments to utility customers (automatic in some instances and by claim in others) where there is a breach by the utility provider of specified service-level standards. In fact, the Jamaica Public Service Company Limited (JPS) and the National Water Commission (NWC) together paid out about $128 million to utility customers in 2016. About $121.7 million was paid out for breaches of the Guaranteed Standards, while the balance of $6.59 million was secured for utility customers through the OUR's investigation into their appeals.

d) As regards the ICT sector for which the OUR's remit is limited to voice telephony and data services, there are no existing Guaranteed Standards. The assumption after liberalisation was that given the robust competition that existed within the sector, most consumers' issues would have been addressed via the competitive response. The indication, however, is that this has not been the experience of most customers, and so there is need for further measures. Consequently, the OUR even while intervening on a case-by-case or situation-by-situation basis to address ICT customer concerns, is pursuing a number of initiatives to provide consumers with better options for redress. These are detailed as part of the response to Question 4 below.

e) The Consumer Protection Act also makes specific provisions regarding some of the rights and obligations arising from the relationship of consumer and service provider and the remedies available to the consumer in this regard. It establishes the Consumer Affairs Commission, which has functions with regard to investigation of consumer complaints, and which, in certain instances, may mediate the dispute between consumer and service provider and/or participate in litigation processes where appropriate.

3. If not, what is being done to put such laws in place?

a) The Telecommunications Act allows the OUR to set rules, establishing quality-of-service standards and governing the administration and resolution of customer complaints. Cognisant of the ongoing expressions of concerns from telecommunications customers, the OUR has developed and consulted on a set of such rules, which will dictate certain minimum quality-of-service standards expected from these companies.

Some of the minimum standards included are: that a minimum of 95 per cent of calls to call centres should be answered within five rings; that there should be, at most, five customer complaints in total per 100 active subscribers for the service in a reporting period of three months; and, data service should be available to customers 99.95 per cent of the time during the reporting period. Telecoms companies will be required to provide quarterly reports against these standards, which will be made public.

b) Provisions setting out minimum requirements to be included in telecommunication service providers' complaints handling procedures are also included. Drafting instructions for these rules have been passed to the Ministry of Science, Energy and Technology (MSET) for submission to the Office of the Chief Parliamentary Counsel which will convert them to regulations. Once these are promulgated, they will have the force of law and can be enforced by the OUR.

c) The act also empowers the OUR to (a) protect telecommunications customers from contracts for service that contain clauses that are unreasonable and/or unfair; and to (b) implement fixed penalties for breaches of the act and the related regulations. Again, however, these have to be done by prescribed processes.

We have recently engaged expertise to assist in the consultation on and development of guidelines to govern these matters and expect to complete the OUR's part of the process before the end of this calendar year. A point worth underscoring with respect to the fixed-penalty regime is that it will allow providers that the OUR deems to be in breach to discharge their liability to conviction by making a payment. This holds out the prospect of quicker resolutions and less resort to lengthy court actions.

d) There is also a provision within the Electricity Act, 2015 for a fixed-penalty regime, but this has to be done in accordance with the administrative framework prescribed by MSET. The OUR is, therefore, engaging MSET to get this done expeditiously.

e) As regards the water sector, since there is, to date, no specific sector legislation, the OUR continues to rely on the provisions of the NWC Guaranteed Standards, the terms of the contract with customers, and the general provisions of the Office of Utilities Regulation Act for consumer protection.

- Answord Hewitt is the director general of the OUR. Email feedback to columns@gleanerjm.com.