Ian Boyne | The culture of corruption 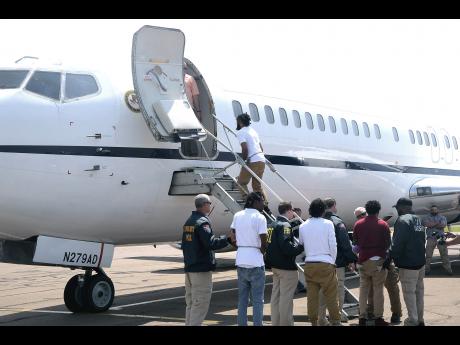 Norman Grindley
One of eight alleged Jamaican lottery scammers being extradited embarks a plane to the United States at the Norman Manley International Airport on Thursday. The lottery scam is part of a culture of corruption in Jamaica. 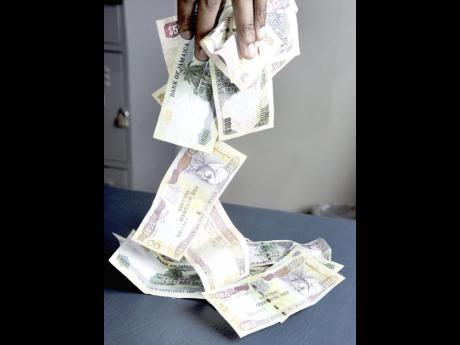 It will take more than legislation, enforcement, changing processes, and institutional change to stamp out corruption in Jamaica. We have a culture of corruption. We have to tackle it at its root.

And there is an intimate connection between corruption and every major problem that we face in Jamaica. Professor Trevor Munroe, a master at making the connection between ideals and everyday reality, used the occasion of the heavy rains and its effects last weekend to drive home the point that "our citizens need to understand more fully that while heavy rains come from the vagaries of nature, aggravated by climate change, exceptionally heavy damage to roads and infrastructure largely reflects the impact of corruption; not the will of God, but the hand of man - of corrupt contractors and public officials".

The National Security Policy for Jamaica 2013 says: "The direction of public works contracts into the hands of political affiliates has also been particularly damaging as this has often resulted in unnecessary, expensive, or poor-quality infrastructure. For example, a contract to build a road might provide an opportunity to reward political affiliates, and shoddy construction would ensure that the road surface would crumble, which would then allow the issuing of another contract to resurface the road. This is one of the reasons why Jamaica has, simultaneously, one of the most dense road networks in the world and one of the worst road networks in the world in terms of the percentage of roads in good condition ... in part due to the practice of preferentially assigning contracts to favoured contractors, with inadequate oversight."

All of us have our routine experience with how corruption holds us back as a country and affects us personally. Our high crime rate is directly related to corruption as some members of the police force who are sworn to protect are protecting their own corrupt interests and are in the pockets of criminals and dons. Police personnel tip off criminals who would otherwise have been caught and punished. Police leak information to criminals given by citizens, causing some to be killed and putting the lives of others in danger. Not to mention the deep distrust that these corrupt cops engender, preventing the police from gathering critical intelligence.

A huge part of the reasons many people don't cooperate with the police, but, in fact, resent them, is that a number of them are corrupt and can't be trusted. Decent citizens fear when the police are to get increased powers - even when those powers are designed to promote citizen security. Corruption in the police force creates incalculable harm.

Not only have the police aided in the illegal export of ganja, but they have facilitated the illegal gun-import trade. As the prime minister said in his recent Budget speech, "Sometimes we miss the link between corruption and crime. The corruption that allows illegal guns and ammunition to come through our ports must be stopped. The corruption that allows stolen vehicles to be registered and resold must be stopped."

Corruption is endemic in Jamaica. And while most people decry corruption, almost everyone engages in it in some way. There are Christian brothers and sisters who have no conscience pangs over buying their motor vehicle licences. These same good, decent, upstanding Jamaicans have no problem sleeping at night after paying bribes to policemen who stop them for traffic violations or for not having the right papers. Stealing electricity and water is not seen as stealing in the real sense.

Paying off people at Customs is seen as no big thing. It's 'how the thing set'. In fact, in our culture, you are a fool if you try to play by the rules - you are sure to get shafted. It is those who don't engage in corruption who are seen as outliers, weird, and self-righteous fools. Laws and increased efficiencies in the public sector alone won't change that culture.

Yes, public-sector transformation will help to reduce corruption. If our processes, procedures, and systems are simpler and more efficient, fewer people will be tempted to pay bribes. If you have to wait for weeks to get your papers from the Registrar General's Department, you will be tempted to pay a bribe.

But we too easily succumb to corruption rather than putting up resistance. If more of us were willing to suffer some inconvenience and send those corrupt bastards a stern message, more would change their tune.

But politics is a major contributor and facilitator to corruption in Jamaica. Politicians created garrisons that proved to be efficient incubators of corruption. When criminals aligned to political parties control communities, corruption is the order of the day. Protection money has to be paid. Meritocracy goes through the window . Entrepreneurship is stifled. Quality service does not have to be rendered, and market rules don't apply.

What is the incentive to produce excellence if the results are determined by political allegiance? Our politicians have deformed us in ways in unforgivable ways. They have fostered a culture of clientelism and dependency, which are taproots of corruption. They have corrupted consciences, soiled souls, and blighted hearts. Our political class has buried us deep in the soil of corruption.

There have been notorious criminals caught by hard-working police who were released on instructions from politicians. Our politicians have a lot to account for.

The fact that the wealthy and the well-connected get away with acts of corruption deepens the cynicism in the society. It breeds political alienation and disaffection and weighs down the democratic spirit. Jamaicans feel there is one law for downtown and another for uptown. We need to see more powerful, uptown people dragged off to jail and disgraced like those scammers who were paraded at the airport last week. Friends of politicians and the rich must pay for their corrupt deeds.

As Professor Munroe pointed out in his address last week, "The contractor general's annual report of 2013 found that 137 unregistered contractors were engaged by public bodies and received sums amounting to over quarter-billion Jamaican dollars - no prosecution, no conviction, no penalty. Between 2009 and 2012, the contractor general recommended 40 prosecutions of public officials, some of them highly placed. Result? No prosecutions.

"In 2012, the Private Sector Working Group on tax reform ... submitted to the Taxation Committee of Parliament that there should be 'visible imposition of criminal sanction (including jail term) against large tax evaders (i.e., making an example". That has not been done. Munroe notes that the US State Department's International Narcotics Control Strategy Report says of Jamaica, "Corruption remains entrenched, widespread, and compounded by a judicial system that has a poor record of successfully prosecuting corruption cases against high-level law enforcement and Government officials".

One thing I am deliriously happy about is that the International Monetary Fund (IMF) has forced the Jamaican state to stop handing out deals to vested interests that might have made large political donations. Certain special incentives that were open to political abuse have been taken away by the IMF, thankfully. Happily, too, the IMF has made the creation of a single anti-corruption agency with teeth a benchmark, which must be met by October.

If the Jamaican State cannot protect our interests, let the international community assist.

So legislation, enforcement, and systemic change, yes, but I remind you of Professor Carl Stone's salutary statement in 1992: "The dominance of money as the single most important currency of influence, power, and status ... [has] promoted increased and rampant corruption both in Government and in the private sector." That culture has to change.