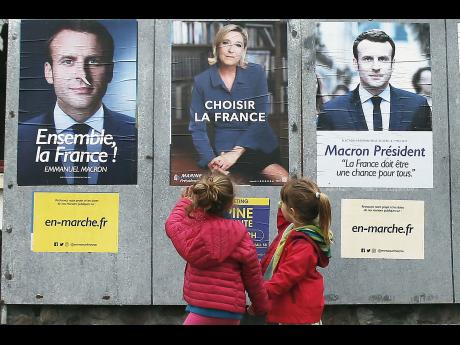 We should be going to bed tonight with Emmanuel Macron elected as the next president of the Fifth French Republic. If the pollsters and pundits turn out to be right. But then there was the Trump election in the United States and Brexit in the United Kingdom.

The second-round run-off in the French presidential election today has gripped the world's attention, not because the youthful 39 year-old Macron who, like Donald Trump, had never run for any public office before has in a mere 12 months politically risen to become one of the two contenders without being attached to any of the country's major political parties. Or that he is married to one of his former teachers who is 25 years older than him.

The real focus of interest is the other contender, Marine Le Pen of the Front National, and her determination to pull France, a founding member, out of the European Union. The election, The Associated Press posts, "will have undertones of a referendum on France's EU membership". Le Pen has pledged to call a real referendum within six months of becoming President.

"We are ... turning a page in French political history," declares the pro-EU, pro-globalisation, Emmanuel Macron. It's more like rewriting the entire book of post-World War II French politics!

In the heart of that politics, for most of the period, has been the French commitment to the European Union as a founder. A commitment based on avoiding any future European conflict on the scale of WWII and generating economic prosperity through transnational cooperation.

For Marine Le Pen and the Front National, "the major issue of this election is runaway globalization, which is putting our [French] civilisation in danger. The French have a very simple choice. Either we continue on the path of total deregulation, offshoring, mass immigration, free movement of terrorists, the reign of big money. Or you choose the France of borders that protects your identity," The run-off vote today, she says, is about France's future. "It is time to liberate the French people."

The first round had a crowded field of 11 candidates. Macron, who was economy minister in the current socialist government of Francois Hollande but left to form En Marche! [English: Forward! Or On the Move!] just a year ago, garnered 24.01 per cent of the first-round votes. Marine Le Pen was just under three percentage points behind. The combined vote of the Republicans and the Socialists at just over 26 per cent is a historic low. The old guard is out.

Macron describes himself as "neither of the Right, nor the Left". As economy minister, he formulated the Macron Law to promote economic growth and opportunities. He founded the En Marche! Movement in April 2016 before resigning from the Cabinet on August 30. A pro-business investment banker, he was also the most explicit pro-EU candidate.

Marine Le Pen rose to the leadership of the Front National, her father's party, in 2011. She has recently stepped down as party leader in the face of judicial enquiries. Her campaign programme and the longstanding position of the Party is 'France first', the sovereignty of the French state, pushing for exit from the Eurozone and the EU itself, a return to the French franc and concerns about strengthening national security and reducing immigration.

The two rounds of the election are being held under a state of emergency that was declared following the November 2015 Paris terrorist attacks. Some 230 French people have died in terror attacks since 2015.

The second round could have been a real nail-biting contest between Emmanuel Macron and Marine Le Pen and their polar opposite political platforms. Just days before the first-round vote, the polls were showing that one in three of the 47 million eligible French voters was still undecided!

Le Pen, monotonously and opaquely described as 'Far Right' by a media with its own Weltanschauung (aptly German for world view), is far from being a fringe candidate from a fringe party. She placed third in the 2012 presidential election with 17.90 per cent of the vote. And her father, founder of the NF, was one of the two contenders in the second round in 2002, with 16.86 per cent of the first-round votes in an even larger field of 16 candidates.

What happened next in 2002 is set to repeat in 2017, but on a smaller scale. The losing parties and their candidates locked arms to lock out the FN and its candidate. Jacques Chirac took the presidency with 82.21 per cent of the second-round vote. But Jean-Marie Le Pen was still able to up his score by a percentage point to 17.79% of the votes.

His daughter Marine is predicted to seriously exceed that score. The French polls are predicting no better than at best a 64 per cent margin of victory for Macron. The Big Two parties immediately threw their weight behind Macron after their own failure to get into the second round. Or more correctly, they threw their weight against Le Pen. The Socialist candidate Benoit Hamon urged voters to keep out Le Pen who he described as "an enemy of the Republic." Francois Fillon, the Republican candidate declared, "There is no other choice than voting against the extreme Right."

What the Front National and its presidential candidate stand for, including Frexit, France's exit from the EU, is obviously gaining traction. Nationalism is resurging against globalism around the world and has delivered major victories in the Trump election in the US and Brexit in the UK. And the multilateralist global elites are screaming disaster and the end of the world.

Out of ashes of the Second World War, France was a founding member of the European Union as one of the 'Inner Six' countries, the others being Belgium, West Germany, Italy, Luxembourg and the Netherlands. The rising trend for exit in this previously rock solid member does not bode well for the future of the Union. It really is only a matter of time before rising anti-EU sentiments force a French referendum. The British referendum was long in coming but it did finally arrive. Le Pen says "an important part of my project is to regain our sovereignty and thus free ourselves from the anti-democratic rules of the European Union."

It was Robert Schuman, then the French foreign minister, who led the formation of the ECSC with the famous Schuman Declaration of May 1950. Determined to prevent another such terrible war, these countries concluded that pooling coal and steel production would, in the words of the declaration, make war between historic rivals France and Germany "not merely unthinkable, but materially impossible". The declaration called for the establishment of a common High Authority. The EU was established under its current name in 1993 by the Maastricht Treaty.

There is rising rebellion in the Community. Not least in founding France. The Macron presidency will be a postponement, not a cancellation, of the necessity of putting the matter of EU membership to the people. The result then could be as surprising as Brexit. Britain has always been something of a fringe member, and a cantankerous one. Late in, not joining the Eurozone nor using the euro as currency - and constantly quarrelling with the Union. A European Union without France is unthinkable.