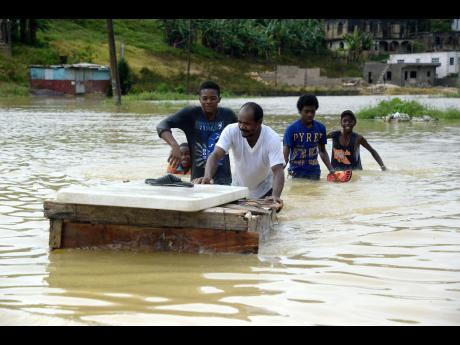 It was no hurricane or tropical storm, but the damage done by the recent rains has already been estimated at nearly $1 billion. This in a country that has large social deficits and a burning need for an economic stimulus.

Our attention has justifiably been focused on our appalling drainage systems, poor and corrupt road construction, inadequate infrastructural planning and development, and mismanagement of informal settlements. Our problem is not just our vulnerability to natural hazards and extreme weather. It is our human-induced problems that exacerbate our climate-change challenges.

Our Ministry of Foreign Affairs has a critical role to play, and our political leaders need to understand that it is not just a matter of setting our economic house in order and getting the macroeconomic fundamentals right, while leaving everything else to the 'magic of the market'. There is a naive view by some that all we need to do is the macroeconomic heavy lifting, providing the right tax incentives, ease-of-doing-business environment, and industrialisation-by-invitation strategies, and we will have economic growth. It is felt by these persons that any talk about pursuing international economic reforms or pushing for changes in multilateral lending policies is chasing windmills.

Happily, and without much help from those of us drunk on neo-liberal theology, multilateral institutions like the IMF have already been doing some fresh thinking on this matter of meeting the developmental needs of small states like us in the Caribbean. In November last year, the IMF published a very important paper titled Small States Resilience to Natural Disasters and Climate Change Role of the IMF. In that paper, it acknowledges that "small developing states are disproportionately vulnerable to natural disasters. On average, the annual cost for disasters in small states is two per cent of GDP - more than four times that for larger countries. This reflects a higher frequency of disasters, adjusted for land area, as well as greater vulnerability to severe disasters."

The IMF notes that "greater exposure to disasters has important macroeconomic effects on small states, resulting in lower investment, lower GDP per capita, higher poverty and a more volatile revenue base". The prime minister, in touring flood-ravaged areas on Wednesday, was asked whether there was any budgetary provision for the kind of damage we have experienced. He said that while there was some provision for contingencies, there was no provision for this level of impact.

The IMF would not have been surprised by the PM's comments. Says the paper: "Too often, disaster financing is largely identified 'after the event'. Partly as a result, larger disasters appear to be underfinanced for small states ... . Advance planning should provide for a combination of fiscal buffers, contingent financing plans and risk-transfer arrangements."

It is important that the IMF is speaking like this, and we need to be aware of this recognition on the part of the Fund so that we are emboldened in making our case to them. Policymakers can't be so consumed by the day-to-day financial management issues that they are not keeping abreast of the IMF papers being produced and the policy thinking taking place there. It's not the same old IMF, as I have been saying for a few years now. They have been considerably chastened by both the Asian financial crisis of the 1990s and the global economic crisis of 2008.

But we in Jamaica have become more Washington Consensus than John Williamson and so scornful of Michael Manley's bold initiatives in the 1970s to press for a New International Economic Order that we, in our naivety, think that all we have to do is to fix up our own little boat, Jamaica, as a rising tide will surely lift all boats. I hope our technocrats at the Ministry of Finance, the Ministry of Economic Growth, and the Ministry of Foreign Affairs have read Dr Cyrus Rustomjee's paper( April 2017) from the Centre for International Governance, Innovation titled 'Pathways through the Silent Crisis: Innovations to Resolve Unsustainable Caribbean Public Debt'.

Rustomjee makes a solid case for engaging the international community to pay attention to the unique debt challenges of small Caribbean states.

A sobering IMF paper published last year, Gone with the Wind: Estimating Hurricane and Climate Change Costs in the Caribbean, showed that economic damage to the capital stock of the Caribbean could be underestimated between 38 and 72 per cent and could be as high as 5.7 per cent of GDP annually on average because of natural disasters. Between 1950 and 2014, there were 581 tropical cyclones - 298 tropical storms and 283 hurricanes that either made landfall or were within 69 miles of us.

In the IMF paper on small-state resilience, there is commendable emphasis on the fact that international financing has been misdirected to mitigating greenhouse gas emissions rather than helping small states adapt to the effects of global warming that we are already experiencing. The IMF itself says that small states'needs are underfunded to the tune of $1 billion. "Complex and administratively cumbersome procedures for establishing eligibility for climate-change financing are hampering access by small states with weak capacity."

And this is why our foreign affairs ministry is, counterintuitively, one of our most important ministries. We must not be beguiled into thinking that all we have to do is to get the macroeconomic fundamentals right. That's nonsense and betrays colossal ignorance about development issues. There are things we can't do for ourselves. and our technocrats at the Ministry of Foreign Affairs need to be lobbying for us in international fora to get certain policy changes. Our Ministry of Finance technocrats must be negotiating with the IMF keenly aware of global issues and sensitive to Jamaica's discreet needs.

Well, this November paper makes a strong case for us. It points out that small states benefited "much less than larger countries from the 2015-16 reforms to access under the [emergency financing facilities and instruments] ... which are important sources of rapid liquid support". They find "current access limits constraining in relation to (small states) large balance-of-payments needs for the most severe disasters".

Our developing-country officials should be pressing institutions like the IMF, the World Bank, and the Inter-American Development Bank on these issues. The IMF says, "Small states should be encouraged to consider more active use of the Fund arrangements ... as a vehicle for resilience-building policy reforms ... ."

More questions: "Do directors see the value in IMF assessments of macroeconomic policies related to climate change mitigation and adaptation? Do they favour exploring such assessments ... for small states in partnership with the World Bank?" Well, on May 5, the directors positively responded to the paper and issued a press release accompanying its new paper titled Large Natural Disasters Enhancing Financial The Safety Net for Developing Countries. It doesn't go far enough, but it's a start, and it shows openness to dialogue.

Our policymakers and technocrats must walk through the door and make a potent case for greater development support. It would be a human-induced disaster not to do so.