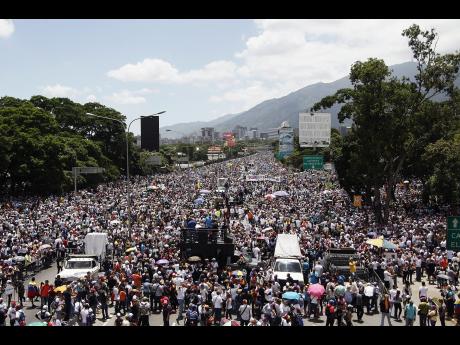 AP
Opponents of President Nicolas Maduro gather to block a major highway in Caracas, Venezuela, on May 20. Tens of thousands of demonstrators took to the streets again in what has been two months of near-daily street protests. The political unrest has left scores of people dead. 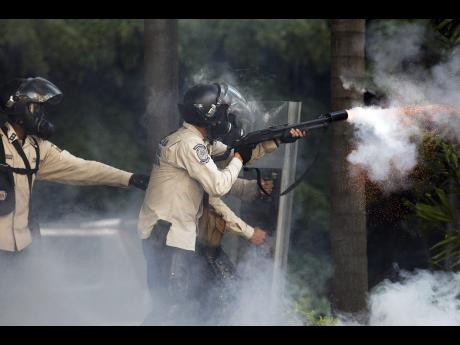 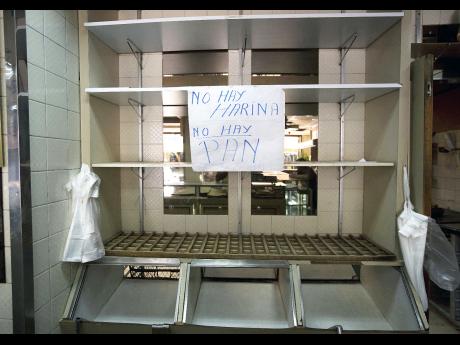 AP
In this March 20 photo, a handwritten message that reads in Spanish, ‘No flour. No bread’, is taped to the edge of an empty shelf at a privately owned bakery in Caracas, Venezuela. Russia is offering to alleviate Venezuela’s food-shortage crisis. 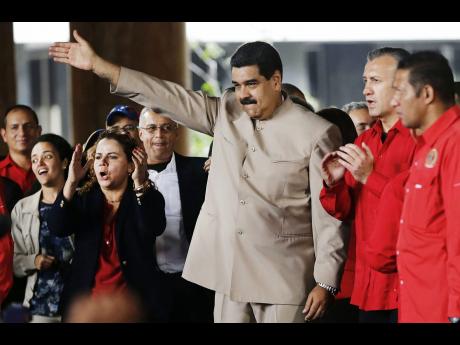 AP
Venezuela's president, Nicolás Maduro, waves to supporters outside the National Electoral Council headquarters in Caracas on May 3. 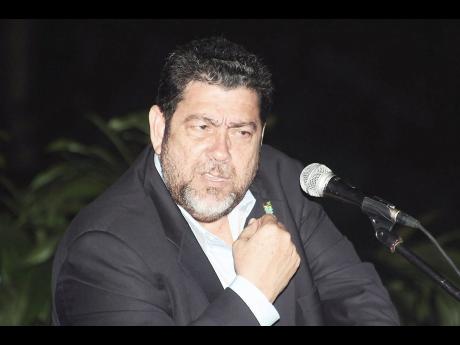 File
Ralph Gonsalves, prime minister of St Vincent and the Grenadines, has criticised the Luis Almagro-led Organization of American States on its stance against Venezuela’s Maduro. 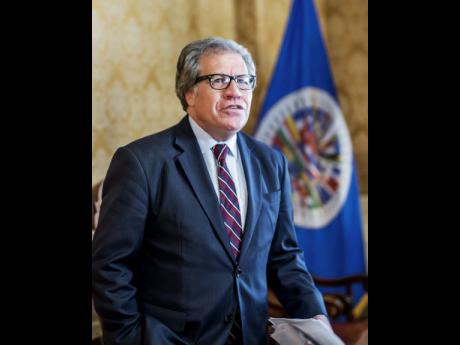 The prime minister of St Vincent and the Grenadines, Comrade Ralph Gonsalves, can't see what some people are getting worked up about regarding Venezuela. "There is no mayhem or a humanitarian crisis of an extraordinary kind that justifies any international intervention." By which he means not even any special meeting to discuss what's going on in that country.

Yet, Venezuela is a country whose economy has shrunk by 10 per cent last year, more than war-torn Syria. Its inflation has been estimated at 720 per cent, nearly double that of failed state South Sudan. The New York Times reported on May 14 that Venezuela's murder rate in 2014 was equivalent to the civilian casualty rate in 2004 Iraq. Last year, the Venezuelan Pharmaceutical Federation estimated that 85 per cent of medicines were unavailable or difficult to obtain. Soap and toilet paper are scarce. Diseases like diphtheria and malaria, which had previously been eliminated, have reappeared.

A study showed last year that as much as a shocking 87 per cent of the population doesn't have enough money to buy basic foods, and another study showed 30 per cent of school-age children to be malnourished. Three-quarters of Venezuelans are said to have lost weight under what has been called 'the Maduro Diet', as more than two-thirds of basic goods are scarce. The infant mortality rate increased by an astounding 66 per cent last year, resulting in the sacrificial offering of the health minister.

Protesters are being killed in the streets, and President Maduro is increasing his autocratic hold on the country's institutions. The country's leading opposition figure, Leopoldo Lopez, is in jail, and former presidential candidate Henrique Capriles is banned from holding office. Human Rights Watch issued a report showing that tens of thousands have fled the country, seeking refuge in neighbouring territories.

An article in the Washington Post on Wednesday, 'Venezuela is sliding into anarchy', notes the increasing violence in the country and says, "Venezuelan security forces and the pro-government motorcycle gangs have met the unrest with escalating force and in some cases, with lethal gunfire, making matters worse. At least 55 people have been killed in the past seven weeks ... . About 1,000 have been injured and 346 businesses have been looted or burned."

The Post quotes one analyst as saying, "The danger is that a spiral of violence will overwhelm the capacity of either side to control it. The more people die, the more the more the anger grows and the more willing the Government becomes to respond even more violently." The news on Tuesday that a vote would be held to elect a 'constituent assembly' with the power to rewrite Venezuela's constitution is likely to spark more violence, as Maduro's opponents are boycotting the assembly.

The international community, more particularly, regional governments and institutions like the Organization of American States (OAS), cannot be indifferent to what is taking place in Venezuela. The decision of the Supreme Court to walk back from its decision in March to dissolve the National Assembly following international outcry shows the impact of 'intervention'. International diplomacy is very important.

Unfortunately, the OAS secretary general has compromised his position and squandered his impartiality and consequently, his ability to help broker an agreement on Venezuela. His strident, incendiary comments against the Maduro regime have alienated the administration and made it difficult for the OAS to play the kind of mediatory role it is supposed to be playing.

Well, let's admit that the OAS was set up as largely an instrument of US imperialism and a tool of the Cold War. We understand its history and we know that it has been used generally to advance US interests, but usually, its secretary general displays a little more tact and subtlety than General Luis Almagro. But the crisis in Venezuela is too intense and the suffering of the Venezuelan people too great for us to use Almagro's indiscretions to invalidate any positive role that the OAS could play in bringing about a solution to the political crisis.

CARICOM, which has had a special relationship with Venezuela, must play its role in trying to put an end to the political crisis in Venezuela. Only then can the major economic and social issues be dealt with. CARICOM must not be immobilised by its internal disagreements and dissension. While we seek unity, there must be an understanding that CARICOM is not a monolith. Dissension is not necessarily unhealthy.

Gonsalves, a sharp, progressive mind with a history of commitment to people's struggles, must be criticised, but not ostracised. We need his input, but we have to remind him that blinkers can impair vision. No reflexive anti-Americanism or defensiveness towards socialist states is healthy. We have had a tendency in the Caribbean Left to support regimes rather than people, and to excuse socialist regimes for all kinds of atrocities and anti-democratic behaviour simply because of their ideological commitment and opposition to US imperialism. The opposition to US imperialism does not give any regime the right to trample the rights of its people.

Lecturing us about the well-documented history of American abuse of power and support for autocratic regimes in this hemisphere is pure blindsiding and diversionary scapegoating. We have cut too much slack to dictators and oppressors of their own people who have waved socialist flags and paraded their anti-imperialist credentials to get a pass. Enough is enough! That Maduro and his predecessor, Hugh Ch·vez, have done some good by their people is indisputable.

While Transparency International has shown that Venezuela ranks an appalling 166 out of 176 countries in the corruption index, and petro dollars have been misused, Ch·vez and Maduro have made their contribution to social development. The country's poverty rate fell from approximately 50 per cent in 1998, the year before Ch·vez was elected, to 30 per cent in 2012, the year before his death.

Prime Minister Gonsalves has talked about how many elections have been held in Venezuela, citing that in defence of the Venezuelan regime. The prime minister knows better than that. He is one of our brightest Caribbean leaders and is a serious intellectual. Gonsalves knows of the phenomenon of 'illiberal democracy'. In fact, that is becoming an all too common feature globally. And Gonsalves, as a socialist, knows of the common criticism by the Left that democracy is more than five seconds in a polling booth. He knows that progressives and socialists have traditionally lashed sham democracy practised by capitalist states. Don't come with that in defence of the repressive Maduro regime whose security forces have attacked and detained journalists. It is not enough that Maduro was democratically elected: The people have a right to democratic rule, not just democratic elections.

Besides, Gonsalves' stress on "non-intervention in the internal affairs of states" is a common defence used by authoritarian states like China and Russia to overlook atrocities in client states, while also using that as a fig leaf to cover their own democratic nakedness. China has used that pretext to continue pouring money into brutal dictatorships, partly as a cynical justification and defence of its own contempt for democratic rule.

The brilliant neo-conservative scholar Robert Kagan has written eloquently about how the rise of authoritarian states like China and Russia threaten the global democratic order, as their influence bankrolls oppressors who trample human rights.

The abuse of the Westphalian doctrine of national sovereignty over the now United Nations-accepted Responsibility to Protect Doctrine is vulgar convenience. The philosophical grounding of the Responsibility to Protect Doctrine, which recognises that human beings have inalienable rights that are universal and transnational, commits CARICOM states and the OAS to have a natural interest in engaging with the Venezuelan crisis.

I agree totally with our prime minister, Andrew Holness, in his letter to Gonsalves: "When the essential elements of democracy such as the separation of powers ... and the exercise of power in accordance with the rule of law are not adhered to, then the OAS is the appropriate forum for deliberations on such matters". That's no imposition, Prime Minister Gonsalves. The Left has a responsibility to lobby for the protection of the rights of the people over the right of any state. Andrew Holness is on the right side of history on this one.