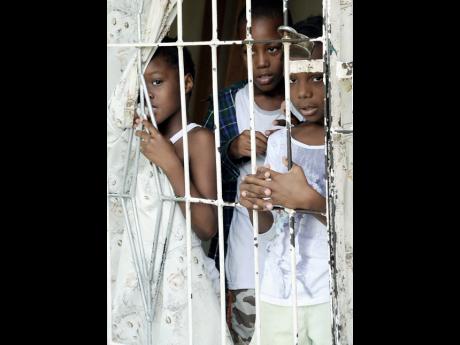 Rudolph Brown
Children who had been hemmed in – first by gunmen loyal to Christopher Coke and then by the security forces – look out from behind a grille to their home in Tivoli Gardens on May 27, 2010. West Kingston had been rocked by three days of intense fire fights. 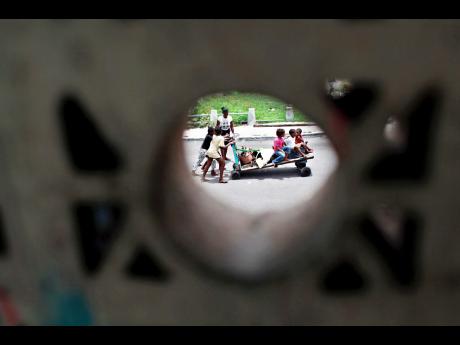 Rodrigo Abd
Children of Tivoli Gardens, west Kingston, are seen through an aperture playing with a cart on May 29, 2010. 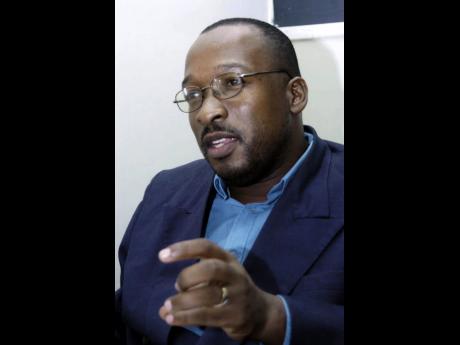 During the infamous Tivoli incursion of May 2010, I was living in a section of rural St Andrew that afforded me close to a bird's-eye view of Kingston's west end.

The plumes of smoke seen through my binoculars and soft thuds from a little more than 10 miles away told me that the inevitable raid by the security forces had begun. It was always a given, to my way of reasoning, that Dudus would not be surrendering, and, for the first time at last, the police and the army would not be backing down.

Seven years later, Dudus is incarcerated in the USA, and the scars that resulted in the death of 69 people are now being felt in west Kingston youngsters acting out their human scars on the city.

It was always known that the police hated everything that Tivoli Gardens represented and they wanted to clean it up. Fifty years from now, we may never know how to separate the innocent from those who were firing guns.

One thing is certain: There had to have been 'collateral damage'.

The scars sown in Tivoli Gardens would be explained by some youngsters seeing their fathers, uncles, brothers, friends killed. And on top of that, coming close to their own deaths after being beaten by some members of the security forces.

Although the official word would have been different, the reality inside Tivoli on those days in May 2010 would have been that the people are the enemy. The violence had to have been prolonged and widely targeted.

The philosophical argument governing violence in any polity is that only the State has the right to exact violence. That, of course, is grounded in the assumption that the agents of the State must at all times act to 'serve, protect and reassure' and that extra judicial killings are punishable under the law.

The reality is that for too long, policing in Jamaica has been all about throwing more muscle at criminality. In this process, many innocent youngsters have been killed. Many have also been taken in by the police, beaten and released, but the scars inside hurt more than the bruises on the chest.

Many are the new gang members bearing the hidden scars. Just as how many turf wars are being fought over feuds that started 20 years ago and divided two or three lanes into warring sides, so are the youngsters of west Kingston hurtling into the only curve they know: a downward spiral.

The trap the society finds itself in is that it is powerless to adjust the violence template. It reads like this. The Jamaica Constabulary Force (JCF) knows that modern policing requires more soft policing, intelligence gathering, and application of forensics instead of kicking down doors and blowing away the bodies of young men.

But many in the JCF know that the youngsters with guns have no intention of playing by society's rules. So this forces the police and the army into throwing more muscle at the violent-crime problem. And the cycle of violence continues.

Just as how the agents of the State have assumed the right to be the only perpetrator of violence, so do they know that they have the power to dictate the level of their own violence. In theory, they can turn off the spigot. Wrong.

The gunman is not prepared to give up his power. The gun. And so it continues.

In his other articles, he sometimes uses the descriptor 'apostle', but even so, his article is riddled with religious dogma. My first response after glancing at the title was to say to myself, 'Oh, so that explains me'. Then at just about the same time, I had one extended belly laugh. Chupski read it and almost choked with laughter and disbelief.

Huh? Is this for real? There is no serious body of sexual research that points to this wild conclusion, which Lyston seems to have clutched out of thin air. In fact, among many women who have difficulty reaching an orgasm the 'normal' way, a patient husband and joyful experimentation can often lead her to climbing her mountaintop of pleasure.

Say, what! This is just so patently untrue - that part about restless nights and one's spouse. The rest about incubus and succubus is, well, his mind deep in the mix of religious dogma and duppy business.

His article is reminiscent of what must have been the teachings of the elders in the early Church. Take the pleasures of life unto ourselves and deny our flock of those too-earthly pleasures. Like a feudal lord to his serfs.

Steve Lyston contorts reality to suit the purposes of penning an article that is worth little more than comedic relief. But I really do believe that he believes the stuff he writes. That there are others who share his belief is a scary thought.

In his world, sex is like Sunday dinner, and grace must be said. He writes, "The diversion from the natural purpose of what God intended sex to be will bring pollution, especially of the mind and spirit."

In his world, all the parts must be in the right place, like the cutlery and the plates at the dinner table. He creates an unreal place and begs us to inhabit it. And if we do not, we will be polluting our souls. What utterly mindless reasoning!

Tell me one person who has never used his or her imagination during the sex act. Does that in anyway defile the beauty of the blend of mind and body?

As long as no names are shouted.

- Mark Wignall is a political and current affairs analyst. Email feedback to columns@gleanerjm.com and observemark@gmail.com.