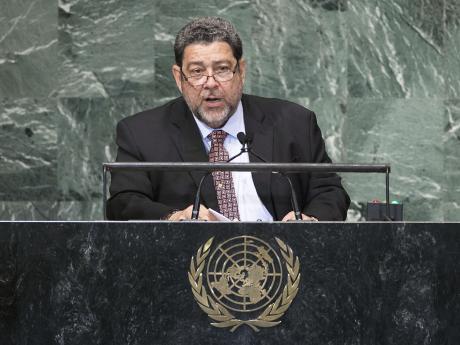 When Ian Boyne purported to suggest that the esteemed prime minister of St Vincent and the Grenadines is "blinkered" on Venezuela, he only succeeded in showing his own limited vision.

It is often the case that a man who holds himself up as a model of impartiality actually exposes naked bias and one-sidedness that can sometimes boggle the mind.

Before dealing with the substance of Mr Boyne's arguments as published in The Gleaner on May 28, 2017, (if it can be said that they had any substance at all), I would like him to know that I object to the scant regard and mock respect that he paid to my prime minister.

I was hoping that Mr Boyne would have been able to muster more than a grudging acknowledgement of the fact that Dr Gonsalves is the longest-serving head of government in CARICOM and that he brings a vast wealth of knowledge and experience to the table.

Mr Boyne took great pains to try to paint a grim picture of the current socio-economic and political situation in Venezuela, but he only managed a passing comment on the progress that country has made under the Bolivarian Revolution. It is quite inadequate for him to simply say that Ch·vez and now, Maduro, have done "some good" for the people of Venezuela. That is a classic understatement.

It remains insufficient if there is only reference to the dramatic reduction in poverty that took place while Ch·vez was in office. What Ch·vez and his successor were actually able to achieve in the past 18 years is nothing short of remarkable, or even miraculous, especially when you consider the fact that Venezuela is known for its precarious and sometimes precipitous and perilous politics.

Naturally, because of the thrust of revolutionary policy, which prioritised a concern for the independence and welfare of Venezuela and its surrounding underdeveloped regions, Ch·vez came into conflict with The Empire, which perceived him to be a threat to its political hegemony in this hemisphere.

Imperialism struck back with full force through all manner of destabilisation attempts, the latest of which is currently manifesting itself. Since the dawn of the Revolution, there have been ceaseless efforts by foreign forces in alliance with local accomplices to undermine the Venezuelan government, derail the Revolution, and stymie the development of that country. But the Revolution is still standing.

I sometimes wonder if things would have come to this point under the direct leadership of Hugo Ch·vez. Ch·vez was a one-of-a-kind leader, and he demonstrated an amazing and awe-inspiring penchant for triumph over adversity, be it in the form of an attempted coup against him, an attempt at economic strangulation, or in some other shape or form.

There must be a reason why Ch·vez chose Nicol·s Maduro as his successor, and I am confident that Maduro would ride out this storm and emerge as a stronger and better person and leader. After all, there is a saying that we acquire the strength we overcome. This recent episode is just another saga in the long-running battle to dismantle or break the back of the Bolivarian Revolution.

Mr Boyne's article was accompanied by images of protesters in Venezuela. Why weren't there also pictures of large crowds that rallied to support their president? Could it be that protesters have taken recourse to unnecessary, unprincipled, and lawless actions in instigating violence as a part of their bid to overthrow the government? Is it possible that Opposition forces with external support are involved in violations of human rights? Are we suggesting that no one has been harassed, assaulted, molested, or killed because of love and loyalty to the sitting government? Does the Opposition hold out the promise of a better Venezuela, region, and world?

We accept that the situation in Venezuela as fermented by imperialism is far from ideal. However, PM Gonsalves was right to say that there "is no mayhem or a humanitarian crisis of an extraordinary kind that justifies any international intervention". As far as I know, President Nicol·s Maduro has in no case acted ultra vires of the Constitution and his powers. In fact, he has made several generous and unnecessary concessions to his opponents. In all this, it is important to remember that Maduro was duly elected president of Venezuela and he has a term of office that will expire in December 2018.

Maduro is also open to dialogue. Actually, mediated discussions were taking place between the government and the Opposition until the Opposition abandoned these talks earlier this year when it felt that it had gained the upper hand or a tactical advantage.

They became all the more strident when the shameful secretary general of the OAS started to prattle and prance about the place in open advocacy of regime change in Venezuela. Secretary General Luis Almagro violated the terms of his employment as a regional civil servant and disregarded the charter under which he functions. But he wants to talk about Maduro, who is abiding by the letter and spirit of his guiding laws.

Mr Boyne performed great feats of mental gymnastics in his article. The part that absolutely floored me is where he acknowledged that the OAS was created as an instrument of American imperialism and a tool of the Cold War, and further, that the Organisation was brought into disrepute by the conduct of its secretary general, yet still maintaining that this discredited outfit can somehow play a leading, helpful, and constructive role in dealing with the Venezuela conflict. Get real!

Dr Gonsalves called it like it is in his letter to regional colleagues on Venezuela, and I saw an approving response from Prime Minister Gaston Browne of Antigua and Barbuda.

I also saw a letter from Jamaica's Prime Minister Andrew Holness in which he contested the position of PM Gonsalves. I won't be surprised if I discovered that Mr Holness was under the influence of Ian Boyne. The articulations of PM Gonsalves apparently enjoy wide consensus in the region, and I hope that CARICOM will work out its differences, push forward with a united front, and help save the day.

PM Gonsalves correctly emphasised that the first constructive thing CARICOM could do in relation to Venezuela is ask all parties there to respect the rule of law. Our regional leaders should also insist on respect for sovereignty and territorial integrity and an adherence to the principle of non-interference in the internal affairs of a country as enshrined in the charters of the United Nations, the OAS, and other similar documents. CARICOM heads should then seek to promote among the warring factions a dialogue on the contentious issues with a view to resolving them.

By the way, Ian Boyne should not seek to give the impression that he is the only one interested in what is best for ordinary Venezuelans. Nor should he attempt to pronounce on who is and who is not on the right side of history. That is a matter far beyond his competence. He needs to understand the limits of his role as a neo-conservative mouthpiece and boldface agent of imperialism. In other words, he should concentrate on his stock and trade of mindless parroting and recitation of inaccurate Western stylised and popularised 'alternative facts' and leave my PM alone.

- Luke Browne is minister of health, wellness, and the environment in St Vincent & the Grenadines. Email feedback to columns@gleanerjm.com and lukebrowne@yahoo.com.