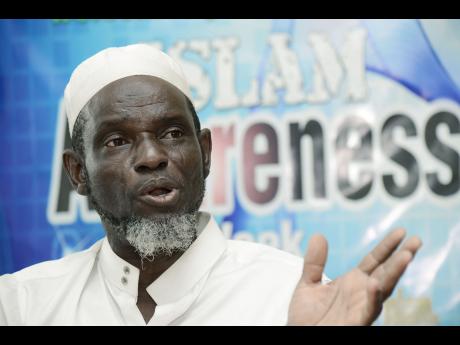 Rudolph Brown
Sheikh Musa Tijani, director and head of education for the Islamic Council of Jamaica.

My first link was with Tim, a 30-something ardent adherent to Islam. "I am certain that if you speak with the leadership, they will tell you the same thing. The Qu'ran expressly condemns the killing of innocents. The killing of even one is seen as the killing of all. It is reprehensible and it is never to be condoned."

Although the Muslim community in Jamaica is small, at an estimated 6,000, what separates it from Christians is its lack of a denominational structure, like, say, Anglican, Presbyterians, Baptists, etc., there are no Sunni or Shi'a Muslims attending the various Masjids throughout Jamaica. Just Muslims.

On Thursday, as I made the link with Sheikh Musa Tijani at the Islamic Council, he repeated what Tim had told me. "Muslims in Jamaica are very united, but especially so in our view of violence and killings. We are guided by the Qu'ran, which states the killing of an innocent is like the killing of all humanity."

He was responding to my questioning about the recent terror attacks in London and Iran. "Apart from the teachings of the Koran, the Muslim community meets regularly and we ensure that the typical Muslim is an educated Muslim. They have duties to each other and to the community and we do not subscribe to any sectarian poses. They are simply Jamaican Muslims."

Unlike, say, the Mormons in Jamaica, who are always active in recruitment, one gets the sense that it is personal, one-on-one conversations that lead to new members eventually becoming regular mosque-going Muslims.

There exists a clash of views as to what motivated the birth and the rise of ISIS. Many in the Western world would prefer to sweep under the carpet the reality of 'the coalition of the willing' boots on the ground in the Iraqi invasion that began in 2003.

A recent article in the Guardian lays out its view as to what ISIS is.

'ISIS adheres to a puritanical Sunni strain of Islam and considers Shi'as apostates. While it has carried out many attacks in Iraq, it has been unable to strike inside Iran itself, a Shia state.

Extremist Sunni militants have often stated their intention to attack Iran, portraying it as an imperialistic power that is oppressing Sunnis around the region. However, they have very rarely been able to carry out major operations inside the country.

'The attack comes at a time of great regional tension, with Iran and its regional arch-rival Saudi Arabia trading accusations of sponsoring terrorism. The coordinated assault will further stoke those tensions."

It is usual that at a political divisional office such as the one in Greenwich Town, where divisional secretary Maxine Simpson was recently shot dead and Councillor Karl Blake injured, interlopers would never be a significant concern.

My sympathies go out to the relatives and friends of Ms Simpson, and the entire nation is rooting for a full and speedy recovery on the part of Councillor Blake.

In the years prior to 2006 when I would have hours of telephone time to chat with Portia, she would relate to me, in similar fashion to many other MPs, the reality of attending one's constituency office. "Sometimes, if I was not careful," the soon-to-be-PM said to me, "I would spend all of my pay as an MP at just one visit."

She pointed out to me that people were showing up with school fee bills, some telling her that their roofs leaked so bad during rain, they were better off staying outside. They were looking for a few sheets of zinc. She told me about a man who sat in her office and lifted up his leg to show her the state of his shoes. It was all uppers and there was no sole.

The point I am making is that at constituency and divisional offices, the cream that rises to the top in political fanaticism hangs out at those places. All of the street elements that the politician does not want the public to know he or she associates with are usually there.

It is a gathering for the good, the bad, and the ugly - especially the latter two.

I am certain that by now, the police will have figured out who was the direct target and what generated the shooting. It could turn out that it is political - as many believe it is. Or very definitely not so.

What cannot be allowed to happen in this time of murders running rampant as they have always been in modern Jamaica is a return to that dangerous intersection with our politics - where it all began.

Opposition Leader Peter Phillips is obviously not a man to be envied at this time. The extent to which he has been trying to mend the factionalism will not be helped by this tragic shooting incident.

It matters little that aspirants for Portia Simpson Miller's safest PNP seat in the island are champing at the bit as they draw into their minds her hasty exit, especially when it is thought that politics is Portia's life.

What do they want her to do? To retire and go home and for the first time in her long years in politics become a footnote? That will not be happening soon, so my message to them is this: Lie low and wait, and wait ... . And wait.

Having been stung by the political taint of a loss in February 2016 and findings that her refusal to debate in the election campaign was a big factor in the PNP's loss, there is just no way that anyone is going to get Portia to crawl away and hug up a rocking chair.

What do they want her to do? Go home and watch reruns of her speeches? Won't happen. Some of us know, but not many of us are willing to state what we know, about her massive win in 1976 when the PNP secured the biggest ever win in Jamaican politics, and in Portia's South West St Andrew constituency, the turnout was in excess of 100 per cent.

I first heard Colin Campbell's name associated with South St Andrew as replacement for Dr Omar Davies, the failed finance minister of the 1990s. When Mark Golding swatted that brief flirtation away, I heard that Campbell had his eyes on Portia's seat.

Poor Colin. Had he not suffered enough during the botched shady Trafigura arrangements? Then I heard ex-Kingston mayor, Angela Brown Burke, was interested in Portia's seat.

What is it with these politicians? Do they not wish anymore to compete? To share their ideas on a loud political platform and to give voters a chance to make a decision?

No, that would be too inefficient. Better to walk into a seat that has been brainwashed for the last 40-plus years into hating anything named JLP and to embracing anyone just so long as they represent the orange of the PNP. So Portia, for what it is worth, this is my advice to you. As long as you still enjoy reasonably good health, continue to attend Parliament and make them wait. And wait.

If the aspirants are worth more than their weight in gold, they must put themselves on the open market and be prepared to compete in any of the 63 seats. In a selection first, then election. Retirement is not all that it is made out to be. Boredom and a sense of worthlessness set in quite early, and those factors do not make for a good heart, a good system. Soldier on, Portia!

- Mark Wignall is a political and public-affairs analyst. Email feedback to columns@gleanerjm.com and observemark@gmail.com.