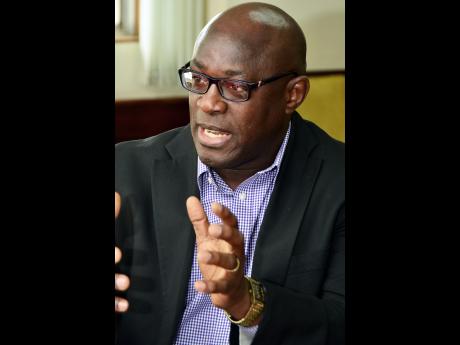 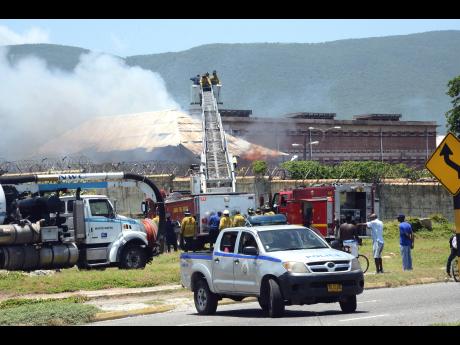 Norman Grindley
Firefighters trying to contain the blaze at the Tower Street Adult Correctional Centre in downtown Kingston, which destroyed the George Davis Centre, which housed mentally ill inmates at the prison.
1
2

Let me begin with a declaration. I once served as a consultant in the Ministry of National Security and had special responsibility for strategic projects and modernisation. I was the Government's chief negotiator responsible for the now-infamous United Kingdom prison deal under which Jamaica would have secured a grant of £25 million to construct a new correctional facility, plus another £5 million for rehabilitation and reintegration activities, over a four-year period. (All of the facts I will discuss in this article are a matter of public record, thus there should be no anxiety as to my breaching any confidentiality or secrecy requirements).

The current Government determined that it was not interested in accepting the UK's offer. In my opinion, the decision of the Holness administration was ill-advised and appeared to be more about optics and political expediency rather than about a difference in ideology, policy, or interpretation of the facts concerning the state of Jamaica's correctional facilities.

The recent fire at the Tower Street Adult Correctional Centre has once again brought into sharp focus the condition of the country's correctional facilities and the need for action. The public pronouncements of both Minister Montague and Junior Minister Charles Jr, including Charles' most recent utterances, remind me of a person who faces a problem but refuses to call the problem by name. Both ministers seem to be under an executive order not to use the words "we need a new prison".

But the facts in the public domain show that both the JLP and PNP have been giving consideration to building a new maximum-security facility for decades. The Bruce Golding administration commissioned a physical assessment of the country's two main correctional facilities - Tower Street and St Catherine. The reports were completed in 2010 and concluded that both facilities were centuries old and had outlived their useful lives, with some sections posing major health and safety risks for both staff and inmates.

A 1997 study published by Amnesty International found that Jamaica was in violation of Article 10 of the International Covenant on Civil and Political Rights, to which the country was a signatory. Article 10 states, in part:

"All persons deprived of their liberty shall be treated with humanity and with respect for the inherent dignity of the human person ... (and that) the penitentiary system (of a country) shall comprise treatment of prisoners, the essential aim of which shall be their reformation and social rehabilitation."

The Covenant is predicated on the principle that "recognition of the inherent dignity and of the equal and inalienable rights of all members of the human family is the foundation of freedom, justice, and peace in the world".

The government of the day had actively sought to address the deplorable conditions in the two maximum facilities, but rather than continuing to patch up broken and dilapidated walls, the then minister of national security he would commence the phasing out of these centuries-old facilities and instead begin to build new ones. Thus, the project to construct a 300-bed facility at Tamarind Farm was born.

In light of this act of independently using its own resources, the Government was in a position to negotiate harder with the British when they approached the minister in 2013 as they had done with successive ministers since early 2000. The former minister reported that he took the view that the Government would only consider a proposal from the British if it came with a substantial grant. The previous offers carried no offer of financial help.

State Minister Pearnel Charles Jr made an announcement, reported in the Jamaica Observer on May 10, 2016, that the Government was going to build "300 more cells for Tamarind Farm ...". It would appear that either the Jamaica Observer or the minister was mistaken as the report gave the impression that as at May 2016, the construction was a proposal when, in fact, the building was near completion.

I make this point to indicate two things. First, the Government's seeming equivocation about the need to build new correctional facilities, where, on the one hand, it seems to be claiming paternity for the project at Tamarind Farm (a medium-security facility), but on the other, seems unwilling to boldly assert that the existing maximum-security facilities ought to be replaced.

Some may recall the consternation shown by Attorney General Malahoo Forte in response to news reports that people held in lock-ups in Montego Bay were sharing the space with rodents and roaches. I recalled tweeting that the Government, through its legal adviser, cannot, on the one hand, be consternated by what was happening at the St James lock-up yet insisting that it would not touch Tower Street or St Catherine.

The NWA report (mentioned above) carried pictures of columns and beams that were falling apart and walls that had gaping holes from foundation to belt. Added to that is the fact that these facilities were built in the 17th and 18th centuries, but not as prisons - which are occupied for years - but holding areas for slaves who would be there for at most a few days to a couple of weeks, awaiting transportation to the plantations.

But what is more, whereas these slave-holding areas were created with a capacity of 800 people each, the facilities had typically been holding up to two times that amount. All of this information is public knowledge. But no politician, in any country, gets high marks for paying attention to the conditions under which prisoners live, for, in their view, in the minds of voters, 'prisna fi suffa'.

Foreign Minister Kamina Johnson Smith did not fully explain, if she did at all, why the Government rejected the UK offer, but the basic argument, as later articulated by other government spokespersons, was that the offer represented only 40 per cent of the cost and the Government would have to tax the country to find the other 60 per cent. Critically, if a country is getting a 40 per cent grant to solve a major problem that it has a moral and legal obligation to solve, does it not represent a dereliction of duty if it fails to find the other 60 per cent? Would it not be possible for the Government to come up with the 60 per cent over three or four fiscal years?

One wonders what would happen, God forbid, if a block at one of these facilities should crumble and inmates and staff are hurt or killed. Can anyone conceive of the national security threat the country, and the region, would face in the event that there is a prison break from either Tower Street or St Catherine?

With murders rising, can anyone imagine the fear in which people would live and the threat that would face the society if all inmates have to be housed in other less-secure facilities? The Government had better take the fire at Tower Street as sleep and mark death.

Ronald Thwaites, in whose constituency Tower Street is located, welcomed the idea of relocating the prison and transforming the lands into high-end, seafront real estate. With a government touting jobs and economic growth as its primary agenda, is not the building of a new prison and transforming prime real estate into a tool of job creation and economic growth not an obvious win-win? With the building of a $10-billion facility, jobs would be created and several layers of economic activity spurred. That would have a positive ripple effect on the economy.

- Dr Canute Thompson is head of the Caribbean Centre for Educational Planning, lecturer in the School of Education, and co-founder of the Caribbean Leadership Re-Imagination Initiative. He is also an author. Email feedback to columns@gleanerjm.com and canutethompson1@gmail.com.