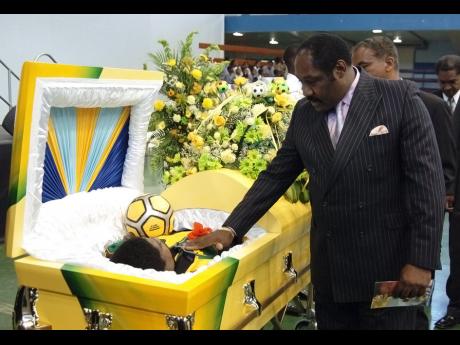 Ricardo Makyn
Then former Jamaica Football Federation President Horace Burrell pays his final respects to Reggae Boy Peter Cargill during the memorial service for the former national player at the National Arena on May 4, 2005. Burrell returned to the presidency two years later and held it till his death last week.

About the same time that Captain Horace Burrell died, I lost a dear friend and a treasured member of my congregation, Khari Ballantine. As his pastor, I had gone to see him in intensive care at the University of the West Indies on Saturday night. The once-vibrant mind was non-responsive, his body in convulsion, his spirit indiscernible. I went back to see him a few minutes after he died.

Life's but a walking shadow, a poor player

That struts and frets his hour upon the stage

And then is heard no more;

it is a tale

Told by an idiot, full of sound and fury

So says Shakespeare's Macbeth. Existentialists like Camus, Sartre, and Nietzsche have written poignantly and grippingly about the apparent meaningless of life indeed, its absurdity and tragedy. We drown ourselves with everyday pleasures and distractions to keep us from agonising over our mortality, and the lucky few spend a lifetime in seemingly important pursuits only to be snatched away by death.

I have been thinking a lot about mortality in the last few weeks as I have lost some dear friends and relatives. But then again, I have been thinking about it since I was a teenager. It was at 15 that I began reading philosophy. I remember going down to the Institute of Jamaica to read books on Plato, Hume, and Kant. I had read a booklet by Herbert W. Armstrong titled Why Were You Born? It was a question I had never thought about before but have not stopped thinking about since.

I was then in school but more interested in football, track and field, music, and girls. Armstrong introduced my young mind to questions of existence and purpose. I remember going to school and asking my friends why they were born, with everybody giving me a strange look for asking such a weird question.

But how can anyone live without asking himself that fundamental question? Society brainwashes us to pursue materialistic goals. It sets our values and priorities, and we unthinkingly follow the script. Study hard. Make money. Achieve status, power, and glory. Have fun. Get a lot of sex. Sports is our new religion, entertainment our new opium.

What should I value? I began asking myself that question from a teenager. In my view, it was settling that question of life's purpose that would help to guide me to a career path and help me to decide on what would be worth spending my time on. Perhaps the question of the meaning of life is outside our epistemic ken, as the philosophers would say. It is beyond our knowing. If there is some transcendental purpose to life, our finite minds can't discover it.

Or perhaps life only has the meaning we give to it. Perhaps there is no meaning-in-itself. That's the atheistic, secularist view. Perhaps we will never know. But how can we not be haunted by the view that it is all meaningless? That our pursuits are purely arbitrary? That no accomplishment of ours really has any ultimate value?

One of the greatest Russian writers ever was Leo Tolstoy. After turning 50, with his greatest works behind him, and already achieving celebrity status, he experienced a deep spiritual crisis and depression. He had a large estate, a good wife who had borne his 14 children, and the greatest literary prospect ahead of him. But it all came to mean nothing to him. "To what end?" he began to ask himself. That crisis led him to some of his most profound philosophical musings. His book A Confession details his existential crisis.

"Today or tomorrow, sickness and death will come (they had come already) to those I love or to me. Nothing will remain but stench and worms. Sooner or later, my affairs, whatever they may be, will be forgotten and I shall not exist. Then why go on making any effort? How can man fail to see this and go on living? That is what is surprising! One can only live while one is intoxicated with life; as soon as one is sober it is impossible not to see that it is all a mere fraud and a stupid fraud! That is precisely what it is: There is nothing either amusing or witty about it; it is simply cruel and stupid."

Horace Burrell sends Jamaica to the World Cup. He is lionised. He basks in that glory. Then he is gone, deified by everyone but not around to enjoy it. After a couple of weeks we go back to our lives, and at year end, we remember him again when we do our 'We Lost Them in 2017' year in review. Just a footnote after all those 67 years of achievements and hobnobbing with powerful people locally and internationally.

Lady Cooke dies at 100. Great teacher, great lady, and great patriot. Made the century. But still had to succumb to her mortality. The Stoic philosopher and Roman Emperor Marcus Aurelius says in The Emperor's Handbook: "How swiftly everything disappears bodies in space and the memory of them in time! Whether man lives a long time or a short time amounts to the same thing, for the present moment is of equal duration for everyone ... the man who dies young loses not a jot more than the man who dies old. A man can only be deprived of the present moment."

Which, interestingly, leads Oxford philosopher T.J. Mawson to brilliantly argue in is book God and the Meanings of Life, after exhaustively considering objections, that only eternal life makes sense of life. I know that some of our finest atheists say that it is fallacious to hold that a life has to be eternal to be meaningful. In fact, some argue that it is life's mortality, its scarcity value, that makes it most meaningful and that eternal life would be boring and meaningless. Mawson examines that view surgically and explodes it. Get the book.

Tolstoy makes another thought-provoking point: "My question ... was the simplest of questions, lying in the soul of every man from the foolish child to the wisest elder: it was a question without an answer to which one cannot live ... : 'What will come of what I am doing today or shall do tomorrow?' What will come to my life? Why should I live? Why wish for anything or do anything?' It can also be expressed thus: Is there any meaning to my life that the inevitable death awaiting me does not destroy?"

Great liberators and freedom fighters have fought for causes that have been later overturned. Tyrants have turned back decades and centuries of gains made by people who have sacrificed their lives in struggle. The view that the moral arc of the universe bends toward justice, as Martin Luther King often said, is pure faith.

World-renowned atheist Bertrand Russell, in his essay 'A Free Man's Worship', concedes glumly: "But even more purposeless, more void of meaning is the world which science presents for our belief. ... Man is the product of causes which had no provision of the end they were achieving; that his origin, his growth, his hopes, his fears, his loves ... are but the accidental collocations of atoms; that no fire, no heroism, no intensity of thought and feeling, can preserve an individual life beyond the grave; that all the labours of the ages, all the devotion, all the inspiration, all the noonday brightness of human genius are destined for extinction in the vast death of the solar system and that the whole temple of man's achievement must inevitably be buried ... ."

Is that really all there is, after all the sound and fury?