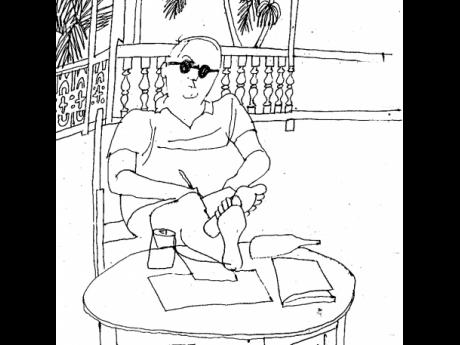 "You've got to be joking! You're going to seek asylum?"

"Yes, I'm starting a trend in Jamaica," my friend replied.

"I don't think most people have heard of seeking asylum unless they want to know the way to Bellevue."

"Very funny," was his response.

"Seeking asylum is defined in international law as what you need to do to avoid persecution or if you are unable to get protection from the authorities."

"Well, the last certainly applies to us in Jamaica," I concurred.

"You will agree that everything has been tried - neighbourhood watches, seminars and consultations, conference and community meetings, academic papers, prayer meetings, even changing the chief of police. We don't need a state of emergency. We need a state of urgency.

"... It seems to me that everyone has been consulted but the criminals themselves ... ."

"... And that's why I need asylum, because Jamaicans aren't able to get the protection they need from the authorities."

"But you must have had other options?"

"Perhaps. Anyway, if I emigrate to Pedro Cays, nobody will know what I'm talking about. Haiti was another possibility, but nearly everyone there is already an economic refugee."

"You're going to have to try a First World country."

"True. But I had to eliminate Spain for historical reasons."

"Spain still wants our island back."

"Anyway, what will happen next?" I enquired.

"We all have to look after ourselves. Personally, I tried living in a gated community, but my neighbour got into a shoot-out with a drug dealer one day. I tried going to deep rural Hanover, but you have probably heard what its murder rate is. So I thought of going offshore, buying an island, but the cost was astronomical. No, I'm going to seek asylum abroad."

"Where do you have in mind?"

"Well, The Bahamas is as near to the States as I can get without having to climb over the barbed wire at the US ambassador's residence."

"What about the rest of us?" I asked.

"The politicians probably think that they're protected once their cars are armour-plated and they are issued with body armour. The PM can take cover in his fortress in Beverly Hills once he gets round to finishing it. P.J. was said to have a chateau in France.

"But, wait a minute. Surely, we Jamaicans should be taking to the streets and demanding action to curb our crime epidemic. Or are we suffering from protest fatigue?" I said.

"I hear Usain is thinking of moving to Monaco, but before he does, he is changing the road signs when you are entering his village. In the future, they will read Sherwood Discontent."

"Humph! It would be better if he led a protest sprint," I began, "Men, women, and children from all walks of life in Jamaica. Aren't we all victims of a crime against humanity?"

"Marches have been tried. The last time I even saw a lady carrying a placard saying, 'White people matter.'

"But the problem is as an asylum seeker, you can claim you will be harmed if you are returned to your own country."

"That's for sure if you return to Jamaica."