Martin Henry | Jamaica 55 : The making of the Constitution 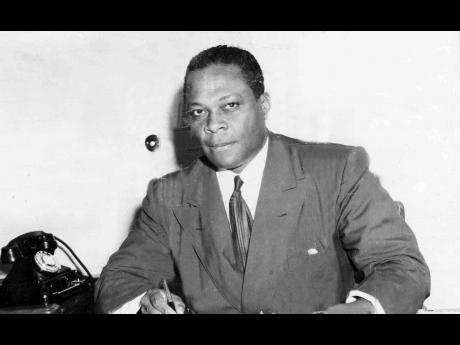 File
Among the 17 citizens who drafted the Independence Constitution for Jamaica in 1962 were Florizel Glasspole, Edward Seaga and David Coore. Said Glasspole in his message: "The challenge of the new era of Independence can only be met by dedicated leadership and a resolute, loyal hard-working people, understanding what is required of them. I repledge that personal dedications and call upon our people to recognise the challenge of the time." 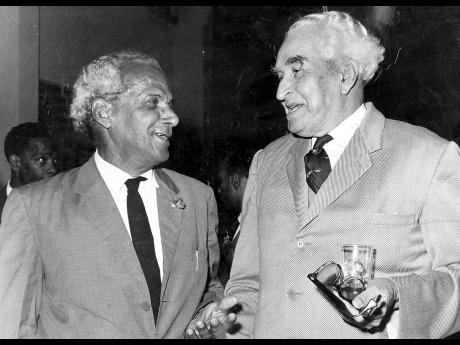 File
Norman Manley (left) and Sir Alexander Bustamante, who were premier and opposition leader, during the crafting of the Constitution. 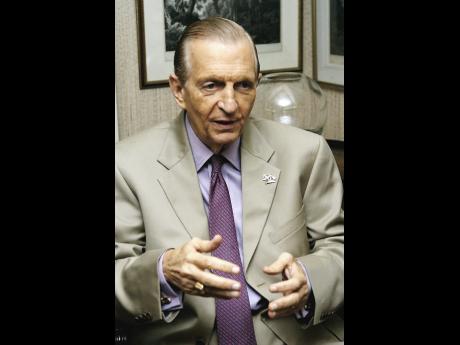 File
Seaga, the only surviving member of the 'Founding Fathers'.
1
2
3

"The Opposition Party under the leadership of Sir Alexander Bustamante co-operated fully with the Government, and Select Committees of both houses of the legislature were appointed and met together under the chairmanship of the Premier on 31st October, 1961, to consider and supervise the preparation of a draft independence Constitution. The reports of the Committees were laid before both Houses in January, 1962, and after full debate, approved unanimously" - The Report of The Jamaica Independence Conference, 1962, Held in London in February, 1962, Presented to Parliament by the Secretary of State for the Colonies by Command of Her Majesty, February 1962.

Reading the Report is almost like handling sacred text. But, like the vast majority of Jamaicans, I didn't even know such a "text" existed until it found me online as I researched the making of the Jamaica Constitution. It's posted by the National Library of Jamaica, the successor since 1979 to the West India Reference Library of the Institute of Jamaica.

Myth has become fact by repetition without fact check that the British colonial authorities handed us a prefabricated constitution and therefore we need to do something to repatriate the Jamaica Constitution and to truly make it ours. The Constitution is ours. Crafted by our own Legislature, negotiated with the Colonial Office in London by our own Constitutional Commission, voted by Parliament, albeit very deeply influenced by 300 years of British law and constitutionalism under which the colony had been governed for 300 years since the 1655 English seizure of the island from Spain.

The referendum of September 19, 1961 had seen Jamaican electors voting decisively against remaining in the West Indies Federation (54.1 per cent). Only six days after that vote, the Cabinet, headed by Premier Norman Manley, on September 25, gave instructions for a working party to be established to determine the steps to be taken to prepare the country for Independence. Mr Manley personally led a Government delegation to London on September 30 to officially report on the referendum decision and to discuss and agree with the Colonial Office procedures for preparing for Independence.

Things moved rapidly. Constitution Committees were established in the House of Representatives and the Legislative Council on October 30. And the very next day both Committees met jointly by agreement to start deliberations. And who were these Founding Fathers of the Jamaica Constitution? Most of them have become household names in our political history going on to further service in governments of independent Jamaica. Three prime ministers, one governor-general among them.

Attending were: Leslie Cundall, the attorney-general, the clerk and deputy clerk of the legislature H.D. Carberry and Easton Soutar, and B.J. Scott who served as assistant secretary to the Joint Committee.

The Gleaner report on November 1, 1961, was headlined, 'Manley's aim Constitution draft by January', which in fact was achieved.

Then it was off to the Constitutional Conference with the British Colonial Office at Lancaster House in London, February 1-9, by a bipartisan delegation. The Independence Agreement was signed on February 9, with August 6 set as Independence Day. Ten days short of five months from referendum on September 19, 1961, to Independence Agreement on February 9, 1962, with a Constitution in place, prepared by Jamaicans for Jamaicans. An intense period of bipartisan collaboration for the birth of the nation.

Contrary to the view of the imposed Constitution, in the Seaga narrative, "From the beginning, Manley introduced the pivotal point of what type of constitution should be adopted." So this was a live issue.

"Some persons were suggesting adoption of an American-type constitution", Seaga recalls. But Manley, the British-trained QC lawyer rebutted the idea. "This, Manley said, was the hardest constitution any country had ever inflicted upon its subjects because: It had an all-powerful president who could not spend a penny without the approval of congress and neither the president nor his ministers were seated in Congress; On the other hand, Congress could pass no legislation without the approval of the president; all legislation was subject to interpretation by the Courts."

Seaga continues, "Mr Manley articulated the position which he felt was shared by the great majority of Jamaicans" when he spoke in the House "on the type of Government preferred: "... We are familiar with the type of government that has influenced the world and has certainly influenced tremendously all the modern governments that are coming into being, and this system of parliamentary government over the centuries has been evolved by the British people who certainly have displayed the most unique genius of any people in history for devising a form of government acceptable to people. And I make no apology for the fact that we did not attempt to embark upon any original or any novel exercise for constitution building. We have a system that we understand; we have been operating it for many years with sense... . It is a system that is consistent with the sort of ideals we have in this country and it was not difficult to decide that we would follow that familiar system with those modifications which we have thought the circumstances of independence deserved... .The basic aim of the constitution which we have drafted was not to experiment at this stage with our future, but to have created something basic and stable."

At the very first sitting of the Joint Select Committee it was "tentatively agreed", according to The Daily Gleaner report, "that the Constitution should be on the pattern of Britain's older dominions and that there should be a Governor-General representing the Queen. And "the question of Jamaica becoming a republic was not raised."

The Report of The Jamaica Independence Conference, 1962, began dryly: A Conference was held on the 1st to the 9th February, 1962 to agree upon a Constitution and the date of independence for Jamaica.

The Report narrated the events of the referendum, its results, and the preparation plans for independence. "The Government of Jamaica", the Report said, "accepted without question the decision of the electorate and immediately put in hand the many and varied measures necessary to seek the withdrawal of the territory from the Federation and the attainment of full independence by Jamaica at the earliest possible date.

At the outset of the discussions between the Manley delegation and the Colonial Office, "the Secretary of State informed the delegation that the British government, no less than the Government of Jamaica, accepted the results of the referendum as a final indication of Jamaica's wishes. [And] the talks resulted in a large measure of agreement on the steps to be taken to enable Jamaica to withdraw from the Federation and to achieve independence on its own."

The bulk of the brief Report outlines the elements of the Constitution essentially as we know them, with sections on: The Governor-General, The Legislature, The Privy Council, The Executive, Finance, The Public Service, The Judicature. Except that Citizenship and Fundamental Rights and Freedoms were placed at the back. The inheritance of international treaty rights and obligations was set out, as well as membership in international organisations and the implications of Jamaica's withdrawal from the Federation, the planned dissolution of the Federation without Jamaica and arrangements for the continuation of its common services which the British Government had proposed. Discussions on economic, financial and defence matters were to be concluded before the date of independence.

Provisions were laid down for the amendment of the Constitution, with its ordinarily entrenched sections to require two-thirds votes in the Parliament but its named specially entrenched parts requiring ultimately approval by the electorate by referendum in which at least three-fifths of the electorate must have voted.

From the records, this is a more accurate version of the making of the Jamaica Constitution.