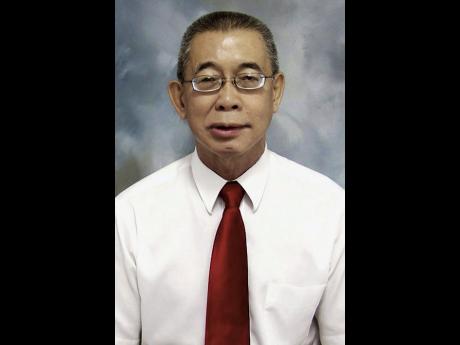 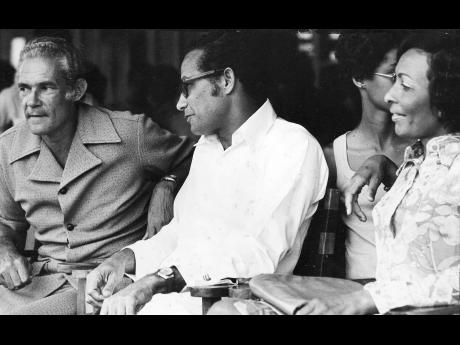 Gleaner photograph
Prime Minister Michael Manley (left) alongside Minister of Public Utilities and Transport Eric Bell and Mrs Bell as they watched action in the doubles of the Brandon Tennis Trophy match at the St Andrew Club on July 18, 1975.
1
2

The 1980 election and the times leading up to it flashed through my mind recently. I worked at ICD's head office downtown on Harbour Street from 1976-80.

Almost weekly, it seemed, downtown Kingston was locked down early because of threats of violence, fear of violence or actual violence itself.

Because of the greatly increased cost of oil, exacerbated by Jamaica's poor balance of payments and depleted stock of foreign exchange, there were almost daily power outages.

They were so frequent that JPS saw the need to regularise these load-shedding operations, actually establishing blocks or areas that would be placed on the carousel of outages.

Virtually every week we would hear of necklace killings in downtown Kingston and particularly in the 'Back To' market area on Spanish Town Road near Portia Simpson Square.

Necklacing is defined by Wikipedia as the practice of summary execution and torture carried out by forcing a rubber tyre, filled with petrol, around a victim's chest and arms, and setting it on fire.

I had a friend who lived on Lothian Avenue in Olympic Gardens at that time.

I used to visit her quite frequently, sometimes late into the evening. This area, part of the West Central St Andrew constituency, saw virtually one-third of the almost 900 killings that occurred during 1980.

Because I am a full Chinese, whenever I used to travel down Henderson Road, there would be chants of 'Yappist'. Whether these shouts were friendly or otherwise, I wasn't able to tell, but if I was to hazard a guess, I would have to say they were of the adversarial variety.

One night, a few weeks before the election, there was a major confrontation. The 'Mallers' or 'Russians' (a reference to Carl 'Russian' Thompson) descended from Mall Road, and crossed the footbridge to Lothian Avenue.

There was a lot of commotion broken occasionally by the hurling of a Molotov cocktail and punctuated by the sound of gunfire coming from the interlopers. This continued throughout the night.

The next morning, my friend moved from her home. I didn't object.

Shortages of basic food items started long before then from the mid-1970s. Rice, flour, sugar, salt, salt fish, corned beef and bread were among those items in scarce or rationed supply.

'Luxury' items which were, I think, actually gazetted, including wines, were banned.

The practice of 'marrying' scarce goods was actually established in this period. This method of 'marketing' was really essential for the survival of the many supermarkets, grocery shops and vendors.

A pound of salt would be married to a quart of syrup or two pounds of rice to a pack of sanitary napkins for example.

It was not uncommon for fights to break out over a pound of flour or rice. In fact, a Chinese shopkeeper on Mountain View Avenue was actually murdered over a pound of salt.

Supermarkets were often lined with empty shelves save for toilet paper, sanitary pads and bottles of syrup scattered haphazardly to give some semblance of a thriving business.

The Private Sector Organization of Jamaica (PSOJ) was formed in 1976 because of the anti-capitalist sentiments prevalent in those days.

I joined ICD on Easter Tuesday 1976 and found myself being asked by Aaron Matalon to represent ICD at some of the earliest gatherings.

Perhaps it is best to quote from the Gleaner of December 13, 2013 titled "PSOJ Honours Its Founders".

Dennis Lalor, a former PSOJ president, quoted from a Gleaner article of the time headlined 'Launch Ceremony for the PSOJ Ends Abruptly', saying that during a slide-show presentation at its launch, some members from the audience of 200 people cheered images of the governing PNP, and later jeered commentary on how the economy was struggling.

The meeting was brought to a quick end to cries of 'Down with capitalism' from some "mainly young" attendees, Lalor said.

Space does not allow me to expand on the news informing the common man at that time, so here are some headlines:

- 844 people murdered - a figure thought to be much higher, in fact.

- October 5 - Manley calls elections for October 30. He had over a year left in his second term.

- 300 workers strike at government owned JPS - 70% of Jamaica in darkness.

Michael Manley and the PNP had swept to power on February 29, 1972. I remembered the mass support he received. Even those who voted against him, I daresay, grudgingly felt that 'Better Must Come'.

I was visiting my girlfriend (soon-to-be first wife), who lived on the NWC compound on Marescaux Road, that night. I vividly recall the hordes of people running down that road to Race Course (Heroes Circle) to attend the victory celebrations.

Later, I recall the almost universal support when Manley introduced the National Housing Trust in 1976.

For whatever reasons, I felt the Jamaican way of life and, by extension, I were under threat. So much so that I had visions of me, who to this day has never held a gun, taking up arms in defending it.

I am convinced that I would have taken up a weapon of some sort if the JLP had lost the 1980 election and things had got much worse with political violence.

As it turned out, I accompanied my friend, a staunch JLP supporter, down to the Belmont Road headquarters that election night to celebrate.

Shortly after Edward Seaga arrived, there was a barrage of gunfire. While everyone, including me, tried to find some form of cover, Joan Webley was pushed under a desk by her bodyguard.

It must have been a harsh reminder to her of just a couple of weeks earlier when her PNP opponent, Roy McGann, lost his life.

As it were, it was some overenthused security guards giving a celebratory blast into the air.