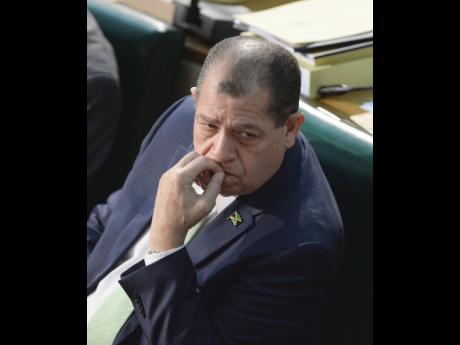 Hush, that sad and mournful cry you heard from a man who is supposed to occupy a post of awesome power, that of minister of finance, actually came from Audley Shaw as he was trying to mimic a mouse bartering with a few huge cats.

Mr Shaw was not really genuflecting before the banks as he tried to trade the lowering of the asset tax rate on financial institutions with the banks lowering the lending rate. But it sure sounded like it.

At present, it is likely that when a man at street level deposits his small change in the bank, he is expected to feel privileged when the bank pays him one per cent per annum interest. If that man and his spouse and maybe a business partner from his community band together and present a viable proposal to one of the banking giants to launch or to expand a small enterprise they have, it would be more surprise than reality if the loan is granted.

If the loan is granted, the partners in that small enterprise may be called on to sign on the dotted line for up to 19 per cent interest per annum, an unconscionable rate of interest. Mr Shaw ought to know that if the bankscontinue to chalk up superprofits by lending mostly to large enterprises, to consumers for car loans (some loans are unsecured), and to those who are prepared to put up their easily sold Kingston 6 houses as collateral, and maintaining a raft of fees, there is rationally no sound reason for them to drift away from that business model.

Mr Shaw is also faced with another embarrassing reality. Whenever election campaigns are on, the big banks are expected to answer the call for donations, even if no one actually dialled their numbers and asked for funds. So, it doesn't have to be spelt out who has the firm handle and who has the sharp blade.

The general idea held by successive Governments, especially administrations run by the JLP, is that it is Big Business expansion and the creating of economic space for small and medium-size enterprises that is the fuel for national growth and development. Even the PNP has been shepherded into the IMF reality of the free market instead of its old belief that an expansion of the welfare state was the ideal.

Where the big banks roll over in their huge mounds of dough, they will allow men like Audley Shaw to make a public call for changes that they know he cannot finesse in private with the big bosses.

It is a fallacy to believe that social factors are not at play when the overall attempts at developing the little man economically are brought out nationally.

Jamaicans are veritable geniuses at devising their ways out of deprivation. If someone does not have an economically viable job, he or she wants to do 'a little business'.

A woman doing hairdressing today may use round-robin to build herself into putting a taxi on the road. Then a few years later, she may open a small wholesale. If she wants to develop a small manufacturing plant at the back of her premises to produce, say, a saleable spice, she is automatically locked out of the banking system, even though she may have had deposits with one of the large banks for the last 30 years.

Because of that economic locking out brought on by social prejudgements, she is forced to go to the microfinance sector, where she still may not be able to get the full loan amount she needs. And so, she remains parked in her social space where she is expected to know her place.

"Big bank nuh business wid we," said an eager go-getter young lady to me recently. "An if wi keep wi round-robin, police waan come an lock it down. Is weh dem waan we do? If mi can't educate an feed my son, him gwine tek up bad company, an is pure problem dat."

A self-made businessman with a social conscience and his ears close to the ground told me last Thursday, "Go downtown Kingston in the nights and you would be surprised at the economic activity taking place there, especially in round-robins. The spin-offs are endless, so it is quite foolish for the police to lock them down. It is a cultural reality in Jamaica, and areas must be zoned for these activities.

"Banks have no use for these people. Remember, the banks are not in the business of spurring social change. They have no time or mission statement to build people out of their economic misery. That is a politician's problem, usually dealt with in unfulfilled promises.

"So if they continue to lend $500 million to large companies for retooling, they feel safe in their exposure instead of lending $100 million to 40 SMEs. And when you think about it, the potential for those SMEs to transform entire communities would do more in the fight against crime than lending just one large company that amount.

"The large business community, the banks, the politicians know what the social consequences and potential are, but the bankers have the big stick, while all the politicians have are promises in their mouths. This country can grow equitably, but only a conscious decision by the big boys in the financial sector can change that. Minister Shaw is only a bit player there."

Having run past the 1,000 mark in murders in August, it is anyone's guess as to where the actual total will reach. At the same time, the Zones of Special Operations (ZOSO) bill has been ready for operational rollout, but behind the scenes, we are forced to assume that a mix of careful planning along with a healthy dose of confusion is taking place.

The most obvious bit of confusion would have to do with which two, or maybe three, communities will be the first to be so designated and made operational. Last Friday, Mount Salem in St James was declared the first ZOSO. Certainly, the planners would have worked out what the likely early-term results will be along with worst-case scenarios.

And the worst case are the obvious ones. A radical upsurge in murders in other communities while, say, two communities are in the zones. I truly sympathise with the planners and those skilled in logistics in these matters.

It is my belief that the JCF has never truly come to grips with criminality since the country had an overpenetration of mobile phones nearly two decades ago. The JCF has never caught up with the digital age. Professor Clayton of the UWI hit all the right notes in his suggestion that the JCF needs to step up its game in approaching crime fighting with 21st-century technology.

The problem is that too many of those in the hierarchy of the JCF know what they need to suppress the crime monster,but they are hindered by their own thought processes, which are still geared towards pre-digital-age crimefighting.

In this modern age, a report made to the police at a station is still carried out by the desk sergeant or constable logging the complaint in a book the size of a toy truck.

The public had, for weeks, been forced into grand guessing games as to when the ZOSO initiative would have begun. I stand with the national security minister and the police commissioner, but I, too, share their confusion.