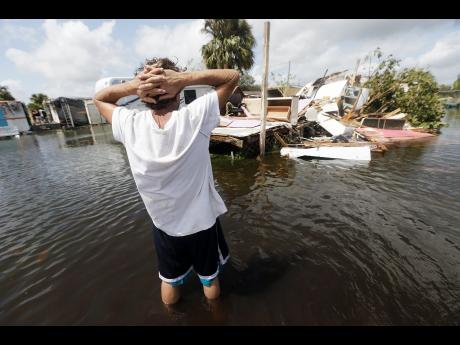 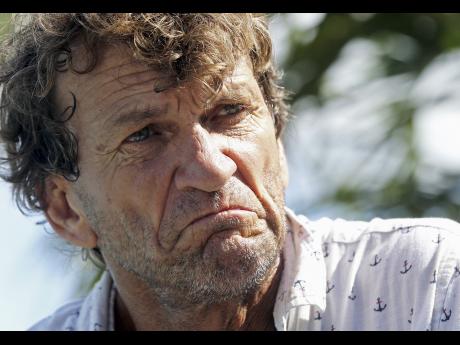 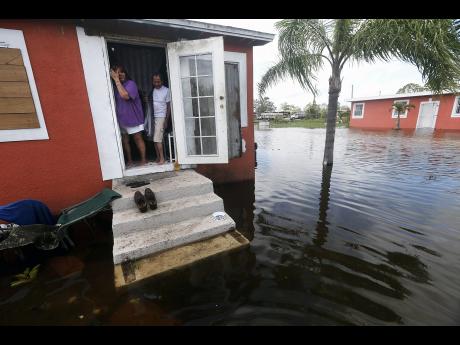 AP
Quintana and Liz Perez look at the flooding outside their home in the aftermath of Hurricane Irma, in Immokalee, Florida, one of the poorest towns in the state, last Monday. Home of many day labourers and migrant workers, Immokalee sustained heavy damage from Irma that will take months to overcome. 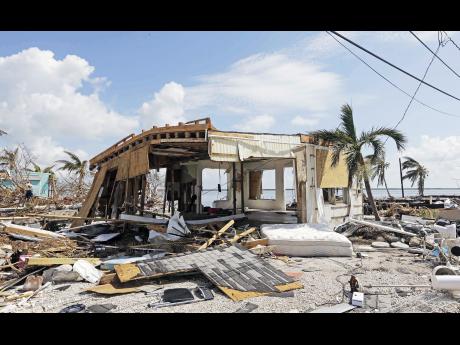 AP
Debris surrounds a destroyed structure in the aftermath of Hurricane Irma, last Wednesday, in Big Pine Key, Forida. Anyone who suffered damage from hurricanes Harvey or Irma will be thankful if they have homeowners or windstorm coverage and flood insurance. 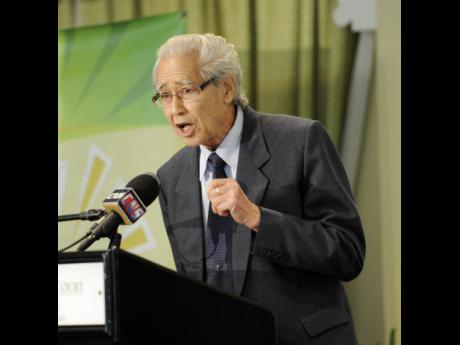 I regard Martin Henry as one of the better commentators in your newspaper. However, in his article 'Hurricanes and climate change' (The Sunday Gleaner, September 10, 2017), he appears to have fallen into a trap set by USA right-wing think tanks sceptical of climate change.

In discussing the work of climate-change denier Dr Judith Curry, Mr Henry states, "A number of courageous and accomplished scientists, who are by no means flat-earthists, have endured the persecution to present alternative views. Considering how much is at stake for the future of humans on the planet, one would think that the sensible thing to do is to allow a variety of views to flourish, which would allow us to pick sense out of nonsense and to challenge orthodoxies in search of the real truth. This used to be the spirit of science."

Mr Henry should realise that the spirit of science is exactly what prevails in confronting Dr Curry and others, as I will explain below.

Let me start by stating a very crucial piece of statistics: 97 per cent of the experts on climate change, the climate-change scientists themselves, agree that humans have been the main cause of climate change since the 1950s. (See, e.g.), Consensus on consensus: a synthesis of consensus estimates on human-caused global warming, by John Cook, et al, in Environmental Research Letters. This consensus is different from another survey that used non-experts such as economic geologists and a self-selected group of those who reject the consensus.)

Consensus is very crucial in the scientific process. The scientific process in the case of climate change works in the following manner. Observed meteorological data and other data called proxy data are analysed to determine if there is a change in climate, i.e., a change in long-term averages. If there is an observable change, other analysis and computer experiments are carried out to detect the cause of climate change.

Humans main cause for change

Consensus is arrived at through peer review of research papers. The fact that 97 per cent of the experts whose papers have been reviewed agree that humans have been the main cause of climate change since 1950 is remarkable, given the chaotic nature of the climate system. The other three per cent who do not agree have either found that their analysis does not detect a human signature or are swayed by other considerations, such as economics (in the pay of fossil fuel companies), instincts, or religious beliefs.

That up to three per cent of scientists may not have found a major human signature in their data is not surprising, given the chaotic nature of climate, and I stressed the 'may' because other considerations could have influenced their decision.

However, the fact that there is 97 per cent consensus that human factor has been a major cause of climate change is more than sufficient for general acceptance, and I will say more about this in the next paragraph. But I want to point out, that in addition, peer reviews of Dr Curry's research and that of other climate-change deniers have pointed out flaws in their conclusions, one of which I will mention at the end of this article for those interested.

Scientific conclusions are accepted when there is a great deal of certainty. For physics systems, such as the behaviour of atom, the certainty required is extremely high. For plants and animals, allowance has to be made for variations, and similarly for the earth system.

In the world of science, we accept the consensus of the majority of biological scientists, so similarly, we should accept the 97 per cent majority consensus on climate change and not allow a "variety of views to flourish". I said that Mr Henry has fallen into a trap set by right-wing climate-change deniers because this is the strategy they pursue. They wish us to give equal time to the sceptics as to the majority of scientists.

Mr Henry has also quite rightly said that "over the long haul, the planet has seen many big-climate swings, several in recorded history". But implying that the present change is just such a swing is neglecting what the data are showing us. Proxy and instrument data show that temperatures have never been as high over the last two millennia as it currently is, so this is not a swing; it is an outlier.

Dr Curry and other climate-change deniers have said that their data show a pause or 'hiatus' in warming since 1998. The data set they use is derived from satellite data, from which they determine lower atmospheric temperature. They skip ocean temperatures (which accounts for more than 90 per cent of the warming), measurement at the surface of the earth using instrumentation (thermometers) and ice loss, which requires warming.

Others who use a more complete data set see a continued warming. For example, Iselin Medhaug, et al, in the leading journal, Nature, in May 2017 showed that "apparently contradictory conclusions stem from different definitions of 'hiatus' and from different datasets. A combination of changes in forcing, uptake of heat by the oceans, natural variability and incomplete observational coverage reconciles models and data. Combined with stronger recent warming trends in newer datasets, we are now more confident than ever that human influence is dominant in long-term warming."

And to top it all, Carl A. Mears and Frank J. Wentz, in Journal of Climate in June 2017, using the same satellite data as the sceptics, but correcting a problem with satellite data, viz, drift in altitude and their orbital horizontal drift, show that there was "more warming than most similar data sets constructed from satellites or radiosonde data". In other words, even satellite data showed that there was no hiatus, agreeing with other methods of determining temperatures.

Locally, the Climate Studies Group at Mona found that there is a warming trend from 1992 to 2012, certainly no hiatus in Jamaica. The moral of the story is that science is objective and calculating; it gives equal time to both sides of a debate if they have equal weighting, but in the end, it aims for consensus, which is achieved by experimental and analytic agreement.

n Professor A. Anthony Chen is an astrophysicist and Nobel Prize winner. Email feedback to columns@gleanerjm.com and achen@flowja.com.