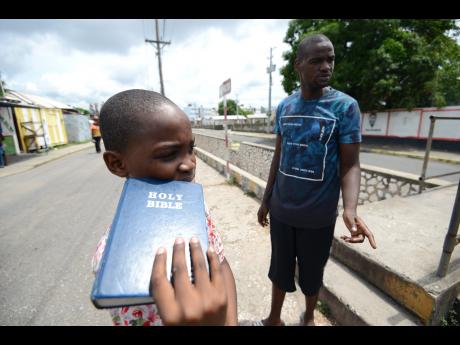 Ricardo Makyn
Tremayne Brown, the hero of Trench Town, talks to journalists about his September 8 rescue of Renaldo Reynolds from a flooded gully along Collie Smith Drive olast week. The video of the dramatic rescue has gone viral over the last week.

Two Fridays ago when 24-year-old Tremayne Brown saw a young child being washed away by the raging floodwaters rushing along in the Collie Smith Drive gully, not a moment was spared in him jumping into the unknown dangers of the quickly moving run-off.

He may have told the nation what it was that spurred his action, but can we ever truly determine what it is that separates him from the majority of us? Most of us are basically rational, especially where it relates to our own preservation and the protection of our lives from imminent danger.

It's a rainy period, and the excess water from the hills is rushing along in the gully and a little child is being washed away. We are immediately filled with compassion for the child and our first response is to shout out in dismay or cry for help. Even if one is a swimmer, the water is high enough and is in its last wild rush to the sea to make it impossible to swim through.

We opt for our own preservation and the hope that we will live to see many more days. We have high hopes for the child, but we know the likelihood of his life being spared is close to zero.

We now know that Tremayne opted for quite the opposite and jumped in to save the young boy. We also know that after the raging waters had taken them hundreds of yards towards the sea, Tremayne miraculously saw an overhanging branch and reached out for it. When others eventually reached him to save his own life, he was barely hanging on, with the youngster clutching tightly to his back.

The many cuts and bruises on his body, along with the sore muscles and sinews, paint a picture of a young Tremayne who became a hero that day. He performed the ultimate human act of saving a life while exposing his own to potential death.

Leaving Jamaica at six years old and being a recent deportee (six months ago), Tremayne is basically British, having lived in England for 18 years.

A step-relative abroad told me last week, "There is no doubt that we could have done better with him. Earlier on, there was some fragmentation, and it probably affected him. He didn't finish high school and for a time he found himself associated with the wrong crowd.

"He wasn't into any hardcore stuff, but he was basically adrift. I believe he was deported more for what his associates did than for any direct criminality on his part. In any case, he had no good defence and his life was going nowhere."

This act must now redeem Tremayne

A few residents of Arnett Gardens, through which the gully runs, have made the claim that they deserve recognition, even if not at the level that the nation has been celebrating Tremayne.

In truth, they were the ones who made the final rescue of Tremayne and the trembling child. They ought to be recognised. What also needs to be stated is that if Tremayne had not made that split-second decision to 'chuck' himself into the raging waters, the child would likely have died and there would be no need for a final rescue of the primary hero and the life he saved.

So, some perspective is needed. The men who also made that dangerous decision to jump off into the fast-flowing flood waters are themselves heroes, but it is not a simple matter to place categories of bravery in this widely followed national matter.

If, however, there is a leading character in this very real story of a modern-day hero, it is Tremayne Brown.

I can well understand that after the ever-present LASCO stepped in to offer him a job and other corporate bodies showered him with gifts, it has forced on those other players on the same team to explain that the final play was mostly because of their own heroic moves.

Jamaica is basically starved for good news that moves the meter on every section of society. This recent action looms larger than another Jamaican bank reporting mind-numbing profits while the rest of us can't quite figure why there is this yawning gap between the performance of those at the top and the dwindling resources being fought for by those at the very base.

In Tremayne saving that child's life, it touched Jamaica in quite a different way than, say, Bolt and company giving us honour on the international stage.

The heroic act of Tremayne was something we wanted to see in ourselves, even as we basked in the glory that redemption gave to the young man. He was ours, from a much vilified part of society that is often thought to be the cradle of criminality. And yet his special light came shining through.

"I don't want them to give him a pile of money. I would much prefer for him to have a steady job and further training in something that fits him," said the step-relative. "If he is to get cash, it would be useful for it to be placed in the form of a trust with conditions applied. A job is the first priority.

"I know that he is also spending time outside the community. I would like to encourage that, as he will be able to make more contacts, as there are still people who fear going to Arnett Gardens."

When I called Tremayne's cell number on Thursday, it was his father who answered. "Tremayne on two interview now." We spoke about other matters, and he suggested I call back.

A nation celebrates him and it gives us pause to reflect on our social prejudices.

The real tangibles in ZOSO

For more than a few weeks now, I have been trying to determine from those in charge exactly what would be in the specifics of the social intervention side of the zones of special operations. I did not have much luck.

Based on what has been reported was delivered in the Mt Salem community two weekends ago - 258 birth certificates, 72 TRNs, 41 NIS certificates, 237 people seen by a doctor, 470 got dental treatment, 156 saw the optician, 46 food handler's permits issued, 55 registered with PATH, 43 with HEART, 17 registered for apprentice training, 13 got job placement at call centres, 11 registered under HOPE, 76 families benefited from back-to-school supplies to include khaki, bags, books and pencils, I now know.

We do not know what percentage of these basic social needs were satisfied, but, as a start, this looks quite impressive. What it tells us is that details of the social intervention needs list could not be compiled because the actual needs were not known.

The more problematic fix will be in the findings, which are nothing new, in that broken families are a feature of the community. That can only be fixed over at least two generations.

I am positive that the Government is getting funding buy-in from the big private-sector operators in the area in regard to part-funding for the continuation of the social deliverables. I say this because as the ZOSO moves into other communities, I can see a day when the kitty is going to be simply empty.

But it ought to be a win-win for all. A better social order involving more people being lawfully hooked up to the main utilities, a healthier community, more children going to school on a regular basis, the spurring of additional business opportunities at a very basic level, and an atmosphere unpleasant for criminals, as more people gain trust in the security forces.

The long haul is ahead.

- Mark Wignall is a public-affairs and political commentator. Email feedback to columns@gleanerjm.com and observemark@gmail.com.