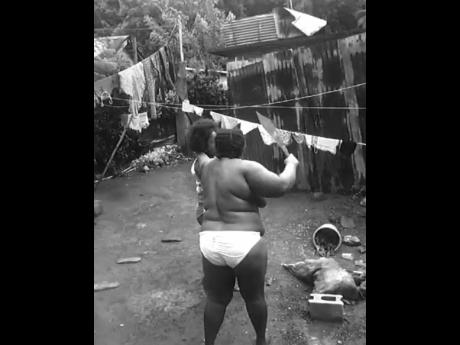 Contributed
In this video grab, 44-year-old Doreen Dyer beats her daughter with a machete in the community of Bath, St Thomas, in November 2016.

A mother used a coconut machete, commonly called a bill, to beat her teenage child with so much rage that it brought to mind the evils that we experienced when we were on the plantation. Most pathetically, it was not only the busha man and white overseers who beat us until we soft like porridge. Rather, the very same slave drivers, African slaves themselves; would take out their frustrations on their peers. It is a long and deep history that we have of 'murderation' and we express it on the most vulnerable.

In the video, which has made more rounds than an alcoholic in a rum factory, the only things that stood out was the fact that the mother was dressed to play bingo and that she used the only other weapon that I fear. The other, of course, is a lying tongue.

Remove the cutlass and put a frock on the mother and you get a scene so ordinary that one could scarce bat an eyelid. Indeed, the one amazing thing is how come she could have wielded a machete, which looks like it was sharpened, beat the child with it and not severely cut her. Such manual dexterity, evidenced as she, with a flick of the wrist, slapped an innocent Rex, who yelped, "Arawak!" must be due to her also being a coconut vendor.

However, to be brutally honest, I was holding my breath because I feared that within the salvo of blows would have been one that slipped, and the child would have lost a limb. Thankfully, she did not receive any major injury, but I am sure that she is severely traumatised by the exposure among hundreds of thousands of tongue-wagging Jamaicans, including many who beat their own children much worse.

Most Jamaicans can empathise with an almost sadistic mother, naturally schooled in the martial arts, who wields a worn-out belt like a nunchaku. Like a Jet Black Li or Blacky Chan, she tosses objects, which always seem to hit the target, despite the dandy-shandy or baseball skills we develop. Not even the agility we gain from the Jamaican version of 'tag', which we call 'stucky', helps us to escape.

It is difficult to imagine what satisfaction a mother can gain from slowly torturing her child. First of all, she sends her for the weapon of mass destruction, with the 'M' silent. We all can remember her sending us for the belt. Of course, I, being a smartass, would go for the cloth belt that formed part of my sisters' uniform rather than my father's retired leather belt, which even horses and donkey cringed under its wrath.

Not to be outdone, she would use her initiative and beat the middle part of that word out of me using the buckle. And my beatings were moderate compared to many other children's. Other mothers would typically send the child to perform the daunting task of selecting a whip, which had to be the right size.

What is sad is that survivors of this parental torture make silly anecdotal statements about how beatings did them well, and they kept them from turning bad. Using a perverse version of the Bible's 'spare the rod and spoil the child', many of the advocates of corporal punishment would be surprised that the phrase is not exactly biblical. In fact, Proverbs 13:24 states: "He that spareth his rod hateth his son: but he that loveth him chasteneth him betimes."

Of course, it is the same Bible that prescribes death for unruly children. Yes, death, hence, murderation. Deuteronomy 21:18-21 reads: "If a man has a stubborn and rebellious son, which will not obey the voice of his father, or the voice of his mother, and that, when they have chastened him, will not hearken unto them: ... all the men of his city shall stone him with stones, that he die: so shalt thou put evil away from among you ... ." Therefore, in fact, there is a biblical foundation for the warped sense of discipline. So for those who love to extol the relevance of the Old Testament, then I could simply suggest that children, "who are out of control," including some of the 5,000 in places of safety and other institutions, just kill them and end it.

On the contrary, even without the benefit of scholarship from social workers, psychologists, and sociologists which points to the negative effects of corporal punishment; what about taking the place of your neighbour as Christ taught, in this case the child? How many strikes of the strap must a child get in order to receive the message?

If one goes back into one's memory, I am sure that after the first stroke from the cane, the errant child, writhing like a species of hookworm, quickly understands the folly of his or her ways. The problem is, the beaters do so not because of the need to correct behaviour, but to express their frustration, usually based on factors outside of the scope of responsibility of the child. These may be the indecent working conditions, poverty, or 'the wutliss puppa' who left her with four hungry children.

Many of the beaters are victims themselves who actually love their children but are overwhelmed. Moreover, oftentimes ushered into parenthood before they are ready, they simply lack parenting skills. Thus, inasmuch as the torture of children is a breach of the Child Care and Protection Act, we need to have deeper social interventions and seek to improve parenting. It is a vicious cycle.

Research across the behavioural sciences shows a direct link between parental abuse and subsequent abusive. Indeed, criminal behaviour of the next generation. Dr Herbert Gayle, in studying more than a hundred young men, has cutting-edge research that demonstrates that maternal abuse and torture is a causal factor in a study of why they became murderers. We have a lot of work to do, and as long as we beat our children mercilessly, the success in the zones of special operations (ZOSO) will not even be 'so-so'!