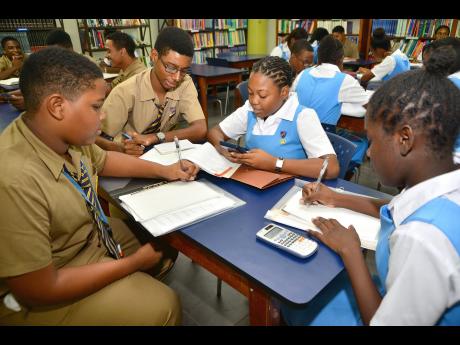 Patrick Planter
A group of students from Ardenne High completing class work in the library at the school.

In about a month's time, thousands of grade 11 students all over Jamaica will be sitting the annual Caribbean Secondary Education Certificate (CSEC) examinations. Looking at the invaluable data from the 2017 high schools ranking (based on the 2016 exam results) and published annually by Educate Jamaica (The Gleaner, Tuesday, May 2, 2017), we wish the students the very best even as we (and their parents) wait in trepidation. Unlike the immense hype surrounding the Grade Six Achievement Test (GSAT), CSEC events often pass unnoticed - until the results are published. Then we see what a dismal state our high school system is in.

The 2017 rankings showed that of 161 high schools across the country, only 46 schools were able to have 50 per cent and over pass levels in at least five subjects, including English and math. After 11 years of education, the vast majority of students are being turned out on the labour market with little or no qualifications.

We know that CSEC certification is not the sole criterion on which to evaluate a high school. But we still can't disregard glaring academic failures. The implications are dire: a lifetime of hardship and disappointment; a mass of alienated young people who, however, have some incomplete high school education; an economy able to generate only low-paying jobs, if any at all. There are specific implications for crime. The most likely perpetrators of violent crimes are males in the 20-29 age group who have never been employed and have had some high school education but no formal certification. Hustling, legal and illegal, becomes their destiny - and our nemesis.

Criticisms have been made of the data on two grounds: First, that the high-performing schools are where they are because they are getting the crËme of the GSAT crop. This may help to explain the extremes but not the dreadful middle ground - occupied by about 60 schools whose pass rate ranges from 49 per cent to 11 per cent. The second objection is that the top schools are practising intensive pre-selection, with their weaker students not getting a chance to sit CSEC. But the cohort numbers provided by Educate Jamaica are quite large for high-performing schools: Ardenne (92 per cent pass rate, ranked 14th) had a cohort size of 317; whereas Munro (88 per cent pass rate, ranked 21st) had a 146 cohort size. No doubt some filtering takes place but not sufficient to significantly affect the general thrust of the data.

There are no surprises when we compare girls' with boys' schools. Ten all-girls' schools had an over 90 per cent pass rate. But Wolmer's Boys' (94 per cent) was the only all-boys' school with a pass rate of over 90 per cent. However, despite this, Wolmer's Boys' was barely in the top-10 performing schools although it has jumped from a 14 ranking in 2016 to 10 in 2017. In other words, our very best-performing all-boys' school is exceeded in performance by seven all girls schools and two co-ed schools (Campion and Mannings). Of the top-seven boys' schools, only four (Wolmer's, Munro, KC, St George's) had a pass rate of 80 per cent and above, with the other three ranging from JC (64 per cent), to Calabar (54 per cent), and Cornwall (53 per cent).

There is no simple equation between 'high-performing' and 'traditional' high school. For example, Morant Bay High (84 per cent, ranked 26, and rising) is right behind KC (87 per cent, ranked 22nd) and ahead of St George's (80 per cent, ranked 27th). Calabar is below Mona High, ranked 44th with a 59 per cent pass rate. Overall, the performance of many of our rural high schools (St Hilda's, Hampton, Westwood, Knox, Mannings, and Glenmuir, to name some) is outstanding. There is immense variation in the same parish: Mannings is near the top while Grange Hill High is near the bottom.

A main thrust of Government's employment policy is business process outsourcing (BPO), so the performance of our technical high schools is particularly important. The results remain disappointing. No technical high school ranked in the top 20, and only two (Herbert Morrison and St Elizabeth Technical) ranked in the top 45. Schools of renown such as Kingston Technical are nowhere to be seen - I couldn't find their 2017 ranking, but in 2014, Kingston Technical and Vere Technical were ranked 90 and 91, respectively, with a 13 per cent pass rate. St Andrew Technical was almost off the charts in 2013 at 115 with a pass rate of 9 per cent! Perhaps the students are doing well at other exams.

An equally interesting question is the performance of our well-known 'athletics' schools, whose names ring in our ears at Champs and Manning Cup. It's worth noting that not a single one of them is in the top 20: KC (22) is the only one doing fairly well but with much room for improvement. After all the many millions spent by old boys, all Jamaica College can muster is a measly 64 per cent pass rate and a ranking of 39. The great Calabar languishes at rank 45 with a 54 per cent pass rate. What say ye, outstanding old boys?

The key question, of course, is what can be done. One of the very first concerns is the need for more public focus on high school education. The level of hype (and corporate sponsorship) around Champs and Manning Cup should be matched by an equal hype around CSEC. A sustained media campaign is a necessity. We also need more detailed research. For example, there is some evidence that there is actually a post-GSAT relapse, in grade 10 in particular, whereby in some schools, the student's educational performance actually declines. In other words, far from adding value, some high schools may be subtractors! A system of material rewards for students and schools doing well academically (comparable to the athletic rewards) needs to be instituted. The leaders of successful schools and some key figures in the economy, plus Jamaica Teachers' Association representatives, need to be constituted as an islandwide board for the high school system as a whole, with an executive chair with real power to enforce changes. Other, more brutal, measures may well be necessary at a higher level, but that's a matter above my pay grade.

- Don Robotham is professor of Anthropology and director of the Advanced Research Collaborative, the Graduate Center of the City University of New York.