Gordon Robinson | The Gospel according to Gordon 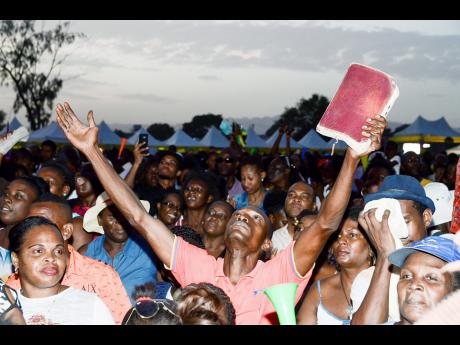 Shorn Hector
An exultant man praises the Lord at the gospel festival, Fun in the Son 2018. Church members and leaders are complicit in a misrepresentation of God, writes Gordon Robinson.

Sometimes, when I read or listen to dangerous dogma promulgated by the Church and its many brainwashed surrogates, I can only shake my head.

It's not surrogates' fault. They've been trained, in our mainly inadequate secondary schools supplemented by one of our dreadfully disturbing organisations of advanced instruction (Church) infiltrating Jamaican society with a mission to develop and train sycophants, to avoid the use of two organs of the body without religious permission. One is the brain. A domi(no) prize to any reader who can guess the second one.

But the most egregious bit of perverse propaganda spread by Christian churches is to do with God's identity. Who/what is God? The Church insists:

First and foremost, God is male. He'd have to be, you see, because no female person (oops, sorry, 'God') would ever inspire anybody to quote Her as instructing: "Let your women keep silence in the churches: for it is not permitted unto them to speak; but they are commanded to be submissive, as also says the law."

If I ever wrote THAT, I'd be accused of being a self-serving, sexist, bigoted woman hater. But because Paul, an unmarried believer in Jesus Christ, alleged that he was told to publish this arrant nonsense by Jesus himself, women voluntarily submit to religious cages and hail him as a prophet. This allegation would be held to be a lie in any court. It's egregious hearsay, and Jesus' actual conduct proved that He trusted women over men every time the chips were down. Which woman ever betrayed Jesus?

God looks like an old, white man with a flowing beard. He narcissistically created the world to have a worshipful congregation who should always act out of fear of Him.

God is a vengeful, petty, jealous old man who would have us sacrifice our own sons to prove allegiance; instructed His only begotten son to commit suicide by judge; destroys individuals and nations that don't obey; murdered all living things (created by Him) save for a chosen few; and WILL condemn Muslims, Jews, Hindus, Buddhists, Rastas, and disobedient Christians to eternal damnation and immolation for not surrendering to His Word as conveyed to us by the Church. Oh, yes, almost forgot, He gave us all free will. DWL!

There's more, but The Gleaner will start rabbiting on regarding word count (something some pastors could consider), so I'll presume you get the message. Either the Church has NO CLUE about who/what God really is, or it deliberately misrepresents God's essence in order to frighten people into becoming church members and tithing. Nothing else makes sense.

Approximately 35 years ago, I had a fascinating conversation with my friend Warrington 'Flash' Williams, which he's certain to have forgotten. I haven't. Warrington is one of the best commercial/conveyancing lawyers in Jamaica (and, BTW, an avid reader, so nyaaaaaaah!) but unless you've engaged his services, you've probably never heard the name. Spiritual lesson: The best of the best are generally quiet, reclusive, and not at all famous (look it up in the dictionary under Walter 'Blubba' Campbell).

The best of the best hate the spotlight. Persistent self-promoters usually need the promotion. I once mentioned the great Ken Vaughn (there, I've done it again), Jamaica's foremost orthopaedic surgeon (my opinion), to thank him for the excellent work he did on my ankle, which was shattered by The Old Ball and Chain (my story and I'm sticking to it). He was livid. He said to me, as best I can remember as I'm at that age when, like Richie Beckett (look him up), I forget things: "Like you, I don't enjoy publicity."

Among the gems of wisdom from that long-ago convo, Flash advised me: "You don't have to like your partners to form a good partnership." The point he was making was that too much of the same wasn't necessarily productive. Diversity together was the way and the light.

So, get this. God is within us. We are within God. God is the collective energy of all 'living' things. We're all partners in this divine strategy to experience relativity rather than only absolute knowledge. For any God (or person) to be complete, knowledge isn't enough. For example, after university, we might believe we know all. Maybe we even think we see all.

But we can only know and see what we've already experienced. Until we experience 'reality', until we learn the true meaning of relativity, all we 'know' is knowledge. So, law-school graduates know what they learned in lecture rooms and textbooks. None will be able to tell you, for example, that their worst enemy in real-life practice is their own client who, with a few spiritually advanced exceptions (of which I've met at least three), know more than you and always know just how much you need to know.

Law-school graduates experience this reality the first time they sit and listen to a withering cross-examination of the client by opposing counsel who has researched the facts and destroys the genius client with an expert combination of truth and guile. THAT's when you begin to grasp that it's not enough for God to be all-knowing and all-seeing. God must also EXPERIENCE. God isn't stupid. He/She is at least as bright as you.

So He/She (just an all-knowing existence, call it the universe) creates a big bang; produces galaxies; inhabits planets in different ways; uses a matrix that only those achieving heightened wisdom can figure out and then proceeds to experience relative existence through these inhabitants. Earth's inhabitants are given free will to ensure God experiences ALL there is to experience, including religious bigotry. So, don't worry, church leaders and churchgoers, you ARE doing God's work. But so are we.

We're all little pieces of God, adding experience of relativity to God's all-encompassing knowledge. We're all little creators capable of anything our minds can conceive. This is why we'll always find God in solitude deep within us. My God is a man. The Old Ball and Chain's God is a woman. Our divine Mother/Father doesn't discriminate, judge, or punish. WE do that. Why? That's because the urge to be judgemental and to punish is an experience as important to fulfilling our divine task of becoming Who We Really Are as any.

If some of us didn't feel the need to be superior and judgemental, we wouldn't experience the contrast with others who don't. Experience needs relativity. Understanding the spiritual necessity of diversity is our true rite of passage.

Until I'm one with you, my heart shall not pass through.

We waste so much time on this mundane journey proving how greater we are than our neighbour by knowing more, looking better, working harder, or being awarded higher 'honours'. Give yourself a break! Get a real life! It's all an illusion. That beautifully sculpted body you think you see sitting right next to your fat, unhealthy-looking, ugly self is actually exactly the same as you. Strip away the facade and you're both just bundles of energy, once little pieces of 'God', sent here to experience relativity. That bundle of energy (let's call it a 'soul') returns to God at journey's end, carrying with it all its worldly experiences to complete God and to be who it really is.

Until I'm one with you our love will be mistaken

Ryan Bingham is a singer-songwriter of Americana, which I prefer to call alternative country. His brilliant, deeply philosophical lyrics and haunting music have earned him critical acclaim and Academy, Golden Globe, and Critics' Choice Awards (2010) for co-writing the theme of the movie Crazy Heart. His Until I'm One with You was the theme of a magnificent crime drama on FX named The Bridge (inexplicably cancelled after only two seasons). To me, it speaks of the spiritual oneness with each other and God necessary for true achievement in this world and smooth passage to the next.

If we understood this eternal truth and committed to it, we'd eliminate all strife, including racism and tribalism. But we won't. Why? Because that's the way God planned it. It's all experience. It's all education. It Saul Goodman (Romans 8:28)

Don't believe me? Visit any cemetery. This you'll discover at every grave: The occupants - black, white, red, pink, yellow or brown; fat or thin; ugly or beautiful; tall or short; rich or poor; VIP or vagrant - are all the same now.