Gordon Robinson | Why Booklist stood out 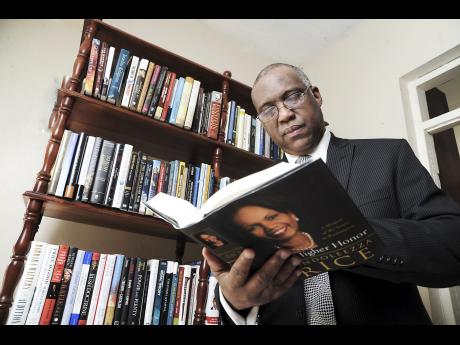 Ricardo Makyn
File Ian Boyne does a photo op poring over Condoleezza Rice's memoir, 'No Higher Honour'. 'Booklist', as Gordon Robinson needled him, took no greater pleasure than reading from cover to cover.

I've deliberately waited almost a year after his untimely passing to pay my full (NOT 'fulsome') personal tribute to deceased icon, Ian Boyne.

It's my hope that the time has allowed some to reflect on the big picture called life. Those with eyes to see (and read) and minds capable of clear thought should find it a simple task to appreciate how I could've been so critical of some of his writings while he was alive, yet, upon his death, issued the following brief statement:

"The passing of a giant in any field is always sad, but the passing of Ian Boyne at this time of year is devastating not only to his family and friends but to all Jamaica. Just when we thought he was past the worst, we must deal with the knowledge that he's gone. Everybody knows I had lots of fun at his expense in my columns, having created 'Booklist Boyne' as one of my many literary characters, but nobody should mistake that character for the real person who was as different from Booklist as is Karen from the Old Ball and Chain.

"Ian Boyne was an extraordinary journalist who transformed the profession with the breadth and depth of his research and his incredible versatility. From his newspaper columns through the perennial TV production 'Profile', and his latest creation, 'Religious Hardtalk', Ian was a painstaking perfectionist who ensured he knew more about his subject than the subject itself, himself or herself.

"Many people will not know that his interest and expertise also extended to the history of Jamaican popular music, in which he was very well versed. I recall seeing him in the good old days at several Heineken Startime concerts enjoying himself along with the rest of the audience like any 'hipster'.

"Ian Boyne, journalist, producer, presenter, author and philosopher extraordinaire, rest in peace. You will be missed. You will be remembered."

Hmmmmmmm. On reflection, maybe not so brief!

I'm a selective reader these days, but I'm told this attracted many wasted column inches of condemnation. The word 'hypocrisy' might've been used. I wouldn't know for sure.

Yawn. The Bible does exhort us to put aside childish things when we become adults, but many just can't let go. In Jamaica, I find a majority take argument altogether too personally to the extent that, although we're experts at talking, we don't do well listening. While others talk, we're thinking about what we're going to say next.

To begin with, disagreement on issues, attitudes or styles, however strongly expressed, isn't the same as vilification of one protagonist by the other. Persons, while alive, are subject to scrutiny and critique, no matter their identity, status or occupation. Public personalities must endure this in public. While alive!

But, in speaking of the dead, the living ought to take a step back; look at the deceased's life as a whole; and comment if it's felt that life had a positive overall effect. My sainted mother taught me that if you can't find anything positive to say in that situation, shut up. With two notable exceptions, one a public persona, I've always obeyed her instruction.

In Ian's case, obedience was easy. His contribution to lifting media professionalism in Jamaica from the tribal 'cass-cass' he found to the serious analysis more evident when he left is indelible.

Yes, his style differed from mine. Yes, he insisted on 'balance' to the point of sometimes appearing to be trying to simultaneously occupy both ends of a see-saw. Yes, I recorded my disagreement with these 'shortcomings' (as I saw them) bluntly (that's MY style) often satirically. Even my nickname for him ('Booklist') was a humorous way of lampooning his proclivity to quote from erudite tomes. So what? He wasn't the only public figure to earn a nickname from me. I guarantee there'll be many more.

I don't waste time critiquing persons I consider irrelevant or foolish. If I see you as an agenda-driven, puerile, dense or otherwise ineffective communicator, I ignore you. Ian couldn't be ignored. His erudition, experience and impact were undeniable. Where I thought he went astray, my duty to my readers (both of them) was to make that clear. So I did.

Ian had a different yet similar standard. He steadfastly declined to respond to 'uncivil' critique, but those who could read between the lines easily identified his responses, however well disguised as general comment.

So, I've convinced myself (perhaps foolishly) that I had an impact on Ian's thinking. He certainly had an impact on mine. I was overjoyed to see his attitude to the State's intrusions into sexual orientation, originally so religiously rigid, become more tolerant as he drew closer to eternal truth.

"I detest how the gay lobby has manipulated language to classify any opposition to homosexuality as 'homophobia'. That's absolute nonsense. There are rational, sophisticated people who believe homosexuality is morally wrong and philosophically and theologically unjustifiable. (As much as arrogant gays find that hard to believe). I believe that if the Bible is read as authoritative ... , you cannot come away with any justification whatsoever for homosexual conduct."

All homophobic buzzwords were used. There's a gay 'lobby'. Gays who don't agree homosexuality is morally wrong/philosophically unjustifiable are 'arrogant'. Holders of the opposite view are "rational"/"sophisticated". The straw man who classified "any opposition to homosexuality as homophobia" was carefully constructed and efficiently destroyed. Despite the cautiously crafted caveat, "if the Bible is read as authoritative", Ian obviously felt "homosexual conduct" couldn't be justified.

I've repeatedly disagreed with him on this issue, often harshly so. Does this mean I'm unable to recognise and acknowledge his overarching sincerity as a commentator and his significant contribution to Jamaican political and philosophical discussion? Puh-leeze!

Maybe he read my critique. Maybe not. Maybe inspiration came from personal association or within. Who knows? Regardless, on July 30, 2017, Ian wrote in a column headlined 'What's really bugging the Church':

"The incendiary controversy over Jamaica's buggery law is political, not moral or practical. No biblically defensible argument can be advanced against repealing it ... ."

What the Devil? Who wrote this? What've you done with my Ian? But he wasn't Dunn. He went on:

"The discussion on the repeal of the buggery law is characterised by appallingly sloppy thinking, non-sequitur reasoning, fear, bigotry, and prejudice ... ."

If Christians hope to be respected ... , they must at least exhibit some modicum of respect for logical reasoning. There has been very little of that from Christians in this debate."

So, Ian closed his career with unambiguous support for repeal of buggery laws based on the differing responsibilities of Church (to promote 'morals' based on scripture) and State (to legislate according to public policy rather than theocracy). He debunked Christian fear tactics that suggested repeal would encourage a homosexual explosion, opining that repeal of the buggery law would have no effect on human behaviour. In this way, he maintained his stance against homosexuality (which he still called 'behaviour' when it's an unavoidable orientation) on moral grounds but stoutly defended homosexuals against state incursion into their private lives.

"The buggery law is unjust and unbiblical ... ."

He slammed Christians for stigmatising homosexuality using inane 'health' reasons not found in scripture as a refuge for illogic:

"The case is made about the health risks of male homosexuality. But in scripture, the prohibition against homosexuality is cast in moral and theological terms, not ... health. I've no doubt homosexuality is explicitly condemned in the Bible. But the argument of Christian anti-gay activists, which focuses on health hazards, isn't representative of biblical perspective."