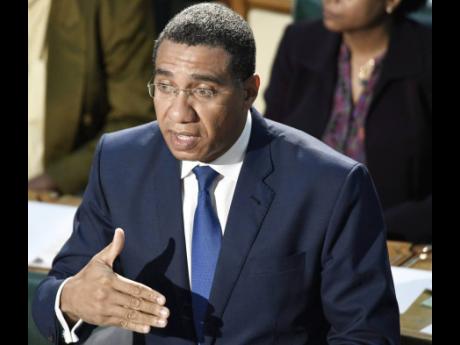 Braps! No coddling, no reviews, no hesitation. Some guys, like Topsy Turvy, had better luck. Remember the PM’s “preliminary” statement to Parliament on Petrojam (June 26, 2018) about Topsy Turvy?

“On Monday, June 25th, I received a preliminary report on the operations of Petrojam and on specific allegations in the public domain.”

Now where have I heard those words ( “allegations in the public domain”)? March 20, 2019? While addressing Parliament regarding Mumble Bumble?

Things that make you go hmmmmmm … .

“The meeting, which ended at approximately 11:00 p.m., gave Cabinet the opportunity to question the general manager and management of Petrojam as well as officials of the ministry.

“Pursuant to exhaustive discussions, Cabinet gained a better understanding of the issues and problems at Petrojam and identified key areas of weaknesses in [Petrojam’s] governance. The weaknesses identified appear to be longstanding and systemic in nature and have impacted the governance, transparency, and efficient running of the entity.

Some of the issues raised in the discussion highlighted governance and management practices that require a policy response that will improve governance not only at Petrojam, but also across all public bodies.”

Sweet. Nobody was fired (yet), but the incident was to be used to improve governance “across all public bodies”. Did that include those at the education ministry?

Topsy Turvy continued to sit in Cabinet and oversee the ministry of Special Treatment, Endowments and Mismanagement (STEM).

“Cabinet today continued its consideration of a report it received last week on Petrojam, and, having regard to investigations already under way, decided the following:

1. Residential status of all persons nominated to boards must be stated in the Cabinet submission seeking approval for appointment.

3. Public bodies will be prohibited from entering into sole source retainer contracts without the prior approval of Cabinet.”

So this policy was decided and implemented before July 2, 2018!

4. The Ministry of Finance has been tasked to develop and finalise uniformed regulations for public bodies around donations and corporate social responsibility… . This would see limits on the amount that can be approved at agency level. It will be a requirement that all donations be disclosed, with details to include … the purpose of the donation and connected party consideration with management, board of directors, or minister.”

Online Gleaner reported (March 20) that it was told that “officials are preparing to return the ministry’s $20 million donation that was made to Jamaica College for its athletic track, which was fully funded by one Jamaica College old boy.” What was “fully funded”? The donation? Or the refund?

5. After discussion with Minister Wheatley, it was agreed that Petrojam requires strategic review of its management and operations, as well as its long-term commercial viability … . Having regard to this and the ongoing investigation, Minister Wheatley agreed with the prime minister that in the interest of transparency, the energy portfolio will be transferred to OPM … .”

Finally, upon the “agreed transfer”, we were told what the problem was. Non-residents appointed to boards without Cabinet’s knowledge; chairmen undertaking overseas travel unknown to ministers; “sole source retainer contracts” (fancy words for facilitating political nepotism) unknown to Cabinet; public funds used to make questionable “donations”; and an “ongoing investigation”.

STILL, nobody was fired.

PM sat down, in the spirit of Cabinet camaraderie, with Topsy Turvy and jointly decided how to improve governance at agencies that wallowed in corruption under Topsy Turvy’s watch. Topsy Turvy was an active co-designer of the path forward for an awful institution where he previously insisted he saw nothing wrong.

Sigh. Never mind. I suppose the national end sometimes justifies the political means, so let that pass. For now.

“After reviewing the [permanent secretary’s] report and interviewing [Petrojam’s] senior management, Cabinet arrived at several conclusions and made certain decisions.

The need to strengthen the oversight powers and governance control of public bodies.

… I’ve given directions for the Minister of Finance to bring to Cabinet proposals for amendments to the Public Bodies Management and Accountability Act to bring clarity to the current accountability architecture.”

What amendments are being drafted? Where are we with them? Did Mumble Bumble know?

“It was clear from interviewing the acting permanent secretary and the officers of the energy division that the central ministry wasn’t aware, or was made aware after the fact, of most of the instances of maladministration.”

Ok, I get you. The Permanent Secretary efficiently practiced the vital bureaucratic art of CYA. So, what next?

“The board reports directly to the Minister, not the Permanent Secretary and takes policy directions from the Minister. Cabinet is satisfied there are indications where the previous board may have departed from policy and where certain actions, such as personally making travel arrangements, would be in breach of policy guidelines.”

….Cabinet has acted to reconstitute the board”

Yawn. More blame-shifting. Did the minister do anything wrong?

“Earlier today, the General Manager of Petrojam agreed to separate from the company.”

Nope. Minister still in the clear. Petrojam appeared to be on a frolic of its own. The only thing Topsy Turvy did “wrong” was not to know. Even after he saw the cake, enjoyed the menu, and basked in the “Happy Birthday” song, he was done wrong by a rogue board and general manager. Poor Topsy. Sob.

“Our review of the PS’ report and interview of senior personnel in the Energy Division and Petrojam, revealed the process of approval of travel by board members needs greater oversight. All official travel of public officials … must be recommended by the PS for the Cabinet secretary’s approval.

However, it’s not always the case that Ministers, who appoint board members, are aware of travel requests.”

Yep, there it is. Topsy Turvy had cataracts. That’s all.

PM went on with his usually long-winded repetition of his June 26 statement regarding details of corporate wrongdoing; announced (government loves announcements) policy directives for change (maybe except for Education Ministry agencies) but commented specifically on retainer contracts:

Wait a minute. Did I read that right? Was this really said on July 11, 2018? I could’ve sworn I heard exactly the same thing said in relation to Mumble Bumble on March 20, 2018. Well, maybe the Education Ministry didn’t get the 2018 memo. Or was the Othneil Lawrence contract disclosed? Is industrial unrest among underpaid helpers a “fiscal risk”?

Back in 2018, PM concluded triumphantly:

“The Government, by its actions, is showing it is concerned about the serious allegations made and has engaged a process designed to establish facts in the haystack of allegations. Whatever we’re able to verify with our limited powers of investigation and discovery, we’ve acted upon them and kept the public informed of our actions. This government is serious about building a culture of accountability. Accountability is a spectrum of actions starting with an agent (Cabinet, the main agent of policy) reporting to a principal of authority (Parliament, from which government is drawn).”

“The report to Parliament must be on facts. We’ve engaged that process, and where the facts have pointed out weaknesses, we have acted. I’m told the Auditor General in short order will deliver her report, thereby making it unnecessary at this point to mobilise the Public Accountability Inspectorate. Whatever issues are raised in those reports will also be addressed. This Government has nothing to hide, we’re shielding no one, and aren’t covering up anything.

We want to get at the truth.”

Do we now? So why no “process” this time? Why no “verification” based on “powers of investigation”? Why no “facts” in your March 20 report to Parliament established from “the haystack of allegations”? Why has Mumble Bumble resigned as Senator but Topsy Turvy is still in Parliament?

Why summary dismissal? Did the Persuaders have it right 46 years ago? Do some guys have all the luck? Or is someone walking through the valley of the shadow of political death and fearing BOTH facts and truth? Who’s the meanest sunovagun in that valley? Mumble Bumble? Or Topsy Turvy?