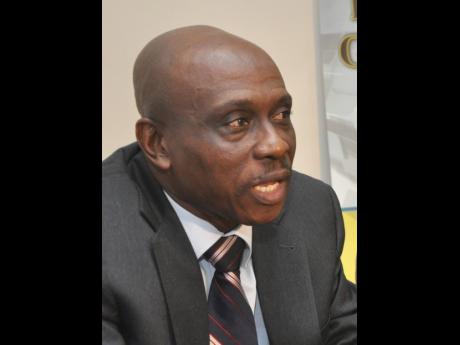 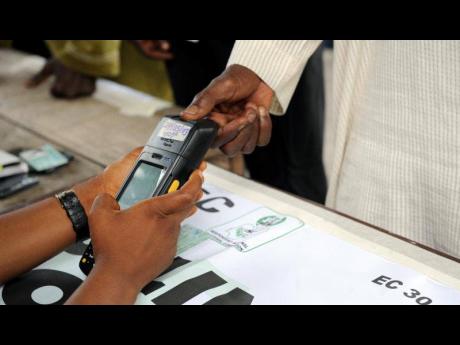 The handheld voting devices, which are used across much of Africa, including Nigeria and South Africa, do not require the same level of field support as the current system.
1
2

This was very revolutionary at the time and actually placed the EOJ on the cutting edge in the use of technology in elections, especially when coupled with the fact that the EOJ pioneered the use of finger prints in the electoral process in 1996-97. The fingerprints of each elector were crossed matched with that of every other elector in the database to ensure no elector appeared on the list more than once.

With EVIBIS, the elector’s fingerprints were used to identify the elector on election day. Once identified, the system issued a ballot with a computer-generated code printed on the reverse, to certify it was issued using the system. The elector then marked the ballot in the traditional manner. This should not be confused with electronic voting, which has never been practised in Jamaica.

As technology improved, the EOJ was able to substitute laptop computers for desktops, which, along with smaller printers, fingerprint scanners and the UPS units, increased efficiency. This operation required significant technical support to operate.

Fast-forward to the 2016 general election, when the Electoral Commission of Jamaica (ECJ) approved the recommendation by the EOJ to dispense with the printers. The printer was used to issue the preprinted ballot by printing an authentication code on the reverse of each.

If the system went down at any point during polling, voting continued using the regular means of identification, which meant such ballots were issued by the presiding officer without the biometric identification.

In dispensing with the printer, presiding officers now had the responsibility to hand-deliver a ballot to each elector following identification and authentication by fingerprints. The printers, unlike the laptops, did not have an internal power source and so the elimination of the printers reduced dependence on the public power supply. By ensuring the availability of spare batteries for each laptop, which also powered the fingerprint scanners, the UPS units were no longer required.

With the country scheduled to undergo an islandwide residence reverification in 2017, the EOJ recommended to the ECJ that the exercise be undertaken using handheld devices, which are now widely in use across the world. The information for electors to be verified in any polling division would be loaded on to the handheld device, which would facilitate elector identification using fingerprints and the existing photograph. The data, including photograph and demographic information of the elector, could then be updated and later uploaded to the main database. This would eliminate the excessive use of paper and the associated printing costs.

Three prototypes of the units were demonstrated at a technical committee meeting of the ECJ.

Included among the recommendations is that following the conclusion of the residence reverification exercise, the handheld devices be used to identify electors in subsequent elections.

The procurement of the units, to the best of my knowledge, has not taken place.

It is a fact that the technology now exists where these handheld devices are capable of doing everything the current electronic voter identification system does, and more. They store the photographs, fingerprints and the demographic data required to positively identify an elector on election day.

The time has come for Jamaica to take steps to keep abreast of the technology, in an area where it was once the leader. Having laptop computers stored for years, and not used in a by-election, as is the current situation in Portland Eastern, needs to be reviewed.

The handheld devices, which are used across much of Africa, including Nigeria and South Africa, do not require the same level of field support as the current system. These battery-powered devices, once charged, are able to operate for upwards of 10 hours. The device is also very robust and is able to operate under severe conditions and in the most remote areas, as evidenced by its use in remote villages in Nigeria.

Of significance, also, is the fact that with the use of the handheld devices, the country will be in a position to have all electors identified in a similar manner across the island, instead of the variation (manual vs electronic) which now obtains. In addition, the use of the electronic identification system would no longer be limited to constituencies where there is reliable electricity supply in polling stations.

The issue of personation and ‘dead electors voting’ have been an anecdotal talking point for years. The fact is, the ECJ/EOJ have done a lot to reduce the likelihood of this happening. Amendments to the electoral laws and changes to the system have improved the overall integrity of the process. The scepticism by some stakeholders can be linked to the reliance on the human factor in the identification process. The technology now exists to address this aspect and to increase the confidence level in a system now ranked among the best in the world. Eliminate the reliance on the human factor in determining eligibility to vote.

The laptops and fingerprint scanners currently stored in the vaults at the ECJ should be replaced by handheld devices when the time comes.

If funding is not available to place devices in all polling stations for the next general election, then it should be phased in and fully rolled out islandwide over the next two election cycles.

The benefits include a more transparent and secure system and huge savings, as the money spent on retrofitting polling stations and on technical support during an election would be significantly reduced.