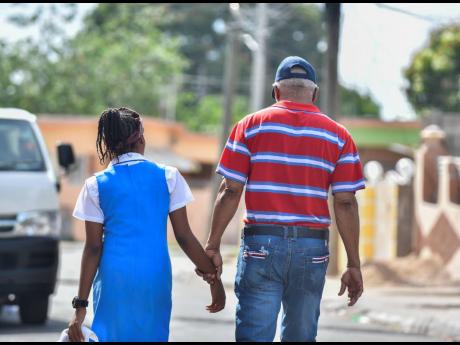 To label it as unfortunate would be to lend shame to the understatement. A man estranged from his wife of longer than a decade who left him months ago because of repeated physical and mental abuse, intrudes on her space, exits his car, gun in hand, and against the repeated exhortations of his 12-year-old daughter, he shoots the mother repeatedly and then blows out his own brain.

I am no trained psychologist, and I would imagine that at this time in Jamaica, one of the worst things to say in any conversation with newly met cocktail hangers-on is, ‘I am a psychologist’.

First is that just about every psychologist in Jamaica is assumed to be rotten rich because the country is so overridden with rottenness and that that top 15 per cent of our people are willing and able to pay for those expensive sessions, which include their relatives in need of immediate intervention.

Second is that the majority of our people do not enjoy this socially safe space. Our men have never quite captured the essence of loving a woman, enjoying and sharing in her sexual mysteries, accepting her as an equal partner and showing her full respect without believing that he has a signed deed for ownership over her life and her sexual choices.

So, can sociologists explain to us that difference between the primordial urge of the males of almost all species to bring violence to the controlling in the herding of their female ‘flock’, and, within the male of the human species, society’s reality must mean that he must act more human?

Don’t get me wrong, but isn’t man merely the end result of the dark beginnings of biological evolution? Is it not plainly shown to us in our global observations over many years that we men still have attached to us the very failures of our early beginnings?

There have been too many incidents of Jamaican men killing their women who have rejected them in relationships.

In the most recent incident, where the perpetrator killed himself at the end, a child witnessed it all. Twelve years old.

“I was four years old when I saw my father stab my mother to death,” said my 53-year-old friend to me years ago. “I am still not sure that I will ever recover from it, but if that young 12-year-old child should need some assistance in her recovery phase, I would be willing to help.”

Men, it seems, especially here in Jamaica, are not socially disposed to accepting that in an intimate relationship, they do not carry a bank note of ownership over the woman’s sex organ and who she shares it with.

Then again, the man is such a fool to believe that once a woman leaves him after years of cohabitation, it must mean that she has made a sexual choice and that he has been excluded from the new equation. To him, he has been rejected, and to the extent that his ‘sexual magnetism’ has constantly made up the majority of how he figures he really is, he becomes a lost soul and, tragically so, a dangerous person.

The two most difficult institutions to navigate in life are parenting and intimate relationships like marriage and long-term cohabitation such as we mostly have in Jamaica. Striding proudly into this understanding is the Jamaican male, the majority of whom have never accepted that the women in our lives are any more than mere extensions of our sexual urges and choices of the moment.

I was 28 years old and my wife and I were at a party in the socially lush atmosphere of Jacks Hill. I was feeling good and so was my super beautiful wife. We were going to have the best of times at that party, and much later, we would go home to our young children being watched over by a live-in helper. Then we would indulge privately in another new sexual discovery.

The question is: why did I mess up the moment?

We danced to about four or five songs then I decided to sit down because I had a male friend at the party.

My wife said, “Can I go and dance with someone else?”

She danced with the guy once, twice, three times. Then my foolish ego took over. After two more dances, she returned to the table, smiling and hugging me.

“Let us dance after this,” she said.

In my foolish mind, all I was constantly conjuring up was the recent few moments of her dancing with that guy, who was not me. I was headed to a dangerous place. Plus, I had been drinking.

She was drinking Pepsi. I was drinking whisky. Two of her sisters were at the table and everyone was superhappy. Something in me just could not get over the idea of my wife repeatedly dancing with that guy and seemingly enjoying it.

I calmly took up the soda bottle and emptied its contents in her lap. The table exploded while I sat there calmly.

“Are you mad?” my wife said while her sisters excoriated me and one even began to cry.

My friend said to me, “Wiggy, yu aright?”

I pretended I didn’t hear him. I knew I was wrong, but in a weak but strongly urged-on part of my mind, I had no intention of apologising. That was the struggle facing my undeveloped adulthood.

I took a taxi home that night, knowing that my wife would be safe with her sisters. The crazy thing was that in a crazily short period of time, I did care about the outcome. All that mattered to me was that I was a man and had to prove that I was a man. Ownership can be taken much farther and into tragic territory.

WE NO LONGER TALK TO EACH OTHER

The longer a relationship lasts is the more prone it is to conflicts. Ironically, the duration of that same relationship provides us with more ease in the resolution of those conflicts.

“Me an mi woman live five year wid each odder, and me and she hardly talk to one annoder,” said an acquaintance of mine, genuinely seeking a solution to his intimate relationship.

“Are you having sex with each other?” I asked. He answered in the affirmative, but his answer provided another ‘but’.

“Assuming she also loves you, do you like her?”

He was most puzzled.

It was then that I told him that liking the person one loves is probably the most important factor that can beautifully make its intrusion on an intimate relationship.

Many of our young men are growing up with the belief that the women they cohabit with are theirs to love, live with, beat up, dispose of, and joke to their friends about.

And because of the collective emotional weakness of the Jamaican male, a torrid sexual bout is never ever that far from a slap across the face and a foot in the gut, violently tugging the woman towards him, owning her.

The longer the relationship is, the more prone it is to conflict. And it also provides the need for couples to get to that new level of liking each other and talking more with each other.

Yes, we are a violent people, but there is better. The man has the bigger role in recognising his failures first. Especially since he believes he is the chief warden who has the right to tell a woman how long she must remain in his prison and what must be the restrictive terms of her parole.