Martin Henry | A petition and the responsibilities of the citizen 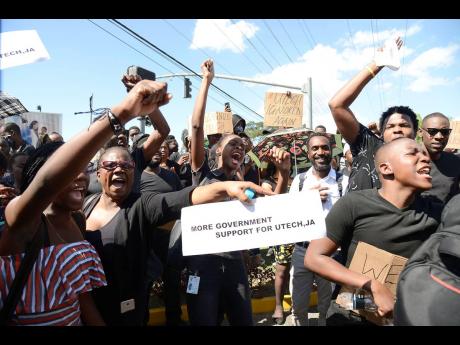 “Congress shall make no law…abridging … the right of the people to assemble, and to petition the Government for a redress of grievances”

– First Amendment, Constitution of the United States of America

While the 36,315 enumerated voters in Portland Eastern were enduring the campaigning for their votes and deciding who to vote for from two mostly indistinguishable political parties, as far as policies, plans and programmes are concerned, or not to vote at all, I signed a petition.

Voting is only one element of a citizen’s political engagement in a democracy. And it may not even be the most important one. The overwhelming majority of the 53.5 per cent who marked their X have gone back home to endure the non-fulfillment of campaign promises, to remain disengaged from their parliamentary representative, and to patiently wait for the next election, merely “voters”.

The very concept of “citizen” is not even understood by most of our citizens beyond being attached to a country by birth or naturalisation. The politically rich and original notion of the citizen as one who is actively engaged in the life of a political community (the polity) with a set of rights, responsibilities, and duties, and who understands the political and economic processes, institutions, laws, rights, and responsibilities of the polity is largely lost.

So, as citizen, I signed a petition over a grievance against the Government of Jamaica. But first I joined a peaceful protest assembly in the streets.

On February 20, University of Technology (UTech) students, supported by aggrieved staff, led a peaceful street protest against the inequitable and unjust treatment meted out to them by their Government with respect to the allocation of public subventions to public tertiary institutions, with UTech receiving the lowest per capita allocation.

Citizen Cheryll Messam, who also happens to be a UTech employee, courageously sought to launch a subvention petition on the Jamaica House Petition website, which the Government has recently established for citizens “to petition the Office of the Prime Minister on the issues that matter to you” The offer says, “Get 15,000 signatures in 40 days, we’ll review your petition, and if it complies with agreed standards, the Office of the Prime Minister will issue an official response.”

Citizen Messam submitted this petition: “Government of Jamaica, increase the subvention to the University of Technology Jamaica commensurate with need.”

After waiting some days without receiving any indication of whether the petition would be accepted or published, she turned to the petition site International Change.org. The subvention petition garnered and exceeded the 15,000 signatures in 26 days.

Citizen Messam has submitted the petition data, including hundreds of supportive comments to the prime minister and Minister of Education Most Hon Andrew Holness, to the oversight minister for the education portfolio Hon Karl Samuda, and to the Permanent Secretary Dr Grace McLean, herself a doctoral graduate of UTech. Backed by 15,000+ signatures, she has respectfully requested that the Government bring “this matter to timely resolution and advise the Management of the University of Technology, Jamaica and the nation of [the resolution].”

On the day of the subvention protest, a closed-door meeting was held among the Ministry of Finance, the unions, and the university management.

Out of that meeting, the minister wrote the following day, February 21, to say: “… I understand and acknowledge that this matter has a long history. I have committed to ensuring that teams from both ministries [finance and education], over the next few weeks, provide me with a full briefing, including the historical antecedents … I maintain, as stated, that UTECH has a crucial role to play in equipping citizens with the knowledge and skills for entrepreneurial activity as well as the evolving job market, and I commit to helping UTECH to play that role. I believe this is supremely important as we work towards the provision of an enabling environment for sustainable economic growth.”

I received a copy of the letter as a member of the academic staff union, and I am treating it, as a citizen, as a public document about a public grievance, which the staff and students in a public education institution have against the Government. Mr Clarke has subsequently missed every deadline commitment to write to the aggrieved parties with a decision.

Among the important “historical antecedents” of which the minister has been appraised is the fact that the university has grown from the 6,500 students on the “establishment” of the 1990s to the current 11,500 on account of the Government placing a number of other pre-existing training institutions under UTech and on account of the state policy for the expansion of access to tertiary education from five per cent in the early 1990s to the current 15 per cent.

One visible consequence of the state starvation of UTech is the state of the labs. The university is now executing a foods analysis project with foreign grant money and the minister of health is eagerly awaiting the results. But the UTech labs are so far back that they are unable to accommodate grant-financed advanced equipment, which has to be installed and used in the better labs of other agencies.

Former Minister of Education Ronald Thwaites and now opposition spokesperson has publicly expressed his regret over not fixing the problem during his tenure.

The obstructionist stance of Government was evident in then Minister Ruel Reid’s response to the student-staff protest:

- “They know the staff complement of UTech is to be regularised before there can be any consideration for adjustment.”

- The disparity in funding between UTech and the University of the West Indies (UWI) [the UWI receives three times more subvention on a per capita basis], he vociferously told media, was primarily due to UTech expanding its programmes and employing several persons without the approval of the Government. Government, therefore, cannot provide grants for positions that were not approved.

Implied, the institution should, therefore, send home 5,000 young Jamaicans, against Government policy to expand tertiary education, and should cut staff to match the static subvention.

But God moves in a mysterious way, His wonders to perform. Minister Reid is gone. Education is now under the control of the prime minister, who had the Jamaica House Petition website set up and who keenly understands street and town-square political action. There are 15,000+ signatures to the subvention petition. The prime minister is aided in education by Karl Samuda, who has spent a political lifetime fighting for the underdog. The Opposition, through its spokesman, supports the principle of the subvention petition.

We, the citizens, can and should take other actions in the discharge of our responsibilities, with or without voting. The green papers of Parliament allow citizens’ input into the formulation of law and policy. Very few make submissions written or oral. Anyone can request to appear before a Joint Select Committee of Parliament to argue a position.

We don’t pressure our constituency representatives to represent our interests in the Parliament. They can bank on our somnolence and they represent their party’s interests. We don’t form enough groups to agitate for change. Versed in the art of scrounging for personal favours, we don’t lobby ministers in the larger public interest.

We don’t use media with strategic dexterity to orchestrate public pressure on Government. And media, the Fourth Estate, does not probe deeply and consistently the shortcomings and corruption of Government. We don’t make recommendations to public agencies to give feedback to the political directorate for change.

We vote – in declining numbers – and go back to sleep. And it suits the Government.