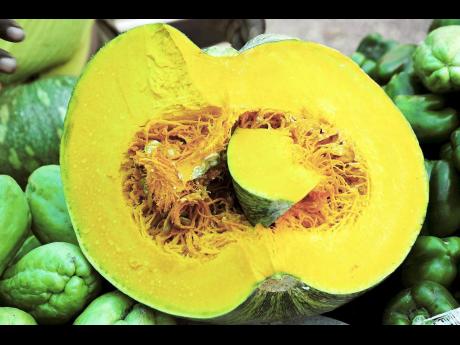 Please, can somebody help me with Audley Shaw’s cell phone number? Not the one assigned by Government on which he ran up $8 million worth of call debts in another ministerial life. That number is probably managed by one of his many administrative assistants. One for Industry, one for Commerce, one for Agriculture, and another one for Fisheries. I want the number on which his family and friends call him.

I spent a chunk of my short vacation leave at Easter planting four roots of pumpkin. I am not so young anymore. Older, like most of the small farmers across the country. I was fighting the flu. The dutty tuff. And I was using hand tools, the pick and the ‘lass, like my peasant farming parents before me who died in poverty. Thank God for the Common Entrance.

I am going to need Audley. I want a hotline straight to him. I have great expectations for my four roots of pumpkin, which qualify me as a proud Jamaican small farmer. I mulched the roots with my own compost. And I am expecting 10 pumpkins per vine. With two seeds in each root, that’s 80 pumpkins. Enough to set off a glut in the market. Like gluts past and gluts yet to come. But not to worry. Audley has personally found a big market for pumpkins at the very time I decided to go into pumpkins big time.

In his Irish Moss and roots tonic and pushing pumpkins on Easter Monday at the St Mary Agri-Expo at Gray’s Inn Sports Complex in Annotto Bay, the minister of agriculture, etc, urged farmers to grow more pumpkin as he has found a market for any amount they can produce. Hear the Big Talk. Shaw told farmers at the Expo: “All the pumpkin you can produce, you produce it. You hear me? I have an exporter in Manchester.”

Then, in Shaw style, he ramped up the story. “I got a call from up in Clarendon,” he charms his audience. “‘Mr Shaw, we cyaa sell wi pumpkin’. Within one week, all the pumpkin dem have di man tek it off an’ ask mi if that’s all him can get. Him get ‘bout three trailer load a pumpkin. He has told me that he has a market overseas for 12 containers of pumpkin per month in Jamaica. Unnu plant unnu pumpkin! Plant yuh pumpkin. I have the market for it.”

The minister said that he is aiming to develop five markets that will enable farmers to sell their produce more readily – hotels, which he said would have to be targeted in a more systematic way; CARICOM; the Jamaican Diaspora in the United States, Canada and England; the exotic market; and a school-feeding programme, which he promised to speak on in Parliament the next day during his contribution to the Sectoral Debate. And he did. But not a word about the Great Pumpkin Plan.

Ahem. Been there. Heard that. I hope the farmers gathered at Gray’s Inn, where both sugar and then bananas have died as major export crops, were sober enough on a party day to notice that only the ‘three trailer load’ a pumpkin already taken by the secret ‘Big Exporter’ is not a promise. And it’s not even the Ministry of Agriculture, or RADA, or the AMC, which Shaw wants to bring back from the dead, or the JAS, or a commodity group that is behind the ‘three trailer load’ a pumpkin shipped. “Is me, Man a Yaad, do dat,” Shaw slapped his chest in hearty self-congratulation. Hardly the way to run government policy, plans, and programmes for agriculture or anything else. And this is a much bigger concern to me than my four roots of pumpkin.

Which crop has not been touted for special attention by some minister on a roll over the long, weary years of decline in agriculture?

I have slightly more than four roots of lemon grass. Planted with the sound of the trumpet in my ears that lemon oil was an international commodity on the upswing and any amount that could be grown could be processed for export. The SRC put out glossy literature. I went to Bodles to buy planting stock and almost drop down from shock at the state of the country’s premier agricultural research station, which I knew in its heyday.

Only a fraction of the first harvest of lemon grass was ever sold. It’s been several years now. The lemon grass has gone through multiple cycles of fresh growth and die back and has seeded on a scale I have never seen before. I’m just wondering if the seeds have the potency for something, like ganja seeds have.

I’ve moved on to pumpkin. I need Minister Shaw’s personal cell number so I can get a link up with the secret Big Exporter, or I can trace off Shaw for another deceptive commodity plan. That is if he hangs around agriculture much longer. He was shifted there from finance only a year ago. Each minister has a pet project or two for the next big commodity. This doesn’t necessarily need to be rooted in long-term policy, plan, and programme in Public Administration and which can survive the minister and even his entire Government. It’s just a personal Pumpkin Plan.

On Shaw’s side, Christopher Tufton was the Cassava Man. He was laughed to scorn. But cassava took root for reasons bigger than Tufton, with lessons for making agriculture work for its smallest participants. A major beer manufacturer wanted to use local cassava as a substitute for imported grains. Red Stripe grew some for itself and entered into partnerships with farmers to supply, with support from the company. There was a secure, guaranteed market and credit was available.

Cassava farming suddenly became a business vertically integrated with manufacturing. And pricing has been worked out to allow the grower to mek a money. Roger Clarke had famously quipped that he couldn’t take the offered price to farmers, as minister of agriculture, because di man dem have dem ‘lass. Small farming, 220,000 strong, is largely a subsistence activity, with welfare support from the Government. Despite flinging them together in one superministry, you don’t hear small farming mentioned with MSMEs. After all, business is business.

Karl Samuda, Shaw’s predecessor at MICAF, seems to have had a thing for dairy, an industry in which he himself was a private player. Remember that little Mombasa grass matter in which the minister became embroiled as the public agency for milk selected his farm for trialling the grass as feed? There were gushing Samuda plans for the resuscitation of the dairy industry. Where’s the milk now?

Having been shifted to ‘oversee’ Education, as he is overseen by the prime minister while overseeing Education, I have been hoping and praying – and writing – that Karl Samuda can get beyond any ministerial grandstanding and rise to dealing with the justice issue of a fair and equitable subvention to the University of Technology.

But perhaps a quiet personal call may help the matter along better. Can anyone help me with Mr Samuda’s personal cell number, please? I might as well ask fi Andrew number, too. ‘Im run everything. For this is the way of getting things done. Know a man and call a man. And work your way around a system that does not work.

I’m still dreaming of getting my bumper pumpkin crop sold. I’d like to get in touch with the Great Pumpkin Marketer, Hon Audley Shaw, Minister of Industry, Commerce, Agriculture and Fisheries.