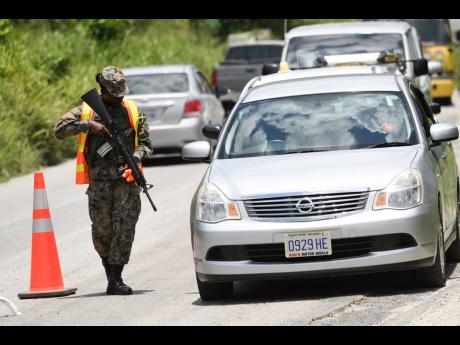 Ricardo Makyn
A member of the Jamaica Defence Force mans a checkpoint in Whitehouse, Westmoreland, on Friday. Last week, a state of public emergency was declared for Westmoreland, Hanover, and St James.

The horrific rape and murder of little girls are very definitely expected to force us to ask ourselves if we are a nation of people or just an extended pack of feral beasts constantly on a predatory hunt.

Jamaica has long been populated by an especially aggressive set of people. There is, of course, the good aggression, where we do not allow others with money and social power and superior education to steamroll over us. Many times, against all odds, the most deprived of us make it, do well here, and, most importantly, create a better path of advancement for their children.

Then there is the destructive aggression usually found close to many of us who are undereducated, generationally wrapped in poverty and whose daily life requires them to regularly face mental and physical pain. To exist, it requires many communities to have their people in a constant anger fit, and never too far from their minds is the threat of bloody violence.

Prior to 1988, the age of consent was 14. Prior to those times and long after, especially in the rural areas and in the many informal communities which gave rise to the term ‘inner-city areas’ in the urban centers and small towns, many Jamaican men never allowed the law to disturb their seriously warped sexual behaviour.

Many of our menfolk have never really accepted our girls and women as equal to men, especially when preteen girls and young women would dare to express their freedom to express their sexual choices as in, “No, I am not interested. I am just a little girl. Leave me alone.”

I am reminded of an incident a young man related to me in the mid-1980s. We were by a little hut in a huge ganja field in the hills of Clarendon. As he said, he was in a section of thick bushes having sex with a girl who had consented to the act. Unknown to him, one of his friends heard rustling and familiar sounds and furtively spied on them having sex.

When they finished, his friend told him that he saw them and while having a good laugh, much to the embarrassment of the girl, suggested to the girl that she should give him ‘a little piece’. The girl said a big no, but it did not go down too well with the two men.

“So di two a wi jus hold har dung, and mi mek my friend get him piece.”

I expressed shock when he told me.

“That was rape!” I said, expecting him to maybe utter some words of regret.

He laughed and said, “Shame on you, Mr Mark. Is jus a likkle piece. A nuh rape dat.”

MANY OF US ARE MENTALLY SUSPECT

The natural aggression in our people, especially our men, who, in recent years, have taken huge body blows to their ability to earn and feel like a man as they see women race ahead of them, cannot be easily arranged in an equation and all the bits and pieces worked out and properly understood.

We may have moved many of our people up the modest ladder of literacy, but unfortunately, the growth in functional literacy since we began to laud our literacy successes has not kept up with the broader literacy goals.

As a result of this, there are many men in Jamaica who have made it a duty to themselves to devalue the virtues of being decent, good, and to be respectful and kind.

“Shi mek more money dan me,” said 41-year-old C to me last Thursday. “An from she reach dey so, she feel more free fi diss mi.”

He mused for a while then said, “If yu soft it out, dem all keep man right unda yu nose.”

He admitted that he is unafraid to hit her, either across the face or give her a kick to the belly. When these things happen, C seems untroubled and without remorse as they temporarily have another makeup.

There is a myth that states that after plantation rebellions on various island territories during slavery, those leaders captured were sent to Jamaica. When I spoke with Professor Verene Shepherd a little over a week ago, she said: “No such thing. Why would it suit the plantocrats to allow the leaders to live? They were hanged.” Then, in any case, Jamaica had the highest number of slave rebellions.

Which probably means that our aggression DNA has been here from the moment of our arrival.

“But how do you explain this matter of violently forcing sex on little girls and then killing them?” asked my journalist friend.

The culture of man and young-girl sex has been here with us from the time of the 1950s. Well, at any rate, that was the time of my childhood, and it was pretty accepted, especially in deep rural areas.

The race from the 1950s to now has been one fraught with social and political danger. Many in the population have been economically empowered, but for many others, the exposure to the possibility of more of life has been seen by them as near impossible unless lawless routes are taken.

“As a man who had to fight his way with the understanding that physical aggression was an integral part of his toolkit to advancement, many of them made the seamless path to taking this aggression to women,” I told him.

“So if him want a likkle 12-year-old, him may ask the mother. Some poor mothers have traded out their young daughters. I am constantly told this by my police friends. Some end up hustling Ochi streets or Backroad,” I said.

The more terrible reality is that our men’s aggression towards women in the society has gone off kilter, and where lack of education and a short fuse meet, then any age girl will be had if the fevered brains of these men are given free rein.

WELCOME BACK STATE OF EMERGENCY

One senses that the prime minister is not just preening his political feathers in reinstituting the state of emergency (SOE) in three parishes. The PM knows that the soundness of his national security approach has given it support from the majority of our people.

At the end of the initial 14 days that the PM is allowed, the SOE can only continue on a longer basis if PM Holness convinces PNP opposition leader Dr Peter Phillips that history demands his action and support in the present.

It has always been known that our criminals living close to the tourist resorts of Montego Bay, Ocho Rios, and Negril have made tourists there safer than the rest of us who were born here and live here. On this basis, the big hoteliers may not necessarily welcome the resumption, but they know that economically, the high crime rate in the adjoining areas will only affect them in the embarrassing newspaper headlines of another set of murders.

One wonders whether there is a long-term fix and someone, somewhere here has that magic plan; that desired sweet elixir.

The argument has been made by the governmental authorities that they are our partners in the fight to rescuing our society, but the society is not ready to fully buy into the message. Too much distrust has stuck to the walls, and every time the people are wooed in a new partnership, the ceremony is held, but bride and groom eventually go their separate ways.

Immediate fixes to our national security apparatus are needed and even the utilisation of ‘No Man’s Land’ for another great security push is all important.

But how do we get many of our men in a mental place that will convince them that raping and killing a seven-year-old and an eleven-year-old is terribly inhuman?