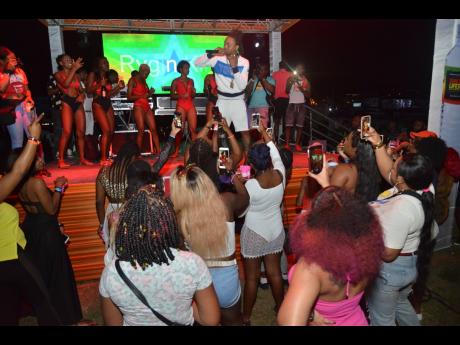 Kenyon Hemans
The Noise Abatement Act is bigger than the big-entertainment industry. It covers “political meetings”, “public meetings” free or for fees. And it covers private parties and gatherings on private premises. Churches and industrial noisemakers are not exempt.

I am sounding the alarm for all sleeping citizens who want to sleep peacefully in the privacy of their own homes in the future to awake now.

Consultations on the Noise Abatement Act are not “about to begin”, as a JIS news story reported on April 18. consultations have begun, and, so far, these ‘consultations’ have left out the ordinary citizen who just wants to enjoy a less noisy environment, especially at nights when it’s rest and sleep time.

The Noise Abatement Act was promulgated on March 26, 1997, 22 years ago, and has not been amended since. From day one, it has come under pressure from the noise-making entertainment industry. From day one, the law has been inconsistently enforced by the police.

The Noise Abatement Act wasn’t really a new law. It was a pull-out with amplification of sections of the 19th century Towns & Communities Act. The fundamental premise of the T&C law was, “Thou shalt not be a nuisance to thy neighbor when thou art pursuing thine own interests.”

Every law is a balancing act between two or more contending interests. A fundamental function of government is to be Grand Arbitrator, just and fair, in the making and enforcement of the laws of the land designed to protect and to balance the enjoyment of fundamental rights and freedoms by all.

People have to make noise. And people have to have respite from noise. More than many other laws, the Noise Abatement Act, 1997, was explicitly intended to be a balancing act between those who have to make noise in the pursuit of their interests and those who wanted freedom from noise nuisance through noise abatement, particularly at rest and sleep times. There have been bitter complaints from both sides. And after 22 years, it is well past time for the law to be reviewed.

But I am a worried man on the side of the noise abaters. The April 18 JIS news story, ‘Consultations to begin on Noise Abatement Act’, says, “Consultations with key stakeholders from the ministries of entertainment, local government, and national security are to begin regarding amendment to the Noise Abatement Act and the hosting of entertainment activities.” Where are Joe and Jane Bloke, the unorganised regular citizens, in all this?

NOT SELL THEM OUT

In his opening contribution to the 2019-20 Sectoral Debate in the House of Representatives on April 16, Minister of National Security Hon Dr Horace Chang said that in the current legislation, there is always conflict between promoters and members of the Jamaica Constabulary Force (JCF).

But the Noise Abatement Act is bigger than the big-entertainment industry. It covers “political meetings”, “public meetings” free or for fees. And it covers private parties and gatherings on private premises. Churches and industrial noisemakers are not exempt.

Noting that under the act entertainment sessions must end at midnight on weekdays and at 2:00 a.m. on weekends, the minister told Parliament (did I hear a sound of regret?), “I cannot ask the police to use discretion, the law says so. I have, therefore,” he announced, “requested the minister of entertainment to consult with the minister of local government, and we will come up with an appropriate amendment to the law and establish a protocol for the conduct of entertainment activities.” He said that entertainment is one of Jamaica’s biggest industries, which offers opportunities to many from the various socio-economic groups.

The consultations had begun and were running even before the announcement in Parliament. Driven, no doubt, by the powerful entertainment/music lobby, the noise issue has been framed as an entertainment issue. So the Observer could run an April 26 story under the headline, ‘Grange, Chang optimistic after meeting on entertainment issues’.

The story said: “Minister of Culture, Gender, Entertainment and Sport Olivia Grange says she’s optimistic about finding solutions to address ongoing conflict between the police and promoters/producers of events.

Grange was speaking ... after a meeting with Minister of National Security Dr Horace Chang, the police, the National Environment and Planning Agency (NEPA), and other stakeholders to consider amendments to the Noise Abatement Act, which regulates entertainment events.

“I’m happy to say,” the entertainment minister said, “that we have arrived at a framework within which we will work.”

John and Jane Citizen have to have a say about that “framework”. The problem is that they have no organisation and must rely on their Government to defend their interests and not sell them out.

Meanwhile, Dr Chang noted that “we have been having major challenges in our entertainment activities throughout the country, and some places are particularly difficult, especially places like Negril, because of the current law that controls entertainment.”

“Entertainment is one of our largest industries and an area [in which] we have more of our humble people with creative talent having the opportunity to develop and give individuals good income and improve their quality of life. And we have to ensure that we put Jamaica’s entertainment industry on a solid legal footing,” he added.

Acting Deputy Commissioner of Police Fitz Bailey said he would discuss the proposals with the police commissioner, other members of the High Command as well as divisional commanders. “We will have further dialogue because we believe that it’s a partnership approach that needs to be taken to treat with the issue of entertainment because it is important to the development of Jamaica.

“We don’t want entertainers to see us as their enemies. We are friends. And we want to work as best as possible to resolve some of the issues that we are currently faced with,” Bailey said.

WHO SPEAKS FOR THE CITIZEN?

Should noise abaters be alarmed? I am picking up the very distinct and uncomfortable vibes that two key ministers and the police have already been captured by the entertainment/music industry, with John and Jane Citizen remaining outside the consultation room.

An earlier story (April 4), ‘Pull it Up! Discussions on about Noise Abatement Act’, said, “The Jamaica Reggae Industry Association (JaRIA) is among a number of groups currently involved in talks to influence changes to the Noise Abatement Act ... . In addition to JaRIA, the other bodies contributing to the discussion include the Jamaica Constabulary and Jamaica Defence forces, environmental agencies, government ministries and agencies, including the Urban Development Corporation and the National Solid Waste Management Authority.”

Who speaks for the citizen who wants to enjoy peace and quiet in his own home, especially at times for rest and sleep?

This piece of legislation, the story said correctly, governs sound in public spaces and its effect on persons and the environment. Not specifically entertainment. But “For persons in the entertainment industry, this has been particularly contentious as it regulates the timing of events which are required to end at midnight on weekdays and 2am on weekends.” Chairman of JaRIA Ibo Cooper is leading his organisation’s charge at these talks. He hopes the discussions conclude with a suitable deal.

Cooper gave a long defence discourse to the reporter. “Entertainment is part of the lifeblood of this country, so we have to consider all the possible permutations. So, while we keep the entertainment industry lively, viable and beneficial, we have to bear in mind all the human and environmental concerns,” Cooper said. JaRIA cannot be expected to or be left to look after the citizen’s interest in the matter.

Jamaicans like their entertainment loud and strong. And we do not have many established entertainment zones where nuff noise can mek and people can still relax and sleep in the comfort of their homes far away. The streets, public thoroughfares for everyone, are the main entertainment zones which allow one set of citizens to become a nuisance to another set.

We need a just and fair ‘Sound Regulation Act’ (as JaRIA wants it to be called), balancing the interests of the makers of loud sounds and the interests of those who don’t want to be disturbed, harassed, and stressed by other people’s noise.

The poorly policed 1997 Noise Abatement Act was a fair start. Citizens for Peace and Quiet must not abandon the overdue revision of the act to the loud and strong entertainment/music industry lobby.