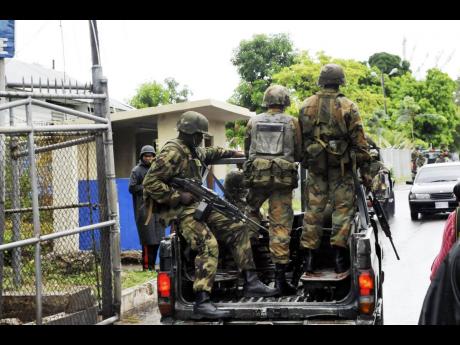 Norman Grindley
The infection of the Jamaica Constabulary Force by criminal elements, businessmen and politicians will not change due to Mobile Reserve being dissolved.

He is a Jamaican lawyer, very well known, but he would prefer that his name not be attached to anything that I may write in this article.

Last Thursday, he emailed me:

“So, the Mobile Reserve (MR) is to be disbanded. I am not sure that such a measure attacks the overall problem of police corruption and misdeeds, but it is a start. However, MR is large, some 500 members. They will not all be removed from the force, so the ‘squaddie’ mentality will still be in the force, maybe diluted, but spread all over the force. We still need specialized units to deal with riots, hostage situations and so on. Thus, there will be a new unit, perhaps a SWAT unit or Special Response Group. But the infection of the JCF (Jamaica Constabulary Force) by criminal elements and businessmen and politicians will not change due to the MR being dissolved.”

Then, as we spoke, he made comments about the Spanish Town shooting involving police shooting at police. He said, “There is so much that is scary about this incident, including that an innocent bystander, the driver of one of the vehicles, was killed in the gunfire. I get the awful feeling that police bullets killed him. So even if there were good policemen involved in the incident, the good cops may have been reckless and killed an innocent person. Only in Jamaica can this type of incident occur.”

I disagreed with my friend that it is only in Jamaica that these things happen, and we spoke about that. We moved on as he said, “And to top it off, one of the policemen, who is removed from front-line duties, alleges he is a good cop and that he and his colleagues did not kill the man in question at the party, which triggered the whole ‘wild west’ incident. Then the commissioner of police (COP) states that if you are removed from front-line duties, but not suspended, you can have your service weapon and access to JCF resources. The COP is an intelligent man.

If a police officer is removed from front-line duties, his judgment is in question, he/she cannot have a gun and access to JCF resources. What is the commissioner of police thinking or not thinking?”

TOO MANY SCHOOLS TURNING OUT DUNCES

Education in this country – as a big policy that is spoken about at all the important forums held in this country and in the regional loud whispers – is one of the biggest scams perpetrated here.

Education is a numbers game. Plainly stated, it is wrapped up in this basic understanding. It is about getting the most of the poorest in schools and quality of school is unimportant. So whenever we have a prime minister like Michael Manley, who announced in the early 1970s free education up to the university level when the country did not have the means to sustain such a worthwhile educational push, we praised it, but it was all a dream, a mirage that floated off in the early morning mist. And coming from the Common Entrance 70/30 per cent split, which took away the advantage from those children at private prep schools, many of us had the impression that many more of us would pass through that gate to social and economic empowerment.

In fact, the policy has done much of that, but at the same time, it has cultivated large numbers of those who are undereducated. But, at the very least, they have the eyes to see and the ears to listen to a society that was constructed to pose roadblocks to their development. And the majority of these disadvantaged people are obviously now equipped to look at themselves in the mirror and see themselves as ‘losers’.

That is not a nice place to be.

We are at that place now where we have to respond to the common voice in the ether. And that voice is saying, “We must do something now. Immediately. Too many people are scared.”

The first time I saw dunceness in action was in Grants Pen in the 1990s. The man had his woman, and the woman had her man. They had been living together for seven years. One day, some thugs saw her walking along a path on a gully’s edge. They grabbed her away while muffling her mouth.

For the three days that they held her, she was repeatedly raped and generally roughed up. When she tore through the zinc shed they had held her in and made her way home to her haven, her man, it was hell on top of fire.

When she told her man what had happened, he beat her until she vomitted.

The mad thing about all of this is, he was the one who told me.

“She good fi a lie, so jus in case, shi haffi get a spanking,” he said.

“Did you consider that she was telling you the full truth and did not run off with some strange man?” I asked.

He agreed that he believed that she had been seized and raped, but he didn’t want his friends to think he was soft had been as many of them were urging him on to apply a physical beating to his woman. So he slapped her hard across the face, and as she shielded her face, he punched her in the gut.

Sometime way back in late 1980s, a bank overpaid me on a cheque to the tune of $6,300. It was a Friday, and I knew the young lady who was the bank teller.

When I made contact with her, she grabbed me and kissed me. “I eventually left the bank at midnight, but not before seeing that it was on your transaction I made the error,” she told me.

On the verge of being fired, she told her supervisor that she knew the person and that the “funds were safe”.

When I boasted to some of my acquaintances what I had done, they labelled me a fool. And on that note, I must offer congrats to the lady who returned the plastic bag of money she found in an ATM.

That those closest to her have condemned her is not at all surprising to me. Too many people are dragged up through a life filled with brutality and pain to the extent where as they reach adulthood, they become the very beasts they once feared. They know nothing about being ‘brought up’, loved and nurtured. So, at some stage, they naturally hit back. And oftentimes, it is against those they were supposed to love the most.

“Dem kick him outa school,” he said to me.

He was talking about his son, who was accused of being in a gang at a well-known brand-name high school.

“You never know that a 15-year-old boy gwine give trouble and you have to watch him like a hawk?” I asked.

He answered in the affirmative, but when he was on the verge of shedding tears, I changed the subject. His son is now heading to a school that will guarantee him (based on its history over the last decade) that he will not even pass three CSEC subjects.

“Why you don’t enrol him in a vocational school?” I asked.

“Him sey him want turn architect,” he said.

“Is he skilled at maths?” I asked.

He told me that the youngster was weak at maths and the English language.

“He is going to a special maths class, but him don’t look like him too interested,” he said.

I changed the subject.

-Mark Wignall is a political- and public-affairs analyst. Email feedback to columns@gleanerjm.com and mawigsr@gmail.com.