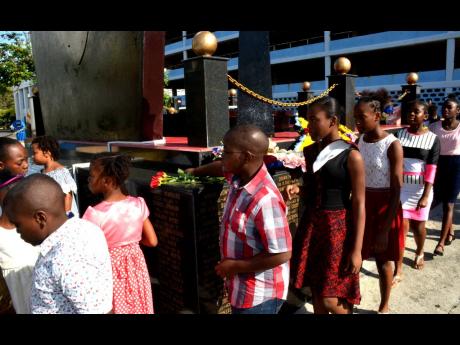 Why is the Kingston and St Andrew Municipal Corporation further traumatising our already highly traumatised children?

On a bright and beautiful Sunday morning, right at the start of Child Month, little children dressed up in their Sunday best were called upon (forced might be too strong a word) to march with long-stemmed red roses and to reverently lay them during the wreath-laying ceremony at the Crying Child monument at Secret Gardens on Church Street in war-ravaged downtown Kingston.

The adults present were bawling. I am here bawling, too, hunched over my computer keyboard. What about those little children confronted with the tragic deaths of hundreds of their own and bravely doing as they were told, marching with those long-stemmed red roses?

The Crying Child monument, with those extreme tear drops coursing down the sculptured face of the child, has to be the most horrible monument in the entire country. I avoid it, planted there on Church Street close to the offices of the KSAMC. The area itself has experienced the degradation of downtown Kingston, a consequence of the political tribal wars coming forward from the 1970s and of shameful neglect by the Jamaican State, which can’t protect its children either.

You have to be a certain age, greater than the age of Prime Minister Andrew Holness or Mayor of Kingston Delroy Williams, to remember grand and gracious Church Street and surroundings. The condition of the area is a good enough reason to avoid the Crying Child monument in the Secret Gardens.

But the massive emotional drag imposed by the monument is an even bigger reason to stay away.

I am not nearly as tough as the little pic above may suggest. I wept in the Apartheid Museum in Soweto, South Africa, and at the foot of the Peace Tree in the British Museum, made from real guns from the civil wars that devastated Africa in recent times. I can’t promise to visit the House of No Return in Ghana and to tread those steps that captive ancestors were forced to walk down to the slave ships for a one way trip to the Americas. Few have been there and not become drenched in tears.

The newspapers have attempted to capture in words the pain of the parents who attended the tear-jerking wreath-laying ceremony on Sunday, May 5. They forgot the dejected children wrestling with what was perhaps the greatest emotional trauma of their young lives.

The Gleaner reported, “Fighting to hold back tears, the mother of 14-year-old Yetanya Francis, whose burnt body was found metres away from her home last August ... joined other grieving parents to lay wreaths at the Crying Child monument at Secret Gardens in downtown Kingston in memory of their children.

“Francis, who was a student of the Kingston Technical High School, left her ... home in Arnett Gardens ... on August 23 last year to purchase food but never returned. The next day, her charred remains were found in an open lot. It is believed that her killers raped her, chopped her in the head, and then set her body on fire.”

Yetanya’s mother, Latoya Riley, speaking with the paper after participating in the brief ceremony, said that the last eight months have been traumatic. “Trust me, it’s hard, but I have to try hang on because I also have a 14-year old son,” she said.

“When I come on the road and see the wreaths, and so forth, my blood run cold ... because it brings back a lot of memories”.

Yetanya was one of more than three dozen children murdered last year. And the horror stories have been pouring in thick and fast this year.

When he was at Education, Youth & Information, Floyd Green advised us that the name wall at the Secret Gardens had run out of space. The monument set up in 2008 has the names of more than 1,000 children who perished under violent or other tragic circumstances.

We are going to need a lot more space for inscribing names unless much better can be done to protect the nation’s children. And I think the children wreath layers would have been thinking of that.

The same May 6 issue of The Gleaner that reported on the wreath-laying tribute had as its screamer front-page story ‘Where are they? 517 missing (January 1-April 30, 2019)’. Annualised, that’s going to run 1,551 for the year. Running neck and neck with the runaway annual murder tally. Then the paper is running, in lovely Child Month, top of the page 2, banners of ‘Faces of our missing children’.

Last year, the police are telling us, 1,512 children were reported missing, with girls at 1,164 outnumbering boys, 348, 3:1. Fortunately, most of these children did return home, and many times parents and caregivers don’t bother to report voluntary returns as they should. One boy and four girls were confirmed dead.

But 155 girls and 31 boys remain unaccounted for. Most of these are probably dead. I see no convincing data of any cross-border human trafficking that would suggest that these youngsters have been spirited out of the country. And in a small, open society where do you hide 186 children?

Things have started out much worse this year. KSAMC chief executive officer Robert Hill, speaking at the Crying Child ceremony, rolled out statistics that said that 11 children have been murdered since the start of the year up to the time. That was May 5.

Referencing statistics from the Child Protection and Family Services Agency (CPFSA), Dr Longmore-Dropinski pointed out that on average, 10 out of every 1,000 children are subjected to child abuse or maltreatment; 79 per cent of children witness violence in their communities or homes; and 68 out of every 100,000 children are victims of a violent crime.

So the trumpet call to protect our children rises to a shrill crescendo at this time of year. The appeal goes out to honourable gunmen and rapists not to hurt children (and women, and the aged, and the disabled). With the taxi cars of a loose public transport system figuring in the abduction, rape, and murder of children and in accidents involving schoolers, like the one with students of Edwin Allen High School a couple of weeks ago, the cry goes up (again) for a dedicated school bus system in every nook and cranny of the country.

But the vulnerable cannot be protected by trying to cocoon them from the rest of a rough, violent, and cruel society. The Gleaner has embarked, it says, on a series of monthly articles “in commemoration of the 30th anniversary of the Convention on the Rights of the Child (CRC), a broad set of commitments that world leaders made to children. Jamaica ratified the CRC in 1991.”

The articles, we have been advised, “will focus on violence against children”. The rights of all must be upheld and protected for the rights of the vulnerable to be enjoyed.

We seldom think about it this way, but among the most vulnerable to violence in Jamaica are young, poor men in what we euphemistically call ‘volatile communities’. They suffer the most deaths, the most injuries, and the most attacks.

I have a suspicion that if Minister of National Security Horace Chang (who, thankfully, escaped injury in a motor vehicle accident last week) and his Government were to make the safety and security of poor male youth in volatile communities a top national-security priority, we would see crime and violence against all nose-diving before our very eyes.

Weak parenting and a culture of violence leave our children excessively exposed to harm. Broad and deep and sustained in loco parentis interventions by the State are desperately needed and an engineered culture shift in values and attitudes.

In the meantime, many more children would remain safe if more parents did what I once overheard a mother (and a church mother, at that) proudly telling her friends: “ mi a keep my pickni dem under mi crotches.”