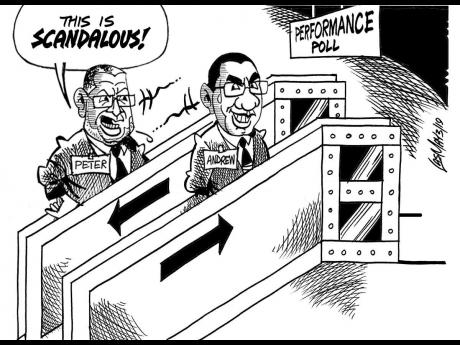 Last Wednesday morning, just before seven a.m., as I gazed at Chupski sleeping, my phone began its humming. I skipped out of bed, rushed through the bedroom door and answered it.

“Yeh, man, whole heap a dem dey yah,” the voice said while telling me that the security forces, that is, the police and soldiers, had flooded his area.

“Soon come,” I said as I pretended that I had no pleasurable alternatives.

When I arrived there in less than half an hour, it appeared to be about the usual. Making a show of force after the guns of the street had again placed the State in an embarrassing spot.

An hour later, police and soldiers were driving out of areas close to Common. Days before, a few pockets of JCF personnel had already grown used to seeing more of the people of Ackee Walk, having ‘occupied’ that community for the last week.

Those two areas along Red Hills Road and the long-term social problems associated with their economic meltdown, as the gun replaced good sense over the last 40 years, is now taken for granted by many of the residents living close to those areas.

“Why when everybody in Jamaica did fraid a di name Tivoli, hardly anybody a dead dung dey,” said a 50-year-old Red Hills Road street vendor to me last Thursday.

“What you think?” I asked him.

He mentioned the name of the criminal don who was supposed to exercise almost a feudal lord’s power over the area but who had long found it safe to migrate to Canada as the hotheads tried to kill him and sent out constant messages that he should not return.

“Jamaican poor people not used to kind and gentle treatment,” he said. “Me learn one ting years ago when me dey a prison. Poor people only peaceful when dem have no ambition but always have a belly full. Poor people nowadays want tings and want status like anybody else.”

By his reasonings, the poorest people living in inner-city pockets were forced to fight their own and feed off other communities, especially those close to them, but all fighting for the same slice of the commercial pie, which constituted the fuel of the street government. Extortion.

“You can’t call my name,” said the senior police officer to me when we spoke about a week ago. “We have some of the main gang leaders locked up, and in the latest state of emergency, we are planning to nab many others. Don’t let anything fool you. as we take them out of circulation, either by arrest or by liquidating them, the murder rate will fall.”

He also told me that an increasing number of political representatives are ditching the criminal dons in the community over which they had political influence.

“I don’t know which one came first, either we the police taking out the gunmen or the politicians in power forcing the policy. All I know is, nowadays, the politician prefers to have the usual community links but without the big army of a don and his soldiers.”

It was always assumed that as long as a political party is in power, like the JLP, and insists on making foolish, unforced errors, it would always empower the opposition, like the PNP. That does not seem to be happening, as the JLP has somehow reached an inflection point that is making it survive in spite of the negatives seemingly of its own making.

On that basis, and knowing not what plans it has for a negative change in political graph, I figure that Andrew Holness will eventually time the next election when two matters coincide: the breaking of the water supply drought and increased flow in the pipes nationally, alongside the completion of the urban road works infrastructure and a new launch of new highways.

“It doesn’t matter,” said a well-known businessman and a reliable funder of both political parties but with a funding bias to the JLP. “Positive things are happening now, and most of my buddies are full of confidence, even those who don’t too care about the details of our politics.”

He went on to explain that even a seat like Central Kingston could be in play for the JLP at the next elections. “I see more than a little bit of 1980 coming back but with none of the murderous violence of that year,” he said.

THE PNP MAY HAVE ALREADY BOWED WITH PETER

There has been a view held by some of the younger minds in the Opposition PNP that the party needs more of a whipping at the next elections than it needs a close win.

“This is based on my view for how I see things in the west,” said the well known, outspoken PNP MP who preferred this time around to be anonymous. “The only seats that I see safe for the PNP are the solidly garrisonised ones. As long as Peter Phillips remains the leader and he keeps up his uninspiring leadership, we are toast.”

According to him, the PNP only has a 20 per cent chance of a close win at the next elections. “It is up to people like you, Mark, to get the message out there that our delegates are still fiercely loyal to the party, but they are pissed at the weak and uninspiring leadership of Peter Phillips. These are people who were not all that impressed by PJ but respected him.

“Now with Peter Phillips, they still respect him, but they are praying hard for him to go. And they are not prepared to work their butts off for the party for the next elections where they can smell a JLP victory from every community in the west and through central Jamaica and in St Andrew. Help us to get the message out there because when someone like me talk at area meetings, they arrange for internal heckling.”

BUILDING UP THE PNP FOR DEMOCRACY’S SAKE

He is a comrade and although he lives abroad, he knows many of the friends of his generation who make it a habit to return and vote for the PNP. But he is not impressed by the new youth leadership he sees in the party.

He says, “I read your Gleaner column of May 23. As to Ms Tomlinson, all of us at any age make mistakes. In our youth, we may make a few more as you rightly pointed out. She deserves the benefit of the doubt. But I remember a young Portia Simpson, being in the PNP youth arm and making irresponsible and rash statements, and she, sadly, went on to be a ‘dud’ of a PM. She never really tried to learn from her foolish behaviour of the 1970s. While she became more amicable and loving, she still held stupid ideas and did not mature in her thinking and intellect.

“I know Ms Tomlinson is more educated, and with that, I hope she will be different. With social media today, it is easy to say anything, especially mean and unkind things. it is as easy as typing and sending or posting. Now, I wonder if the comrade leader, Dr Phillips, spoke to her and perhaps shared some wisdom and leadership with her.”

Way back in the late 1990s, I met a set of young politicians who were being groomed by Eddie Seaga. They were David Panton, Ian Hayles, and a youngster named Andrew Holness. Plus a few others.

Seaga impressed upon me the financial rigors of representative politics and how he tried to send a strong a direct message to the youngsters to get their finances together before they really ventured out. Does that still matter today?