Gordon Robinson | What has Bunting done to help PNP? 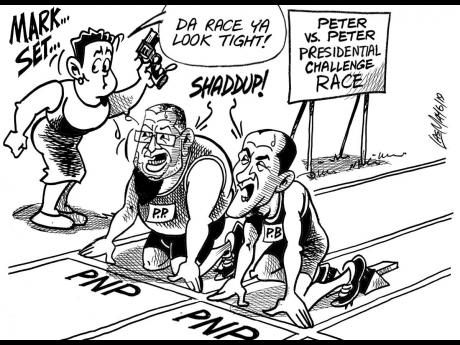 Readers should know it’s my opinion that there’s no democracy in Jamaican politics.

I’ve tried to point out that we’ve no say in government’s composition or modus operandi despite the sham called “elections”. In a March 3, 2019, column headlined ‘Time to Abolish Jamaica’s Electoral College’, I explained that there’s little difference between how USA presidents or Jamaican PMs are “elected”:

“Did you feel abused when in 1989, Jamaica used its limited plebiscite to ‘vote for’ Michael Manley but, later, PNP delegates chose P.J. for us?

Did you feel violated when Jamaica ‘voted for’ P.J. Patterson in 2003, but 1,700 PNP delegates forced Jamaica to accept Portia?

How’d you feel when Jamaica ‘voted for’ Bruce Golding in 2007 but 30-odd MPs forced us to call Andrew Holness PM?

I realised my ‘vote’ was a farce.”

At least in the USA, all party members get to vote for their party’s presidential candidate. Not so here,where hundreds of thousands of PNP/JLP members are denied any vote. Imaginary “delegates” created at the whim and fancy of party higher-ups pick their leaders for them.

This is why media hype surrounding Peter Bunting’s (PB) declared anxiety to unseat PNP leader (PDP) after less than two years at the helm leaves me colder than a witch’s tit. Furthermore, “Comrades” equally anxious to limit further damage to PNP credibility, touting the challenge as proof of PNP “democracy”, have me in stitches. Less than 3,500 “delegates” qualifications unknown will exercise a million members’ democratic right. Based on what?

But it don’t sing and dance

and it don’t walk.

And, long as I can have you

I’d much rather be

This is another political charade where personal ambition “Trumps” national interest. Jamaica’s national interest, taking today’s pretence at democracy as given, is to ensure that no government can take political success for granted. So why initiate an unavoidably divisive leadership contest a year before anticipated elections (which can be called at the snap of the PM’s fingers) on:

“… a growing ‘acceptance/resignation’ in the public domain and among various stakeholder groups, including party members and supporters, civil-society and private-sector leaders, ‘that the PNP, under Dr Peter Phillips’ leadership, cannot defeat the JLP in a general election’” ( Gleaner)?

Obviously, PB’s crystal ball has told him that the PNP is incapable of winning an election unless HE’s leader? Really? Seriously? Would such a narcissistic, politically dim-witted opinion be justification for initiating party division (thus further weakening electoral chances) within shades of that same election?

Why not allow PDP to complete the party-renewal job and see what happens before engaging in this very male dysfunction of premature adjudication? Why should PDP’s tenure be cut so unceremoniously short based on fortune-telling? How does it help long-term national interest for a national leader who hasn’t lost a general election to be deposed in this undemocratic way? Churchill, May, and Simpson Miller all lost general elections before party leadership. What’s your rush?

According to PB, PNP’s 2016 appraisal report blamed election defeat on arrogance, poor messaging, breakdown in trust among leadership, and an unready election machinery. Apparently, PB blames all these on PDP. But:

1. PNP 2016 leader was Portia Simpson Miller, NOT PDP. As campaign manager, Phillips must accept some blame for campaign messaging, but I’m sure he didn’t have the last word. PDP, the most effective finance minister in recent memory, can’t be blamed for Government’s failings causing electoral defeat. Maybe if a certain national security minister didn’t have to ask God to do his job for him, JLP couldn’t have won power on a facile promise that we could keep windows and doors open;

2. Portia, a PNP PM who actually lost a general election, stepped aside long after the report was available. PB, fully aware of its contents, initially said he’d challenge then vacillated and left PDP unopposed.

At that time, PB said:

Political parties are national organisations, and I believe leadership decisions should be made on a wider set of considerations. Nevertheless, in the face of this strong sentiment, it would be irresponsible to cause the party to expend resources and divert our focus and energy at this time. Therefore, I’ll not be going forward in this contest.”

What are the “wider considerations” now? Why is NOW the time to expend party resources and divert party focus and energy? Not simply YOUR ambition? Right, PB?

In announcing (2019) that the wrong Peter is leading, PB said:

“Our performance in East Portland confirmed there has been no demonstrable improvement to the areas recognised as deficient and contributing to our electoral defeat in the 2016 appraisal report.”

Clarteetus (that’s Latin for you know what)! Is that what East Portland was about? It had NOTHING to do with Government targeting a constituency using concentrated government resources and backing a popular constituency resident opposed, from necessity, by a parachuted candidate who managed to record over a thousand more votes than his popular predecessor and lose narrowly? Surely you jest?

Which opposition party YOU know, starting where PNP did in 2017, could’ve survived two sudden MP deaths in two years against the full might of Government focused in small geographical areas? C’mon, man! At least try to be less transparent.

It gets worse. PB relies on this convenient truth:

“Any objective analysis … . will show there has been further decline in PNP’s electoral competitiveness since 2016”

And? So what? Has PB never heard that unexpectedly plummeting circumstances usually get worse before getting better? Was PDP expected to wave a magic wand and instantly transform electoral prospects? In. Two. Years? How’ll PB’s divisive challenge improve electoral competitiveness? ROFL (as is JLP all the way to the next election)!

In 2017, THIS is what potential PNP leadership candidate PB said:

“Peter Phillips has made, and continues to make, an outstanding contribution to [Jamaica], and he’ll have my support when he becomes next [PNP] president … . I’ll offer to work on areas of weakness within the party that have been identified in various reports since February and specifically on: i) helping [PNP] to effectively engage a wider range of supporters; and ii) strengthening the internal framework for integrity and accountability.”

PB, I’ve two questions for you:

(1) WHAT EXACTLY have you done to help PNP “engage a wider range of supporters”? You’ve done a lot of yelling and screaming about corruption, but, according to you, this hasn’t stemmed what YOU call “further decline in the PNP’s electoral competitiveness since 2016”. Do you believe YOU bear any responsibility for that decline, or is it all PDP’s fault?

(2) WHAT EXACTLY have you done to ensure “strengthening [PNP] internal framework for integrity and accountability”? WHAT SPECIFIC WEAKNESSES DID YOU SEE THEN? What’d you do to identify/eliminate them? Did you advocate internally for full disclosure on Trafigura, or were you content to publicly shout “corruption” about today’s Petrojam?

PB, you accuse PDP of “since becoming [PNP] president, he hasn’t implemented a single transformational initiative within the party and is not seen as the right person for this time”. So, what’ve YOU done to transform the PNP? Or is that PDP’s chore alone? It appears obvious that you equate your replacing PDP as party leader to PNP transformation? DWL! On the other hand, based on public performance, PDP’s efforts at transformation include introducing new blood at all levels while keeping the wisdom of experience to guide even the most headstrong new bloods. Yet, sounding like Harold Brady at the Manatt enquiry, you say “Not one, sah”? Clarteetus Bartlomeetus! Are you high?

As a teenager, one of my favourites was Neil Diamond, who, unfortunately, recently retired from live performances due to Parkinson’s. His superlative songwriting skills began in Tin Pan Alley and evolved through Rock and Roll to excel in every evolving genre. He’s simply phenomenal. Forever in Blue Jeans, co-written in 1979 by Diamond and his guitarist, Richard Bennett, is a song promoting eternal philosophical truth that the simple things are the best things.

But it ain’t nothin’ next to baby’s treat

And if you pardon me

Unlike some in media who’ve already begun campaigning for the challenger and seem to already know the outcome, I’ve no idea who’ll win this challenge. As I did successfully with the 2016 Jamaican elections, both by-elections since, 2016 USA presidential elections, and the most recent challenge issued on a June 8 (by Theresa May), I’ll publish my prediction closer to the actual “vote”.

I know who I think deserves to win, and it’s not PB. But as donkey sey, “Di worl’ no lebel”, so we wait and see.