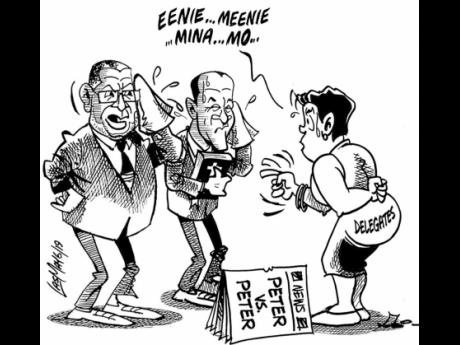 In 2006, on the eve of the vote in a special election to decide the new People’s National Party (PNP) president and prime minister, outgoing PNP president PJ Patterson said that Portia Simpson Miller was not just the hope of the PNP, but “the only hope”.

At that time, the wily politician PJ had sensed the increased waning of the PNP’s electoral chances and he was taking no chances on others like Dr Peter Phillips snatching the victory in the internal race but leading the party to defeat against a Jamaica Labour Party (JLP), whose viability was on a positive trajectory with the return of Bruce Golding.

Let no one fool you. Internal elections are filled with open and suppressed acrimony. It matters little how many codes of conduct are drafted and sworn to. At some point, those in the forefront will choose words that will hit much harder than physical blows.

It is easier if the party has governmental power. Once the election is out of the way, it is much easier for the former protagonists to come back together on the common cause of holding and maintaining governmental power. That’s a sweet and healthy place for a political party to be simply because it is at the highest level of its objective. It holds the nation’s purse.

For a party in opposition, like where the PNP has now found itself, at the end of internal elections, the wounds from the contest carry over and the factions remain because the party is in its saddest state – not having power and growing increasingly less popular. Those negatives feed on themselves, and it becomes significantly harder to avoid viewing the leader as the fly in the ointment.

Dr Peter Phillips knows that he is unpopular, but at this stage of his political career, where he has never led the PNP to a victory and has had himself called prime minister, he has no other choice but to convince himself that there is that one last hurrah in him.

After a political career of being de facto PM while he had to walk behind and in the shadow of Portia, after being one of the most effective ministers in numerous portfolios and especially after being a key cross-party transitional minister in marshaling IMF programmes towards Jamaica’s upward economic tilt, Peter Phillips is currently imperiled by storm winds of a history that may prove quite unkind to him.

He cannot afford to step away. He cannot afford to be beaten, flogged, or pipped in a leadership contest, and, although he knows that he is weighing down the party, he is prepared to hold on and to drag down the PNP to another general election loss likely to be held in about mid-2020.

Dr Peter Phillips is in about the worst place that a politician can be. Numerous polls are indicating that he is electorally unviable, and at the same time, he is being forced to hold on in a futile effort and a hope that the politically improbable will write him a history that is in a sprint towards the horizon. New track shoes and multiple sessions in the gym will not assist the embattled Peter Phillips in reversing that history that is playing out right now.

The very fact that Dr Peter Phillips is fighting tooth and nail to move to a special election and not have the contest in September is more than vivid proof that he knows that his base among PNP delegates may be shaky. He simply cannot allow his challenger, Bunting, any time to network and grow his delegate support.

At the same time, although the PNP, the JLP, pollsters, and significant swathes of Jamaicans of voting age know that Peter Phillips is less popular than his party and is not seen as having even that merest touch of political magic to lead the PNP to an election victory, it is also up to Peter Bunting to convince the many that will be watching this contest that he is in possession of the very qualifying elements that Phillips currently lacks.

One day last week, I asked a PNP MP supporting Peter Bunting if it was likely that MPs openly willing to throw their support behind Peter Phillips could surreptitiously get their delegates to support Bunting.

“It can happen,” he said. “The ideal is to have the MP, councillors, and those with the leadership of a constituency all on the same page, moving forward in a campaign. The bigger problem Phillips is faced with is that he’s not good at winning internal elections because he is not naturally likeable.

“His support shifts on him like quicksand. That happened in the two contests involving Portia. The Executive meeting that he went to on Monday night to place the resolution for an early conference failed because his own executive turned him down, and he’s not a happy man right now.”

“Tell me about Bunting’s showing in the polls,” I asked another MP who is in Bunting’s corner.

“Comrade Bunting intends to campaign and use that time to build his fitness campaign. You are the one who told me that opinion polls place candidates who have not expressed interest in leadership positions at a disadvantage.”

Peter Bunting owes it to himself over the next few months to build a public case for his challenge. The most popular person in the PNP at this time is Damion Crawford. And isn’t it ironic that the very man who holds that pride of place does not have a parliamentary seat. That is, of course, due to Crawford’s political indiscipline and his insistence in telling the broader constituency of PNP supporters more of what they need to know and less of the political claptrap they desire to hear.

Nothing ages a man more than the unrelenting press of generational poverty. Which is why a 69-year-old politician is likely to be a much healthier person than a 65-year-old man living on Gully Bank.

The politicians can afford first-class healthcare while the poor man will see his sight go to blindness while in the long line waiting on an optical procedure at KPH. Politicians eat white-flour dumplings by choice; the poor man has the gluten-filled, artery-popping food out of pricing and necessity.

The PNP’s Damion Crawford is right that the JLP has more than its fair share of those in the Methuselah class, but he has forgotten that the poor constituent cannot afford the supplemental vitamins and minerals that Noah’s cousins in the political class stock on a monthly basis.

The JLP has the political advantage in that its leader, Andrew Holness, is young and seemingly fit, and his age is the perfect foil for the oldster class in the JLP Cabinet.

In the PNP, the reverse is true. It is led by a 69-year-old leader who has an admirable class of young people who will be ready to take over from him when Noah is ready to float again in Noah 2.0.

Peter Bunting is very fit at 56, and in the same comparison, he looks much better that a 46-year-old man tiefing light in a zinc-fence lane. Bunting releasing his fitness video clips not only shows up the age gap between his leader and him, it shows us a regime that the hapless voter can only dream of.