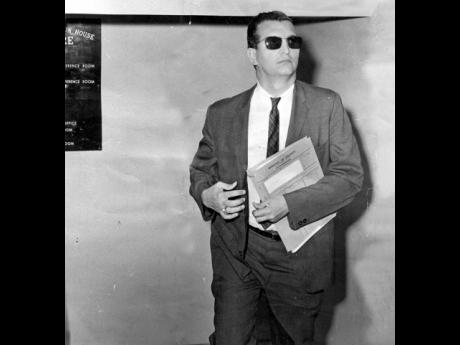 Gleaner photograph
Edward Seaga revelled in his role as the ‘One Don’ of the Jamaica Labour Party.

I write to contest positions taken by my friend, Delano Franklyn, in his article, ‘Seaga: the good, the bad and the ugly’ ( Sunday Gleaner, June 30, 2019). He suggests (i) that Edward Seaga cannot be a hero because he was disliked by the people, the proof being his loss of five elections; (ii) that he has a lot to answer for because of the CIA involvement in the 1980 election; (iii) that he was known to associate with gunmen and to impede the security forces.

I take issue also with Dian Austin-Broos, writing from Australia to accuse me of besmirching the name of former PNP vice-president Wills O. Isaacs. She asserts or implies (i) that the infamous Gordon Town Riot developed after an altercation there between Manley and Bustamante; (ii) that political garrisons and gang warfare only began after the construction of urban high-rises in the 1960s; (iii) that there was good cause to try Bustamante for manslaughter in 1946; and (iv) that the JLP knew about the bombing of the tramcar in Kingston in 1948.

Delano suggests that the loss of five elections should bar Seaga from heroic status. But Norman Manley lost six polls – 1944, 1949, 1958, 1961, 1962 and 1967 – and was persuaded to resign as party leader in 1969 because the PNP felt he would continue to lose elections. With all that, no one could suggest that he should not have been declared a hero.

If one follows the logic of Delano’s argument, it leads to the conclusion that had it not been for CIA involvement, the PNP would have won the 1980 election and bound the country hand and foot and handed it over to Castro and the Socialist International. That seems to have been the plan because the high-riding socialists in the ’70 were saying, “Nicaragua 1978, Grenada 1979, Jamaica 1980.”

The truth is that the CIA, although they had observers in the local US embassy as in every other, had no direct or indirect CIA involvement in our election. No such operative was ever held and charged for any offence before, during, or after the 1980 election, and Michael Manley, interviewed by Penthouse Magazine at the time, admitted that there was no such evidence. The testimony of Philip Agee, the renegade CIA agent who supported the PNP claim, cannot be taken seriously, and declassified CIA files since 2000 have shown that there had been no covert operations in Jamaica.

The appeal to the death statistics in the 1980 election (800-plus) does not help the case because we have continued to butcher each other in larger numbers outside the pale of political conflict. The food shortages were not caused by Seaga or the CIA but by Manley’s feckless management of the economy and the decimation of the tourist industry.

Of gunmen and garrisons

After the breakdown of law and order in the inner city, the country saw the emergence of community enforcers called dons; men who involved themselves in politics, community defence, and crime, independently of the political representatives who had to engage them because the MPs represent ‘the good, the bad, and the ugly’. So Seaga had his Claudius Massop, Jim Brown, and Biah Mitchell, and Manley had his Burry Boy, Feathermop, Blackatooth, and his “ paseros in the garrison ( a criminal gang).” Seaga was regularly reviled for Massop and Jim Brown but comparatively little was said about the PNP men. As to Seaga mollycoddling badmen, it was he who, in 1994, gave the police commissioner the names of men, including Dudus, whom he wanted to have arrested for criminal activity in the constituency.

It is true that he protested bitterly when a 2001 incursion by Reneto Adams killed several innocent people, but on another occasion when a host of civilians protesting brutality stoned the police station on Spanish Town Road and threatened to do worse, Seaga came on the scene and said these words: “I will always defend you when you are in the right, but I cannot uphold you when you are wrong.” He ordered them to disperse, and they left.

Even where Delano appears to give credit, he says the growth in the independence decade was “growth without equity”. This is false. Those were the years of the National Insurance Fund, the School Feeding Programme, the Assistance to Female Heads of Households, and by Carl Stone’s calculations, the quality of life of the working class, judged by access to education, employment, and other social services, improved by 50 per cent over the independence decade.

Dian Austin-Broos tells a howling falsehood when she claims that the Gordon Town Riot started as an altercation there between Bustamante and Manley. The riot broke early in the day after Isaacs had trucked #69 up to Gordon Town to attack defenceless Labourites. Bustmante and Manley both drove to the scene afterwards; Manley to cheers and Bustamante to threats and jeers. Arthur ‘Crank Handle’ Leon had to pull his gun when hostile PNP activists tried to pull him from his car and Shearer had to do the same thing. Anyone who wants the truth just needs to read The Gleaner Archives - Gordon Town Riot, August 1949. Shame on you, Ms Austin-Broos, for hiding behind your credentials. She is not telling the truth either when she says that gang warfare began only after the building of high-rises in the inner city.

To show how the JLP was vile in the time of Isaacs, Austin-Broos mentions that Bustamante was charged with manslaughter arising out of the death of John Nicholas in the course of the strike by members of the Mental Hospital Workers’ Union (MHWU) at Bellevue in 1946. She would have readers believe that Busta was the villain. What he had done, after informing the governor in advance, was to lead a group of volunteers, escorted by his dockworkers, to render assistance to the inmates after the striking workers had, while the police stood by, held the gates against army cooks and the Sisters of Charity, who had tried to render assistance to the abandoned inmates.

He did not have to force the gates because when the picketers heard that Busta was coming with his dockers, they fled. While he was still on the premises, a confrontation developed at the gate between a BITU delegate Clifford Reid and a PNP activist and mechanic, John Nicholas, who, having no business there, came on the scene with a gun to join the large group of onlookers. Reid threw a brick at Nicholas, who shot Reid dead and was himself beaten to death by members of the crowd.

Bustamante emerged, took control of the situation, told the crowd to move away from the body and to obey the police. He was charged with manslaughter on false testimony from two MHWU members, but was acquitted.