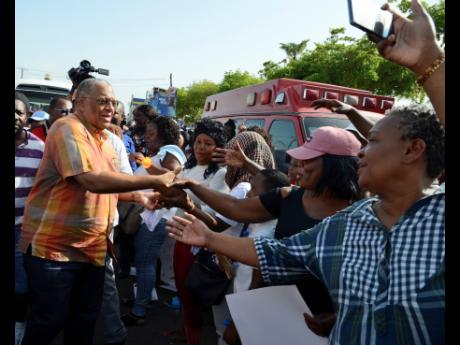 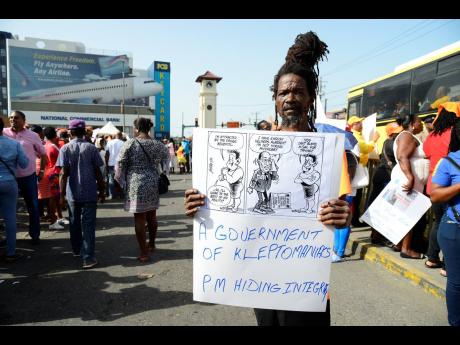 Last Thursday, those who consider themselves the brightest minds in the PNP decided that a demonstration in Half-Way Tree against what the party saw as the JLP administration’s corrupt governance in many areas was exactly what the nation needed.

In truth, it was all about political cheating and the desperation of the Peter Phillips leadership team to outflank or show up the Rise United Bunting faction, which had no presence, besides Ronald Thwaites, in the St Andrew capital.

I use the term ‘political cheating’ because that is exactly what the Peter Phillips faction did. I was told that it was just the night before the Thursday gathering that official contact was made with the Buntingites, inviting them to the event. Smelling the rat, they made other decisions, none of which included taking a trip through Half-Way Tree.

Some will tell you that corruption contests between the PNP and JLP when either of them form the government would hand the winner’s sordid medal to the PNP. But it should not have to come down to that if sensible and thinking people in this nation are really prepared to accept governmental corruption for what it is: stealing the people’s money and setting back the country in underdevelopment.

PNP and JLP administrations have wallowed in that, but as I have said before, the records will show that the PNP ought never to show its face in such a competition.

“A few nights ago, a well-known PNP badman from Kingston showed up at PNP HQ, and it was designed to intimidate. It was not an up-in-your face situation,” said one source to me.

“What he would do is call a man over and talk to him,” the source said.

“The anti-corruption meeting said to be a PNP Youth Organisation event, said to be a PNP Region Three event, can never be considered a fully PNP event. It was purely done on behalf of, and in concert with, the Phillips faction in an attempt to show up the Bunting Rise United Team,” said a PNP MP fully in Bunting’s corner.

Based on all of that, how can the public ever again trust what comes out of Peter Phillips’ mouth?

To paraphrase Malcolm X, the people were had, took and were totally hoodwinked. How is it that the Peter Phillips team can allow itself to be cast in the ‘oneness’ of the PNP when Thursday’s spectacle was, in strategy, designed to show up the faults of Bunting, but somehow it brought about the inability of the party leader to forge real PNP unity?

It is still early days yet, but by my count, I suspect who has most of the delegates and it is not someone named Phillips. People close to the Bunting team have been telling me that recent polls have been showing Bunting leading the race. I have requested copies of those polls but so far, I have not had any success.

In internal political elections, there are always party promoters who operate behind the scenes to ensure that key businessmen and those high earners outside the law funnel money to enhance the lives of delegates just as long as the campaign lasts.

Leader of the Opposition Dr Peter Phillips is, of course, dead right that he is not in the business of writing cheques to buy voters. But the key question is this: If both Dr Peter Phillips and Peter Bunting found out separately that there were heavy-pocketed dons forking out money in direct efforts to influencing delegate votes, how loudly would they respond?

Which would be the first one to shout it out to the public and declare that the delegates being offered money on his behalf should reject it? I know the answer.

Dr Peter Phillips is not a wealthy man, but I have reason to believe that he lives well, eats well, and sleeps well at nights – that is, after that candid conversation with that pesky person always in his mirror.

Peter Bunting is filthy rich, as most of us wish we could be, so on that basis, I am likely to believe that he has more lobster than callaloo for meals. Politicians, however, are high-ego people, and most of the ones I know are pretty bright.

In the present PNP contest, I claim no close relationship with either of the Peters but must say that in every attempt to draw out a reason to show a Phillips win, I am constantly pulling a blank card.

“Most of the regions are showing us in terms of delegate votes that we are on the way to winning,” said an MP who is a Bunting supporter.

“When we launch on Sunday (today), we will be taking out 15,000 PNP supporters,” said the MP. “We will be doing that not just for show, but to demonstrate how organised we are and how effective we can bring about life to a campaign,” he said.

“I can feel the win already, Mark, but we are just ready to work,” he said.

Last Sunday, in the wake of Supreme Venture’s celebration of 18 years of operation, I wrote a light-hearted piece about a lady I had met in a bar just at the start of Cash Pot and how she was overjoyed after winning a few thousand dollars.

A reader emailed me, requested my phone number, and then spoke with me. To him, I was underplaying the real efforts of the company. Then he sent me some added information.

“It may not be known by many, but Supreme Ventures has maintained strong relationships with children’s homes across the island, especially the Walker’s Place of Safety. So when the Lyndhurst Crescent-based home was gutted by fire in 2018, it was the Supreme Ventures family which stepped in. The company gave $10 million to that worthy cause of rebuilding the facility.”

The level of volunteerism, coastal day clean-ups, assistance to Hear the Children’s Cry, and many other efforts that would be considered worthy of good corporate citizenship are too many for me to write about in this restricted space.

In terms of taxes, Supreme Ventures pays over $17 billion per year. It is certainly no surprise to me that it is a woman, Ann-Dawn Young Sang, who heads the company, which, since its inception 18 years ago, has contributed well over $43 billion to other stakeholders, including prizes paid to bettors, customers, and other retailers.

I know, of course, that after 18 years, not many companies have the ability to reinvent themselves. “The thing you got lost in your Sunday piece is that there is a new and younger set of business persons like Gary Peart, who is the present chairman of Supreme Ventures, and you gave the impression that the original team of 18 years ago is still in place,” said the man, who admitted that he is not just an ardent gamer, but is close to the company.

I may not personally be a gambler, but any company like Supreme Ventures that supports the teaching of robotics to numerous primary-school students, especially in a time when this country is way behind in STEM knowledge, will have my support.

I must confess that I still go to bars and hear the chatter, and I know that once the television is showing the latest draw and the numbers are about to be read out or announced, Jamaica pauses for a moment and then explodes. Either in exultation or disappointment.

The quiet one who walks away without saying anything is the one who connected big.