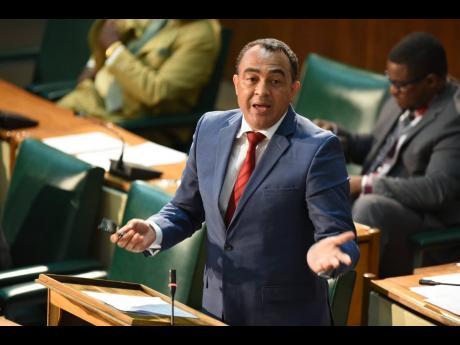 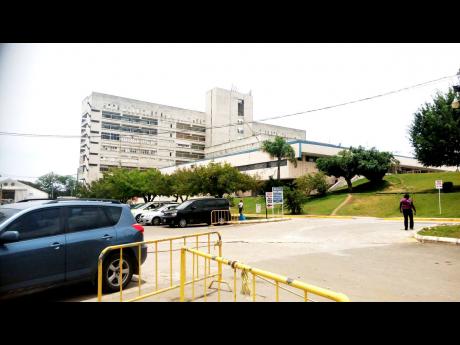 At the time, the government pretended only simplistic “renovations” were needed. JLP sycophants (especially on social media) leapt to their political cult’s defence, accusing me, inter alia, of having a “vendetta” against Chris Tufton, a man I don’t know and have never met.

Eighteen months later, we’re no closer to anything remotely resembling a remedy. So, let’s begin with a recap:

In May 2017, Health Minister Tufton addressed CRH staff and announced project management contracts to be procured for “assessment” of “infrastructure” and “process flow” and to “establish a new ventilation system”.

“We’re on track with the renovations. We did say ...we’d have most of the issues solved by the first quarter of next year ... . I would think most of the issues would be dealt with and the facility back up and running by [then] ... .”

Apparently, it was a simple air-conditioning vents problem that would be corrected by March 2018. On May 6, 2018, ( Cornwall sick of Tufton) I exposed that the Health Ministry [MOH] KNEW that the problem wasn’t ventilation, but mould. Ventilation systems’ contribution was to spread the mould.

“But complaints increased. In September 2016, seventeen of 21 staffers seen at A&E manifested symptoms linked to indoor air-quality issues. Espino’s [a PAHO/WHO consultant quoted by MOH] report notes: ‘Recommendations were made for isolation and decontamination of affected areas, but there was an escalation of symptoms after the intervention. Several floors were affected.’

“Suspicion regarding air conditioning was proven fallacious when a third incident occurred while attempting to clean air ducts: ‘The contractor brushed the glass fibre ducts, dumping dust and fungus spores in the interior of the duct along with glass fibres.’”

All this information was known to the MOH from 2016!

Other forms of mould were found, but today, I’ll concentrate on Strachybotrys, one of the most poisonous of moulds. Forensic medicine experts have reported that it is a toxic mould that is harmless once dry. But when the spores get wet (for example, from leaky roofs) or remain in any dark, moist environment or near paper products (like dry wall), they produce poisonous microtoxins that attach to the spores’ surface and are inhaled with the spores.

We’re still waiting for CRH “renovations” to be completed and a report from indoor air-quality experts that the threat from the deadly Strachybotrys has ended.

While we wait, I’ll tell you the story of a young Texas couple, Melinda and Ron Ballard, who had everything – successful careers; money; time to enjoy it; and a home fit for a movie star (a Georgian-style mansion on 72 acres). You can read their story on the internet by googling their names.

Suddenly, and initially, inexplicably, everything changed. Their three-year-old son, Reese, developed respiratory problems. Ron started showing signs of Alzheimer’s. They were befuddled. Their doctors tested for allergies (including a pin-prick test for mould allergy), with negative results. A leaky fridge had damaged their floor, but they “fixed” it as an ordinary plumbing problem.

One day, by accident, on a plane, Melinda was seated beside an indoor air-quality expert who saw her coughing small amounts of blood into her handkerchief. He started a conversation with her and eventually warned her that it looked to him like mould poisoning, not allergy. Based on her doctors’ advice, she dismissed him at first, but as her husband’s and son’s symptoms worsened, she called him in.

After forensic tests, the culprit was identified. It was Strachybotrys. The remedial process is expensive. Delays caused by insurance companies’ reluctance to pay allowed the infestation to spread until, like a horror movie’s smoke monster, it ate their home.

Eventually, the family was advised to abandon home and avoid cross-contamination by taking nothing with them.

The only way to “remove” Strachybotrys is to dismantle the infected areas of the building piece by piece, seal them in plastic bags, and cart them away. Removing the spores alone only spreads the contamination.

Remember the MOH being told how the infection spread from one to three floors and “a third incident occurred while attempting to clean air ducts: ‘The contractor brushed the glass fibre ducts, dumping dust and fungus spores in the interior of the duct along with glass fibres’?

Strachybotrys can’t be scraped or cleaned off. The infected building parts must be removed entirely.

Eventually, Melinda could only enter her old home wearing a Hazmat suit. Meanwhile, insurers offered 20 per cent of the original US$1 million repair estimate. The insurance dispute dragged on for two years, by which time experts concluded that the house was so contaminated it was beyond repair.

Ron lost his job due to memory lapses; tended to wander off and get lost; and still needs memory aides, including a notebook with his phone number written in it. He often forgot his son’s name.

Experts recommended the home be demolished. Ron and Melinda sued their insurer for US$6 million, the value of their lost home. A jury awarded them US$32 million.

WHAT IS BEING DONE?

Minister Tufton was reported recently asking for patience because of the complexity of the work. Patience for what? Is the Government acknowledging that the root of the problem lies in mould? Does the Government admit that CRH’s “open” construction, which allows the spores in from outside and then feeds them with damp, is the crime’s main accessory? Is the Government acknowledging that Strachybotrys can’t be removed without removing infected building sections or demolishing an irretrievably infected building? What steps are being taken during “renovations” to avoid cross-contamination?

Meanwhile, how many people, including hospital staff, have been poisoned by this sick building? How many cases of respiratory disease, or worse, are known to the Government? Is there a programme to follow up the affected or infected and treat them without charge?

Will Government release details of any contracts awarded for “repair”? Who, and with what expertise, is contracted to repel the mould attacks on the CRH, where infection has spread for 40 years? What are the scope, method, and objective of the works?

Three years later, we’re still only “set to intensify”? “Plans” don’t include a word in English about mould.

Tufton: “Over the last few years, we have assessed and determined on a work programme to rehabilitate the Cornwall Regional Hospital that will see the roof being repaired to solve the leaking problem. A $100-million contract has been signed, and work is about to commence to start that process.”

YEARS to “assess and determine a work programme”?

Repairing a leaky roof to cure mould infection is like repairing a leaky fridge. Without more, you’re repeating the Ballards’ error! Their excuse is that they didn’t know. What’s yours?

On March 23, The Gleaner reported Chris Tufton as saying: “...I think we are working according to schedule, based on what the folks on the ground have told me.”

Well, goody gumdrops. “Folks on the ground” must know.

The Gleaner report, which included an oversight body’s estimated completion date of November 2019, continued: “Scope of work to be done includes replacement of plumbing and electrical fittings and a complete rehabilitation of the 10-storey building’s roof, along with replacement of the ventilation system.”

Not a word about mould removal; future mould infestation prevention; or addressing the architectural guarantee of the Stachybotrys monster’s return, even if the removal of those pesky spores are a secret part of the scope of works. Instead, we’re content to make the ventilation system more efficient in spreading mould.

As usual, we enjoy going round and round the Mulberry bush, chasing political weasels, hoping they’ll go “ pop!”?