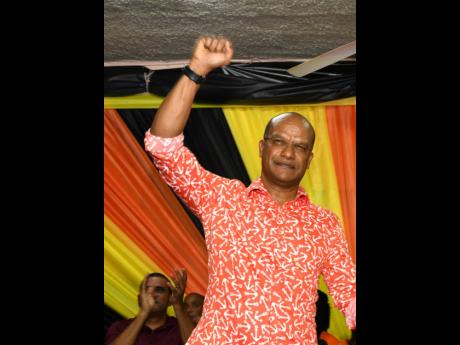 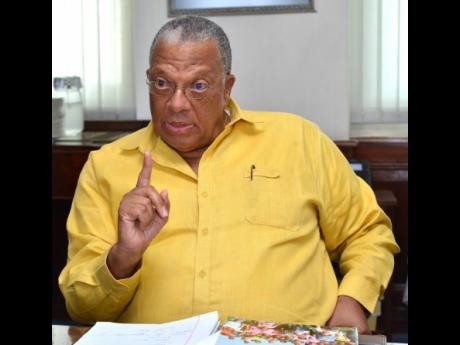 Peter Bunting could be in trouble in his September 7 quest to topple Dr Peter Phillips and become the new PNP president.

I say that mainly for two reasons. At the official launch of his Rise United campaign exactly one week ago, the venue was packed with mostly young people. I doubt if as many as five of them were PNP delegates. Where were they manufactured, and why did they show up? Was it for the carnival directed by the stage presenters, or was it for the food and drinks?

I am not in the least trying to bring denigration down on young people, but I know how politics operates. That crowd was Bunting’s hologram, designed to show how much young people love him, but conversely, how easy it is to switch off the electronics generating the image. He was trying to walk into Andrew Holness’s territory but was making the critical error of playing to the wrong crowd at the wrong time.

“We ought to be honest. Both sides have been relentlessly hammering each other, so there is enough anger and tension to share in the two campaigns,” said a JLP MP to me last Thursday.

Bunting seems to be following the Audley Shaw play book when he made his failed attempt to displace Andrew Holness a few years ago. In prized interviews with top journalists Cliff Hughes and Franklin McKnight, Bunting said that one of his objectives as the new leader would be to overhaul the officer corps. Has he properly thought that one through and through? Does he not know that he needs to move closer and strategically appeal to those making up the party executive instead of threatening their tenure?

Bunting supporter Ian Hayles, Western Hanover MP, is ever the open optimist in terms of Bunting’s potential as PNP leader. At the official launch of the Rise United campaign, Hayles showed up with a Bible and declared that he had been baptised. Last Wednesday, I sent him a text.

Party politics, subjective view of electoral strength, and voter choice have never plotted well on a straight-line graph. Last week, the Rise United Team was threatening to be a juggernaut. Now, it may need more than a Bible thumper to rejig the engine.

All polls in the last year have indicated Andrew Holness, the PM, way out in front; his party, the JLP second; the PNP third and its leader, Dr Peter Phillips, struggling at the rear of the pack when the only place that matters is first.

In terms of popularity inside the PNP, the feisty and independent PNP maverick Senator Damion Crawford stands out in front, and PNP President Dr Peter Phillips occupies the second spot. The last number I saw for Peter Bunting was three per cent.

Both Bunting and Crawford have expressed their desire to one day lead the PNP, but only Bunting has brought that desire forward with an open challenge. What is it that poll respondents are seeing in Crawford that they are not seeing in Phillips? And in Bunting?

To be fair to Bunting, numbers in polls that seek hypotheticals usually do not capture the best comparison when one person has not declared. For example, if a question should be asked, Which person in the PNP do you believe would do the best job as PNP leader? “there is likely to be one number if no contest is on and a divergent one in the open season of an active campaign.

‘What we need to see from Bunting is a new poll showing him running not just ahead of Peter Phillips, but outpacing Crawford (not a likely prospect at this time),” said an MP who is a strong supporter of Peter Phillips.

‘He cannot show you those polls either because they do not exist or they are too embarrassing. And remember now, that is what he needs to show the delegate body as a part of trying to convince them to support him. There is no guarantee that delegate sentiment and public sentiment will be on the same page,’ he said.

I firmly believe that a weak PNP does a disservice to the nation and to the ruling JLP administration. It cripples the nation by not mounting effective opposition and oversight especially in areas of ministries prone to corruption and wild spending. A weak Opposition PNP also impels the JLP administration towards laziness and policy burnout.

For that reason I support the Bunting challenge not because Bunting is the ideal candidate, but more because of the inability of Phillips to tick over the meter in favourable-opinion polling.

A few months ago, the big political talk inside the JLP was ‘ please keep Peter Phillips as PNP leader.’ According to all JLP insiders I spoke with at the time, just as how P.J. Patterson had his easy way picking off Seaga at multiple elections, so was Peter Phillips proving to be the PNP’s albatross that would allow Holness to see Phillips as easy pickings time after time, especially when Holness was already ahead in the time game.

That calculation in the JLP is now occupying a different slot. “Reason with mi,” said a JLP MP of a St Andrew constituency. “Although I know we would not have too much to worry about with Phillips, Bunting wants to upset the structure of the PNP. If he wins and does that, he would present us with a PNP lacking the cohesion needed to take a party through a hectic campaign for elections.

“I hate to say, it but I am a politician, and that suits us even better. Plus, we have seen some tightening up of the PNP around Phillips.’

“So which person is the easier prospect?” I asked. “Phillips or Bunting?”

‘We know we have Phillips’s ticket, but we would dearly welcome a Bunting and a fractured PNP.’

Where are the two schools, Minister?

The man from North West St Ann wrote me last week. “I am a retired education officer and am deeply distressed about the matter of the shortage of secondary – school places in the constituency.

“Plans were advanced 10 years ago for the building of two 1,500-seat high schools – one in Discovery Bay and another in Bamboo in the constituency of MP Dr Dayton Campbell. Today, I am more than disappointed because a small (100 student) Discovery Bay high school was declared open a week ago, with the apparent approval of the MP, which I find hypocritical in the face of assertions by the PNP of their plans to fix education.”

According to the gentleman when we spoke by phone last Thursday, “This is like a doctor giving the patient a band-aid when the patient needs open-heart surgery.”

- Email feedback to columns@gleanerjm.com and mawigsr@gmail.com