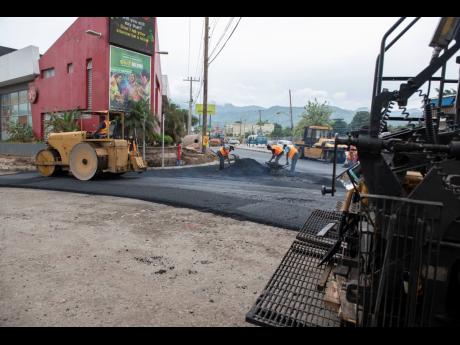 File
Men labouring on the resurfacing of Constant Spring Road, St Andrew earlier this month. It forms part of the legacy project roadwork which began in 2018 and is slated to be completed later this year.

The short answer to the interrogative headline of the Gleaner editorial published on Friday, July 5, 2019, 'Who's monitoring the road projects?', is 'We are.'

The National Works Agency (NWA) is one of a number of government bodies with oversight responsibility for various aspects of the implementation of the ongoing major-road construction projects in the Corporate Area and Westmoreland.

The six Legacy roadwork projects under the Major Infrastructure Development Programme (MIDP) are being monitored and managed by the NWA on behalf of the Ministry of Economic Growth and Job Creation. However, a more detailed answer to the question would be, ‘We are, but the projects’ progress cannot be measured only by current physical completion.’

The MIDP is so far 80 per cent completed overall, including both physical and ancillary works. This figure does not include Marcus Garvey Drive, which, after all, was completed under the same programme almost a year ago and officially put into service in October 2018. Based on the findings of independent studies, the newly constructed 2.4-kilometre roadway has benefited all categories of road users from an operational and economic standpoint.

Phases one and two of the Barbican Road project are 99 per cent complete. The project extends south from Barbican Square to a section of East Kings House Road, east to Jacks Hill Road and west to Garth Road, accounting for over 1.3 kilometres of newly reconstructed roadway along one of the Corporate Area’s busiest arterial corridors. Practical completion of the Mandela Highway Reconstruction and Realignment project was achieved in the last quarter. Both projects have provided a more efficient and comfortable driving experience for the over 70,000 motorists who use these roadways daily.

The progress made on the Ferris Cross – Mackfield MIDP major project, which is being implemented along a primary corridor within the hilly interior of Westmoreland, 184 kilometres west of Kingston, often goes unquoted in exposés on the impact of the MIDP on households, the private sector or the national economy. That major project has progressed quietly, now registering 95 per cent completion, and is essentially serving the over 5,6oo motorists who use it daily in a very practical way.

The physical works on the Westmoreland-based MIDP project commenced officially on April 5, 2018, and while it was scheduled to be completed within 540 calendar days, or 18 months, we are substantially complete and will deliver the project before the actual contract end date of October 5, 2019.

The NWA, however, can be easily forgiven for not congratulating ourselves on this significant achievement. The agency is not only completely seized of the vagaries of these major road-construction project, but is continually preoccupied with resolving the attendant challenges that we hardly have time to celebrate these small victories.

If we are being completely frank, the Mandela Highway, Hagley Park Road, Constant Spring Road, Ferris Cross-Mackfield, Barbican and Camp Road projects are truly mega, unprecedented infrastructural improvement works. To realise cost-efficiency and capitalise on synergies in relation to infrastructure development projects, the Ministry of Economic Growth and Job Creation has sought to align the work programmes of the National Water Commission with those of the NWA, resulting in more expansive and extensive road-improvement projects.

Construction schedules for each project under MIDP are created discreetly based on the knowledge of the scope of works to be undertaken at the time the individual contract is negotiated. While the contract time for the Hagley Park Road project is listed as 450 calendar days/15 months on the contract document, it does not account for ancillary works to upgrade the water supply and distribution infrastructure or sewer installation along the entire 3.7-kilometer length of the project.

Three different types of water pipelines totalling 7,000 metres and 5,968 metres of both 200-millimetre and 300-millimetre sewer lines are being installed along Hagley Park Road. These ancillary works could easily be treated as stand-alone projects requiring a minimum of three months to be completed, preceding roadworks in all instances.

An October 2019 target for practical completion of the Hagley Park Road project, barring any unforeseen challenges, is achievable from here based on the fact that 86 per cent of the works have been implemented to date. By that time, too, the planned strategic improvements to the Corporate Area network along sections of Camp Road, Constant Spring Road and Barbican Road up to Acadia Drive should be in the ‘tidying-up’ phase.

Without a doubt, this current undertaking has been engrossing and not without its difficulties. As is well known, the plan is to continue major improvements to the island’s main road network in other areas. We have learnt pertinent lessons from overseeing this groundbreaking programme of works, which will be applied to future projects.

We, however, want to impress upon all our customers and stakeholders that while projects are described and prescribed on paper, they are ultimately implemented on the ground under varying conditions and circumstances. Since, too, extensive underground works are being undertaken as part of the Hagley Park Road contract, the indispensable pressure testing of water pipes, which is also supervised by the NWA, may, on occasion, reveal leaks, which will not be left buried.

n Stephen A. Shaw is manager, communication and customer service, at the National Works Agency. Email feedback to columns@gleanerjm.com.