Karl Aiken | Parrotfish: to eat or not? 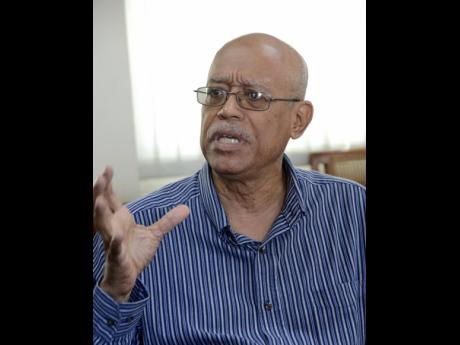 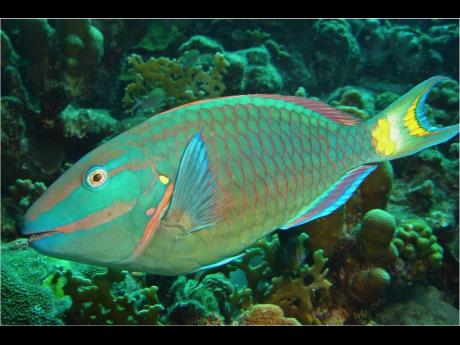 So what’s all the fuss about parrotfish? Well, most Jamaicans may have heard by now of the idea that surfaced of protecting parrotfish in our waters by banning their consumption. Well, it turns out that there are pros and cons to the idea. Let’s explore some of these right now.

What are these parrotfish, and why such a curious name? They are members of a large family of colourful tropical coral reef fish found not only on the Caribbean Atlantic, but even more abundantly, with many more varieties, in the Pacific Ocean as well. They are called parrotfish because their mouths have modified teeth that look like the beak of a parrot – not so much the curve of the parrot’s beak, but the cutting surfaces.

So what is the plan to ban them?

The plan is to stop all Jamaicans from eating parrotfish, sort of like how plastics are being banned. So where did the idea originate? About two years ago, social media began to track the discussion, which was anchored in the Pacific and Australia in particular. So why is this important?

It turns out that parrotfish consume very large quantities of algae and seaweeds as well as coral skeleton. Their more important roles here are, first, the removal of algae that carpets our local reefs. Excess algae, along with other marine problems too numerous to detail here, cause the death of coral by shading out light that they need.

Second, we cannot forget their crucial role in creating white sand by passing out undigested coral fragments. They literally help to create the sand on which our tourist visitors sit to enjoy the sun. No other fish group but the parrotfish does this unique job. So they are very important to reef health and to our national economy.

But how is it controversial to protect parrotfish in Jamaica? The major and most numerous fish caught in Jamaican waters is the parrotfish family as most of the snapper, jack, and other important fish have been nearly all removed from Jamaican reefs by more than 40 years of overfishing.

In the countries where the parrotfish ban originated, parrotfish are not of major commercial interest as they have lots of snapper and higher-valued species groups, for example in Australia. Also, their fisheries are in good condition – not overfished like ours – so they have alternatives.

In Jamaica, what little that is left is dominated by the parrotfish. Therefore, the problem arises when we consider what might happen if parrotfish banned in Jamaica.

The first issue to consider is what therefore would happen to the incomes of the more than 20,000 known fishers around our country. It’s not too difficult to see that all of them would suffer a drastic fall in their income after the ban and that this would continue for the duration of the ban. If we also remind ourselves that each fisher is estimated to support at least three other persons, there is a big socio-economic multiplier effect. This means that entire families and all coastal communities would be directly negatively affected in a ban.

Yet something needs to be done about the decline of our coral reefs and the reduced fish catches around our coastal waters.

What are some of the solutions?

We need to remember that fish pots (traps) catch everything – parrotfish and many other fish groups (up to 30 to 40 species are regularly caught) as well as lobsters and crabs. Also, there is no trap that can exclude parrotfish. Why don’t we just put them back into the sea when the fishers haul them up from the reef?

The answer is that putting them back is not going to work because of the fact that as we pull the pots from the depths commonly fished, the fish have a vital structure called a swim bladder which, being filled with gases, swells rapidly as the pot rises to the surface. The fish are all severely injured by this act and, essentially, are suffering from a fatal case of the ‘divers’ bends’ as well as being unable to breathe.

If we throw the parrotfish back, they are already dying, so all we would be doing is feeding the sharks. Do we want that? So throwing them back is not a workable option.

What about only keeping parrotfish bigger than 30cm (one foot) and putting smaller ones back? This is a mostly unworkable solution because of the problems pointed out beforehand as well as requiring that all fishers be issued with a measuring device. So it is quite important to appreciate that a partial or a total ban on catching them will really not help to protect parrotfish as the fish pots will still keep catching them with the other fish.

Jamaica already has 17 of these specially protected marine areas around the coast and one on Pedro Bank. So we must give more support to these sanctuaries and introduce more of them, and then over time, we will see a slow increase in parrotfish as well as other species that are depleted.

Jamaica’s fish sanctuaries are working very well. Recovery has already started in some areas. But we have been overfishing our reefs since the 1970s. That’s a long time. So we cannot, and must not, expect an overnight solution.

The sea and its living resources do not work like that. Real sustained recovery will take time. The NGO-generated interest in parrotfish conservation is heart-warming to see. Ordinary folks discussing parrotfish is a real first. Those persons need not despair as nobody wants Jamaican parrotfish to go extinct. That positive conservation interest should be turned into support for all fish species conservation through the expansion of fish sanctuaries and the introduction of new ones.

The long-awaited updated Fisheries Act of 2018, which has been in effect since June 1, 2019, should be the vehicle for introducing regulations that support our fish sanctuaries.

Finally, the Jamaican public, you and me, can help to make this drive to protect parrotfish work by asking for, and eating, only larger parrotfish that have spawned a few times and not the little immature ones that have not. That is one sure and simple way that every one of us can help.

- Karl Aiken is a senior lecturer in marine science at The UWI, Mona, with many years’ experience in fisheries conservation and management. Email feedback to columns@gleanerjm.com and karlaiken2@gmail.com.