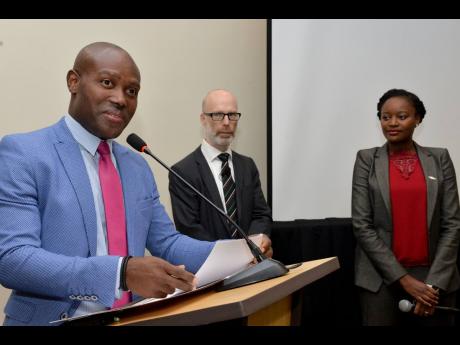 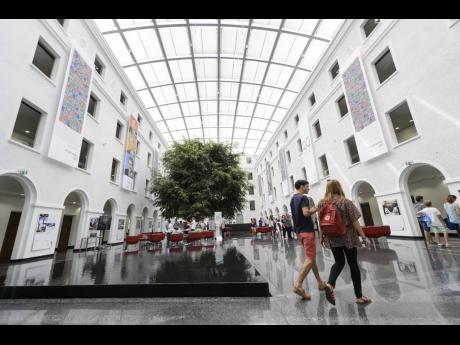 File
In this Sunday, June 14, 2015 file photo, people visit the WTO headquarters during the open day at the WTO: ‘Merci Geneve’ at the World Trade Organization WTO headquarters in Geneva, Switzerland.
1
2

Twenty-five years ago, Jamaica formally became a member of the World Trade Organization (WTO) on March 9. 1995. The independent international organization, the WTO, superseded the United Nations (UN) affiliated General Agreement on Tariffs and Trade (GATT) on January 1, 1995. Prior to this, Jamaica was a contracting party to the GATT from December 31, 1963.

The WTO regulates global trade in goods and services, providing predictability and transparency. As a small, developing economy, Jamaica supports multilateralism and a rules-based global trading system where it has a voice and can participate in decision making. The country has been a strong advocate in trade and development matters.

Jamaica’s Permanent Representation and Mission in Geneva; established in 1965, serves the WTO and UN organizations in Geneva, UN offices in Vienna, Austria, and the UN Food and Agricultural Organization in Rome, Italy. In addition, they also serve as embassy to Switzerland along with non-resident bilateral accreditations to other countries, including Austria and Italy. The mission, in addition, acts as a consulate. This is a mammoth task not for the faint of heart!

Permanent representatives of Jamaica in Geneva from 1995-2018 were Lloyd Barnett, Richard Pierce, Anthony Hill, Ransford Smith, Gail Mathurin, Peter Black, and Wayne McCook. Cheryl Spencer is the incumbent. The men and women serving through the years in Jamaica’s small mission have given, and continue to give, yeoman service with limited resources.

Jamaica was actively engaged in the landmark GATT Uruguay Round of multilateral trade negotiations, 1986-1994. Paul Robertson, then minister of foreign affairs and foreign trade, led Jamaica’s delegation to the GATT Ministerial Conference in Marrakesh, Morocco, April 12-15, 1994, to sign the resulting agreement establishing the WTO and a range of new multilateral trade agreements (MTNs) covering trade in goods and trade in services as well as trade-related agreements on investment measures and intellectual property rights, and dispute settlement.

Having joined the WTO, Jamaica turned to implementing the MTN Agreements, which include special provisions in support of developing country members known as special and differential treatment (S&DT). S&DT provide, among other things, transition periods and other concessions to facilitate implementation and the more gradual integration into global trade.

Implementing these agreements included drafting and adopting new domestic legislation and reforming existing or establishing new institutions. This work was done in collaboration with other relevant regional and international organizations. The Jamaica Intellectual Property Office (JIPO) and the Antidumping and Subsidies Commission (ADSC) resulted from this process. Jamaica Customs, Trade Board, the Bureau of Standards, the Ministries of Agriculture, Industry and Commerce, and Finance had to reform procedures to implement these Agreements and to align Jamaica’s trade policies and procedures with international standards. This work is ongoing.

By the time the Textiles and Clothing Agreement was implemented in 2005, liberalising trade in this industry, the sector in Jamaica, based on quotas, had already disappeared. The more favourable terms granted by the USA and Canada to Mexico in the North American Free Trade Agreement (NAFTA) led to investors relocating. Jamaica was also unable to compete with producers in Asia and Latin America.

Jamaica’s WTO goods schedule provides space, enabling the application of higher tariffs to protect domestic agricultural and manufacturing products. This has not had a significant impact on imports.

Under the WTO Agriculture Agreement, Jamaica is permitted to use “green box” subsidies in the agriculture sector if the Government is able to finance the programmes. Under the Agreement on Subsidies and Countervailing Measures, however, Jamaica was required to phase out export subsidies in free-trade zones. So far, there are no disciplines for subsidies in services.

The WTO dispute settlement mechanism was strengthened under the Dispute Settlement Understanding (DSU). Among the first cases initiated in 1996, under these rules was the Case against the European Communities (EC) Regime for the Importation, Sale, and Distribution of Bananas brought by Latin American banana producers supported by the USA. The African, Caribbean and Pacific (ACP) banana producers, including Jamaica, were third parties. The EC lost this protracted case, which was finally concluded in 2009.

Similarly, Australia, Brazil, and Thailand, in 2003, brought a case against the EC’s Export Subsidies on Sugar. ACP sugar- exporting countries, including Jamaica, were again third parties. This case, concluded in 2005, was also lost by the EC. Jamaica’s exports of bananas and sugar have become uncompetitive in the UK market.

Jamaica has not been a party to a dispute at the WTO. Nevertheless, it is significant that various Jamaican legal experts have been invited to serve on WTO dispute-settlement panels particularly adjudicating trade- remedy (anti-dumping, subsidy, safeguard) cases.

Review of the dispute, settlement mechanism (DSM) has been in progress since 2000 as part of the built-in agenda for improvements in the WTO. Jamaica participated in this process, but among key members, the political will to make progress was absent. Now, the USA has brought about the suspension of the Appellate Body by not approving new judges. With this situation, discussions on DSM reform have been revived.

The Trade Policy Review Mechanism (TPRM) promotes transparency through monitoring members’ national trade-policies and practices and assessing their effect on the multilateral trading system. Jamaica, as a developing country, has trade policy reviews every six years. So far, the country has undergone four reviews – in 1998, 2005, 2010, and 2017.

The WTO is the forum for multilateral trade negotiations to facilitate the progressive liberalisation of global trade. Negotiations on subjects left over from the GATT UR and built into the agreements e.g. on Trade in Services, Agriculture, and Dispute Settlement, continued in the WTO. Product and subject specific negotiations are also facilitated, for example the Information Technology Agreement liberalizing trade in IT products.

In 2001, a new round of MTNs was launched. This is the Doha Development Round. Jamaica has been an active participant in these deliberations. See Part II.

Capacity-building is a necessary activity in the WTO. Jamaica, like other developing members, was at a disadvantage in international trade policy practices and procedures. The country continues to benefit from the many training courses offered both at WTO headquarters in Geneva and within the region in association with the Inter-American Development Bank and other partners. Jamaica has also had several WTO internships. The UWI Mona campus was once the location for the three-month WTO regional trade-policy course and site of the WTO academic chair. Trade capacity building is an ongoing need for Jamaica.

Personnel in the WTO Secretariat

The most senior Jamaican employed at the WTO in 25 years is Ambassador Wayne McCook, senior adviser in the Office of the director general. Anneke Hamilton was employed as an economic officer in the Agriculture and Commodities Division. A few Jamaican nationals have worked at the WTO as interpreters and translators.

Jamaican foreign trade ministers have visited the WTO in Geneva to attend ministerial meetings such as the Global Aid for Trade Review, and to participate in Jamaica’s Trade Policy Reviews. Senator Kamina Johnson Smith participated in Jamaica’s fourth Trade Policy Review in September 2017. Prime Minister Andrew Holness visited the WTO HQ in June 2019 and met with the DG. In his remarks, DG Azevêdo acknowledged that Jamaica was an active member and a keen advocate for issues concerning small, developing economies.

Indeed, as a small, developing member with resource constraints, Jamaica has certainly made a positive impact at the WTO during these 25 years.

Jamaica’s challenges and achievements through these years are further examined in Part III.