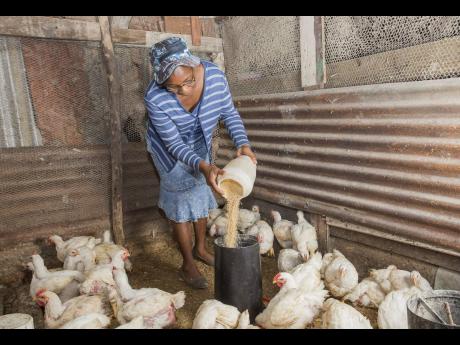 FILE Jamaica is self-sufficient in broiler meat, thanks to the investment of Jamaica Broilers and Caribbean Broilers and thousands of Jamaicans who supply them with whole birds for processing. Donovan Stanberry says Jamaica’s food import bill is high and is skewed towards certain products, such as grains and other inputs for animal feeds.

Between December 2019 and February 2020, The Gleaner published a series of articles on my behalf, exploring the issue of food security in Jamaica based on an analysis of the country’s food-import bill for 2018.

The current COVID-19 pandemic, which has occasioned major disruptions in global supply chains, curtailment in the movement of people across borders, and the rendering of thousands of people ill or indisposed to normal economic activities, will most certainly have an impact on agricultural production, trade, and food security in Jamaica.

As my previous analysis shows, though our food-import bill is high, it is skewed towards certain products such as grains and other inputs for animal feeds (12.7 per cent); products of animal origin (30 per cent); cereals for food (10 per cent); and refined products (snacks, juices drinks, confectionaries, biscuits, pastries, etc (11.6 per cent).

Based on the structure of our food imports, therefore, the hotel sector would the industry to be seriously affected, except that the number of tourists coming to our shores in this crisis has been drastically reduced.

Our livestock sector is particularly vulnerable since our well-developed broiler, egg, and pork sectors depend heavily on imported animal feed and grains for their survival. In terms of ordinary Jamaicans, we can survive largely on what our local farmers produce in relation to fresh vegetables, fruits, and our starches.

In this context, it is important that our farmers feature prominently in the announced stimulus packages. Where we are compromised is in the area of animal protein, which we not only import much of, but as mentioned previously, our indigenous livestock sector has a significantly high import content. Our large imports of snacks and juices are frankly not ‘drop dead’ critical.

Hitherto, our focus and concern about our food-import bill and food security were driven by fiscal anxieties. The COVID-19 crisis, however, which is unprecedented in terms of its scope (enveloping almost all countries simultaneously) and the triggering of widespread closures of border is now forcing small island developing states to focus on another dimension of food security, that is, our dependence on the North for seeds and planting material.

My former colleague Dr. Lystra Fletcher Paul, former Caribbean Subregional coordinator of the Food and Agriculture Organization (FAO), made a startling revelation in an article in The Sunday Gleaner of March 22 that “in Trinidad and Tobago, input suppliers have indicated that they have already run out of seeds, seedlings, and potting soil. One supplier in Miami had signalled that he would not be able to replenish his supply because he was closing his business for fear of the virus”.

The question arises: how sustainable is Caribbean agriculture when we depend so much on North America for our supply of seeds? This is a historical problem that small developing countries of the South, though largely politically independent, have not been able to resolve.

In the first instance, our Caribbean islands largely emerged as plantation economies from slavery and colonialism and were characterised by monoculture- sugar cane grown exclusively to satisfy the ‘sweet tooth’ of our European colonisers.

Within the framework of mercantilism, the islands procured all they consumed from the metropole. It was to the credit of the slaves that there was a small measure of diversification in relation to the crops they grew in their limited spare time to feed themselves.

Mainstream agricultural diversification was only initiated with the waning fortunes of sugar in the late 18th century, with the rise of capitalism and trade liberalisation in Europe. This diversification, however, was restricted to coffee, cocoa, citrus, tobacco, and other such commodities, destined for export.

It was around this same time, about 1798, that Thomas Malthus became concerned about the capacity of the then world to feed a burgeoning population.

Malthus’ fears were, however, largely not realised because of significant advances in science and technology applied to agriculture and reflected, in large scale, mechanisation and the manufacturing of fertilisers and chemicals as well as hybrid seeds. Unfortunately, the so-called Green Revolution focused on a very narrow band of species, principally wheat, rice, maize, and potatoes, excluding the overwhelming majority of plant species used for food in the poor South.

The widespread development of hybrid seeds ensured that farmers in the South remained dependent on the North, the architects of the Green Revolution, for seeds for the cultivation of the more popular crops. These hybrid seeds usually require a regime of huge dosages of fertilisers and chemicals and are so engineered for ‘one-year-only’ use. This is not only inimical to the environment but breeds dependency and militates against diversity in our food supply. It is this dependency that is now exposing our vulnerability in this COVID-19 crisis.

The fact of the matter is that the Green Revolution left behind a large number of species used for food. Over the history of mankind, over 10,000 plant species have been used for food. Today, we focus on approximately 120 species which, according to the FAO, provide 90 per cent of our food, with rice, wheat, maize, and potato satisfying more than 60 per cent of our food requirement.

This is clearly contrary to the dietary diversity the Lord intended for mankind: “Behold, I have given you every herb bearing seed, which is upon the face of the all the earth, and every tree, in which is the fruit of a tree yielding seed, to you it shall be for meat.” (Genesis 1:29).

This pattern of dependence was further reinforced in the 1980s by the structural-adjustment programmes, sponsored by the Bretton Woods institutions, mandating small, developing economies to build their economies around the service sectors, leaving the great North to supply us with ‘cheap food’.

Of course, the so-called cheap food from Europe and North America was the subject of considerable subsidies. The result of all of this conspiracy was the widespread neglect of a number of indigenous species used for food, a repudiation of the wholesomeness of many local foods and a widespread and enthusiastic embrace of foreign-based and highly refined foods, which was hitherto alien to our diets.

As the world population grows, there is clearly a need for science and research to find means of preserving these plant species for food and to establish means of cultivating them on a large scale. Within this context, conservation and rapid multiplication of plants through seeds and other planting material are essential.

In a real sense, therefore, food security begins with the capacity to conserve and multiply our indigenous species for food. This was clearly not the mandate of the Green Revolution.

It was against this background that the nations of the world, under the auspices of the FAO, approved on November 3, 2001, the International Treaty on Plant Genetic Resources for Food and Agriculture (ITPGRFA).

According to Clause 28 of the treaty, its objective is the “conservation and sustainable use of all plant genetic resources for food and agriculture and the fair and equitable sharing of the benefits arising out of their use in harmony with the Convention on Biological Diversity, for sustainable agriculture and food security”.

My next article will examine what Caribbean states, including Jamaica, must do to safeguard our supply of seeds and conserve our plant genetic resources for food and agriculture as a fundamental step in securing our food-security policy.