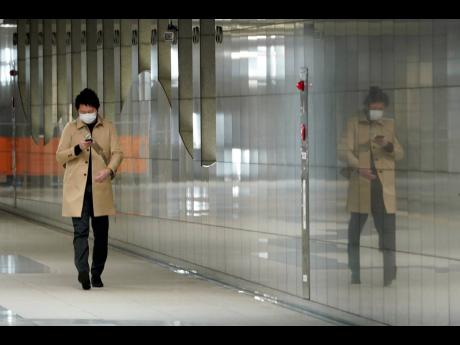 A man with protective mask walks on an underpass Thursday, April 9, in Tokyo, Japan.

A few days ago as the lady and I drove out, headed to the hardware store to purchase one piece of lumber, she was wearing a face mask, and I had mine on the seat behind me.

“So, what’s the point of you wearing the mask in the car and me without mine? You are making me look quite foolish.”

At the hardware store, she remained in the car, the car engine and the air condition on while I bought the piece of one-by-fourteen sawed into two equal pieces. After they were placed in the minivan and we drove off, again I gazed at her, and in stifling a groan I forced a laugh until it became a genuine one. “Honey, tek off di mask. It look fool-fool.”

What I got from the lady was a grand lecture. “Think of it. If I have the virus, and you don’t, I am protecting you from getting it. If you have the virus and I don’t have it, I am protecting myself from getting it.” She made sense even as I said again, “Tek off the thing, girl. Wi jus peck each other on the mouth half hour ago. A just two a we in di car.” She removed it.

In the 1980s when the HIV/AIDS sexually transmitted infection moved from the foolishly designated homosexual or Haitian malady to epidemic to pandemic, reality convinced the global heterosexual community that the man wearing a condom was the best solution.

In the days of the 1960s and 1970s, the usual sexually connected diseases known locally to menfolk were gonorrhoea, syphilis, and a thing called “non-specific urethritis”. In the 1960s as now, given a choice, no man would wear a condom. Lucky for the generation conceived by the boomers, those born in the 1970s have eased their way quite comfortably into the use of the condom. Those coming after have also socially evolved into less hate of the latex roll-on.

The thing about sexual congress and exposing oneself to a sexually transmitted infection in a time when an injection and a few pills solved one’s problems made a radical shift with the arrival of the HIV/AIDS pandemic. Gonorrhoea could be cleared up. Syphilis was a bit more problematic, but it, too, could be made to disappear. Not so with HIV/AIDS.

To men, and I assume so with women, contracting a disease that stuck with one for life was not exactly fun even it there were no outward signs to signal to the rest of the population that you had it.

What does a couple do in COVID-19 times?

In the early 2000s it was decided that the best ‘social distancing’ that could be employed in the fightback against HIV between two people committed to one relationship was the man wearing a condom.

A few assumptions were entered into evidence. The first was, when it came to sex, people were seemingly driven to lie. Caught between not wanting to hurt the object of ones desire while surreptitiously desiring another person sexually has been the biggest game in town since the recognition of society as the best form of organisation for the human species.

So the lie with a straight face has become the norm simply because society is afraid to admit what people individually know. Sexual desire has no name attached to it.

The decision to use a condom in casual relationships was obvious. Using it in committed relationships was really problematic. Silently so. People married for five years should readjust the sexual routine with the man wearing a condom.

Which one of us is lying must be there in the back of our heads, they must be saying as the man tries to convince himself that he is pure as tropic cloud.

A few months ago I was given three n95 masks by my friend Dr Jephtah Ford as he set out and accurately predicted what would happen before the new coronavirus was given the name COVID-19.

“These things are going to be in short supply. You and your small family are going to need them.” I must confess that I made contact with my sons and told them to get hold of the masks.

But, like a man and his wife suddenly making the decision to use a condom, at what stage of the relationship does reality hit home. Certainly it simply looks idiotic for two people to be sitting in the living room watching Netflix while they are fully in masks and will be sleeping beside each other in a few hours.

According to Chupski when I laughed at her wearing the mask while driving, “If you have COVID-19 I can’t get it from you. And if I have it I can’t give it to you.” She paused for one second then said, “Don’t say a word. It’s just the symbolism that has to be understood by the general population. You know many people not taking this thing serious.”

I spent six days in a ward of the University Hospital of the West Indies in November 2000 while the supremely committed doctors and nurses there attended to me and hundreds of others while in the throes of acute pancreatitis. I know what terrible pain feel like. I know the beautiful and comforting feeling when one is given an injection to drive away that pain.

In Dr Phillps’ moment of illness I wish him a speedy recovery and back to 100 per cent. He will need that newness in the coming months.