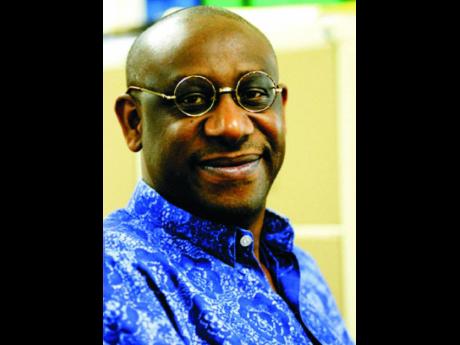 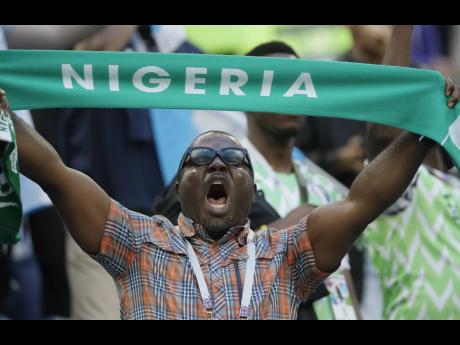 AP
A Nigerian football fan cheers during the group D match between Argentina and Nigeria at the 2018 football World Cup in the St Petersburg Stadium in St Petersburg, Russia. 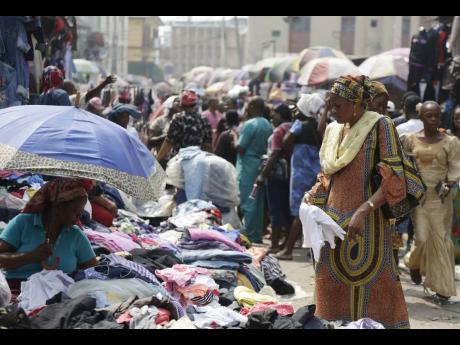 AP
Pedestrians shop in a roadside market in Lagos, Nigeria. 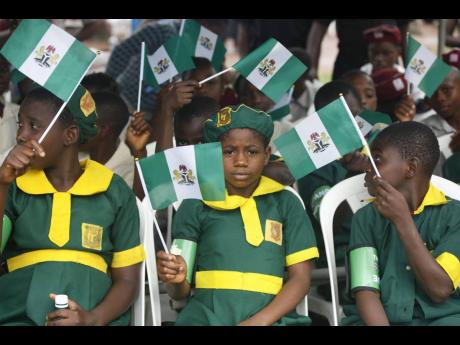 Nigeria. The Black world’s most populous country, with nearly 200 million citizens, and its largest economy, remains a huge enigma of unfulfilled potential. The country turned 60 this week on October 1. Following one civil war, seven military regimes, and three failed democratic experiments, Nigeria, in the words of its greatest novelist, Chinua Achebe, is “no longer at ease”. Could things fall apart?

Despite Nigeria’s rich talent and abundant natural resources, its leaders have clearly lacked a sense of noblesse oblige. Both politicians and soldiers have failed spectacularly to transform the country’s fortunes, and Nigerians have declared a plague on both their houses. These leaders have been unable, in six decades, to establish a viable democracy, to guarantee the security of their citizens, to lift 70 per cent of their compatriots out of poverty, to build durable infrastructure, and to stem profligate corruption that has seen an estimated $582 billion pilfered and siphoned off into foreign bank accounts.

While Nigeria can be likened to a Gulliver, the metaphor of Lilliputian can equally be applied to many of its leaders whose gargantuan greed has prevented a country of enormous potential from fulfilling its leadership aspirations. Nigeria has been reduced to a giant with clay feet, fed on a gluttonous diet of oil rent that its leaders have simply collected and squandered. The country has the largest number of poor people in the world at 87 million. Oil still accounts for 90 per cent of foreign exchange earnings and over half of government revenues.

Nigerian author Buchi Emecheta wrote extensively about the plight of oppressed women in classic novels such as The Joys of Motherhood and Gwendolen, which deals with the plight of a Jamaican family in London. Such misogyny remains rife across Nigerian society in sectors such as employment, education, and inheritance, with the COVID-19 pandemic exposing how rampant the scourge of gender-based violence has become. The political system is highly chauvinistic, with no female state governors out of 36, and only 21 out of 469 national legislators (a paltry 4.48 per cent) being women - one of the lowest ratios in the world. Considering that women constitute half of Nigeria’s population, this scandalous waste of talent must be urgently remedied through temporary quotas.

More positively, Nigeria’s foreign policy was particularly active with the creation of the Economic Community of West African States (ECOWAS) in 1975; membership of the “Frontline States” of Southern Africa in the 1980s; the deployment of over 150,000 military and police to global peacekeeping missions; and interventions in Liberia, Sierra Leone, and Guinea-Bissau in the 1990s and 2000s that resulted in over 1,500 Nigerian fatalities and cost the country over $1 billion. This Pax Nigeriana has represented a unique sacrifice in blood and treasure. Since 1987, Nigeria’s Technical Aid Corps has also sent hundreds of the country’s doctors, nurses, engineers, lawyers, lecturers, and surveyors to Caribbean countries such as Jamaica, Dominica, and Belize.

A PLAY OF GIANTS

Basking in oil wealth, Nigeria hosted the World Black and African Festival of Arts and Culture (FESTAC) in 1977, involving 70,000 artistes and delegates from 59 countries across Africa, the Caribbean, and the diaspora at a cost of $1.75 billion in today’s money. The Pan-Africanist prime minister of St Kitts and Nevis, Robert Bradshaw, personally attended the extravaganza, which featured the Afro-Caribbean band Osibisa. FESTAC also involved durbars, regattas, and traditional dances, as well as elaborate works of art. The festival represented a national showpiece by a self-confident elite to mark the arrival into the ranks of the nouveaux riches of the world’s largest black nation. Nigeria sought to promote African culture as a sign of equality with a West that had often denigrated the Black world’s traditions.

The achievements of Nigerian writers and artistes have been impressive. Wole Soyinka became the first African winner of the Nobel prize for literature in 1986. Chinua Achebe won the Man Booker prize, Ben Okri and Bernardine Evaristo the Booker prize, while Chimamanda Adichie claimed the Orange prize. In the world of music, the 1950s Highlife era was led by titans such as Victor Olaiya, Rex Lawson, and Bobby Benson. Their heirs, Sunny Ade and Ebenezer Obey, battled for supremacy in juju music, while iconoclastic Afro-jazz superstar, Fela Anikulapo-Kuti, finally achieved global immortality posthumously through the 2008 Broadway musical Fela! Contemporary artistes like Tiwa Savage, Asa, Wizkid, and Burna Boy represent the voice of a new generation.

Nollywood has, perhaps, been the most potent symbol of Nigeria’s cultural “soft power”. It is the second-largest film producer in the world behind India’s Bollywood and ahead of America’s Hollywood. This industry is also thought to be the second-largest employer in Nigeria. Nollywood films are now widely available from Banjul to Baltimore to Bridgetown and have influenced the dress of Bajan women, Kenyan politicians, and Congolese pastors. By 2006, Nollywood films were ubiquitous across the Caribbean, selling hundreds of DVDs a week. The University of the West Indies hosted an African and Caribbean film festival in Barbados from 2002, featuring Nollywood director Tunde Kelani.

Nollywood films were seen as authentic in presenting genuine African lifestyles with which many Caribbean Hollywood-obsessed film-goers had not previously been familiar. Many local women identified with the assertive feminism on display and the fact that glamorous actresses had figures of ample proportion contrary to Western ideals of beauty. Many could identify with the Pentecostal religion – similar to Caribbean charismatic churches – on display in these films. Caribbean beliefs in Obeah and Voodoo further found resonance in the supernatural spirit world often depicted in Nollywood.

In the realm of sports, Nigeria’s Super Eagles were African soccer champions in 1980, 1994, and 2013 and won Olympic gold, along with long-jumper Chioma Ajunwa, in Atlanta, in 1996. The men’s 4x400 relay team also struck gold in Sydney four years later. Legendary Nigerian boxing world champions have stretched from Dick Tiger to Hogan Bassey to Anthony Oluwafemi Joshua.

The current Nigerian administration of president Muhammadu Buhari is struggling with 27 per cent unemployment and a perilous 14 million youth – who represent 60 per cent of the population - out of work. Insecurity between herdsmen and farmers has increased local conflicts across the country even as Boko Haram and its breakaway Islamic State West Africa Province (ISWAP) have wrought widespread misery in the north-east, with more than 50,000 deaths and over 2.5 million displaced. Amid declining oil prices, the country has amassed an unsustainable $85 billion debt. One hopeful sign has been the fact that Nigeria’s 1.2 million-strong global diaspora sent home $25 billion in remittances in 2019 – more than 80 per cent of its annual budget. However, as the country turns 60, Nigeria is a limping Leviathan unable to maintain the most basic responsibility of statehood: providing security to its citizens. Scores of charismatic pastors and imams, rather than preaching a “liberation theology,” instead continue to practise a “prosperity gospel. Its prayerful populace appears to be awaiting a miraculous deus ex machina. But, might Nigeria instead be consumed by fire and brimstone in a millenarian apocalypse?

- Professor Adekeye Adebajo is director of the University of Johannesburg’s Institute for Global African Affairs in South Africa, a joint initiative with The University of the West Indies. Send feedback to aadebajo@uj.ac.za.