Mark Wignall | Jamaica is seated on the edge 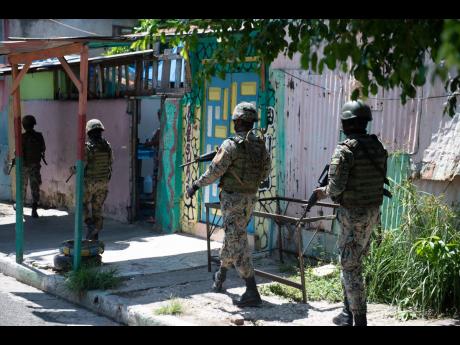 File
In this October 2020 photograph, members of the Jamaica Defence Force make their way along Fleet Street, in Parade Gardens. Jamaica recorded just over 1,300 murders last year, a vast majority were shooting deaths.

Online publication The Daily Beast carried an article last Wednesday which stated in part, “It’s been said that if you outlaw guns, only outlaws will have guns – but that is not true in Japan, which has some of the strictest laws on the books forbidding the possession of guns and imposes even harsher penalties for using them.

“If you fire a gun at someone here, you’re likely to spend more than 20 years in jail. The severe penalties even deter the Yakuza, Japan’s organised crime syndicates, from using firearms. In 2017, there were only three people killed by gunshots in the entire nation.”

Last year, Jamaica, with a population of just under three million people, recorded just over 1,300 murders, the vast majority by guns while in Japan, with just over 126 million, three people were killed by bullets. Think of that comparison.

One main question quite embarrassing for me to ask must be asked. On the metric of murders and guns, just to compare us with Japan, does it mean that we are barbaric and the people of Japan have reached a level of civility and social wellness that we can never hope to achieve?

At present, it seems that all of the worst of our ills are parading right at the top of our pressing priorities in a contest to see which one can stand atop the podium and claim to be the best of the worst.

The excellent leadership of the Jamaica Labour Party administration throughout 2020 while COVID-19 was at what we thought was its worst spread throughout Jamaica has taken a big hit in the early months of 2021, and many sectors of society are dumbfounded and unsure as to which fork in the road they should take.

As COVID-19 refuses to relax its iron grip on us, gun activity has been pushing its way into our vitals and making us question our viability and our culture as a nation, as a people. As our collective indiscipline rears its ugly head in the seemingly impossible task of getting us to wear masks and abide by the protocols in mass gatherings, the best we can claim is that many sections of America have adopted the same behaviour. The same America that once elected Donald Trump.

A few days ago, two women approached me with a most depressingly sad situation. It was about a child aged six years old who had cancer of the brain. Terribly pressed to a hard concrete wall by the reality, an activist teacher from a primary school decided to launch a cake sale to help in providing the funds to pay for the exorbitant fees to send the child to the United States and foot the medical bills.

A man whose face I knew but not his name asked to meet with me, and when he did, began to cry as he sought my assistance in trying to find funds to bury his father. I simply told him I could not help.

It was impossible to avoid what was the news in the latter part of last week. A policeman had allowed himself to be on video record in a sexual act. Just about every person I met was talking about it. But as least our people were laughing, and many were forgetting about their problems.

“Di police boy is a champion. Him haffi hide now, but if him go a States now, him can mek big money. Plus, nuff woman love him right now,” said a woman to me.

A set of twins who were celebrating their 57th birthday echoed each other in offering praises to the policeman. “Him braver dan we,” said one of them. “None a wi ever do dat before.”

The other twin grabbed his brother by the shoulder and spun him around. “Talk fi yuself. Don’t assume dat your life is my life.” His identical lookalike then said, “So you do dem tings deh and don’t even give mi a heads up?” The place broke out into raucous laughter.

I must confess that I have pictures (not videos) in my phone that are of very private and intimate settings. What I can never quite fathom is why individuals in ‘tiefing’ situations would consent to being taped. Then again I suppose I really do understand. The sexual power of the moment will always twist a man’s consciousness and trip him out totally.

The criticisms were many, and during the time when people were saying that PM Holness was hiding and becoming afraid to face the nation, one political reality was looming its head as not just a possibility but a likelihood.

Was the nation in its phase of falling out of love with Andrew Holness and seeing what was thought to be a side he hasn’t shown since his dibby-dibby apprenticeship in 2011?

“Is not fi him fault,” said a lifelong JLP supporter a few days ago. His friend, a People’s National Party supporter who admitted to me that he did not vote in the last election, disagreed with him.

He simply said: “Nutting. Mek minister talk. Holness must only talk now when full vaccine roll out. Him seh everyting a ready. Anything else him seh now gwine hit him hard. Di people want somebody fi blame.”