Mark Wignall | Will we have to live with this criminality forever? 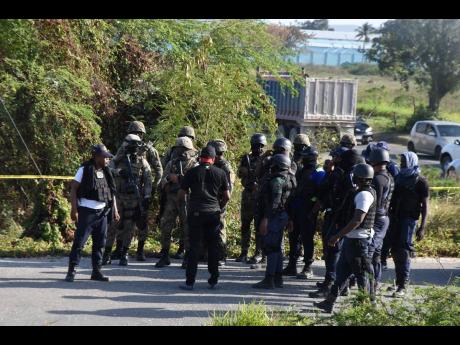 Kenyon Hemans/Photographer
Policemen and soldiers gather to search a heavily vegetated section along the Spanish Town Bypass where four robbers who targeted a credit union in Portmore escaped after abandoning a Nissan Latio motor car.

The management of Hawkeye was recently moved to issue a statement after tragedy struck and one of its guards was killed in the line of duty.

Sharon Laing, the general manager in charge of human resources said, after the killing: “There is an emotional escalation from COVID-19. There is desperation, there is a lack of jobs and people have gotten fearless and uncaring. The robbers are now unconscionable. They are bold, unafraid, and are reckless to a point which makes them even more dangerous. In the past, a team being present, they would all depart. Now, there is very little caution even towards the police force and any other member of the security field. This boldness has just put us on a higher level of alert, caution, and wisdom. If they can go in a church and attack in a church, it just shows the moral decay in the country. Somehow, we have to reach the hearts of people in order to make some change. The heart is now hard and callous, and we have to find a way to reach those hearts.”

I cannot vouch for the sincerity of what Laing said, but I believe she, like most of the other people in the business community in Jamaica, is nearing the end of her tether in trying to figure out what next can be done to thwart the ferocity of the criminals in Jamaica.

It used to be, back in the not so long ago 1980s, that the person who had a landline phone had some social standing that could be used as a boasting point in a conversation.

That means little now because priest, politician, thief, and the utterly lawful all have phones. I mention that because the gun, the phone, and badness are entirely locked into our new criminality.

OH NO, I LEFT MY GUN

A few weeks ago, I found myself at the home of one of my acquaintances. He had picked me up, and we were at his house discussing some political matters. After we had completed our mission and we were on our way to my house, he bawled out, ‘R…! Mi lef mi gun!’

He almost turned around in the middle of the road to take the turn back to his home to retrieve his firearm.

“Mark, are you serious? These are not normal times, and I am always in a mood to tackle any guy that wants to f… with me.”

“What about your family?” I asked.

“Well, as you know, my wife has her piece, and I encourage her to be vigilant.”

Later when I was at home I thought about my lady, my children, my ex-wife, my grandchildren, and others in my family.

How many of them could I, as patriarch of the family, protect in these turbulent times?

It is not that I feel any sort of rabid fear when I venture outside of the safety of my house. I don’t. But what must I summon in my head to keep me from brimming over with fear for the safety of those who are not beside me?

Can the Government protect me? If at 3:30 in the morning when most criminals find it most convenient to kick in doors and shoot those who have been targeted, who will protect those whose biggest sin is to be sleeping in the wrong place at the wrong time?

The last vaccine I can remember taking was when I was in 10th grade at Kingston College. That would have been sometime in 1966.

Last week, a lady I knew who was having problems with her man asked me if I could assist her in paying for an HPV vaccine.

She explained to me that she was only seeking assistance, not the full amount. The truth is, I had no idea what a vaccine would cost in the open market.

In recent days, many people have been quizzing me about the safety of the vaccines being touted as top line in the fight against COVID-19.

The sticking point is, basically, mistrust of government and international agencies. Many people who find themselves lower down the totem pole of learning are now finding themselves keeping company with highly educated folks.

“Do what you feel like doing,” has been my main response after my appeals have gone unheard.

It was the second time in the last two weeks that one of her eyes and a side of her face were showing very obvious bruises of abuse by her spouse.

“And yu know, di worse ting bout it is we not even married,” she said as she admitted to me that he had thumped and kicked her in the face and other parts of her body.

“So what if you were married?” I asked as she held down her head in last-minute shame.

“Mi not gwine sey him would have full right, but at least me and him would be blessed in marriage.”

Jamaica is rife with men who cannot deal with their constant loss of power over women and it has taken a terrible toll during the COVID-19 pandemic.

“Is two weeks me leave him now,” said Ionie. “Him sey him a go kill mi if mi nuh come back. Mi haffi get one a mi gangsta fren fi mek him back dung.”

At this time, she is on her own. Two visits to the police station have not helped.

Seems the police are under pressure, too.