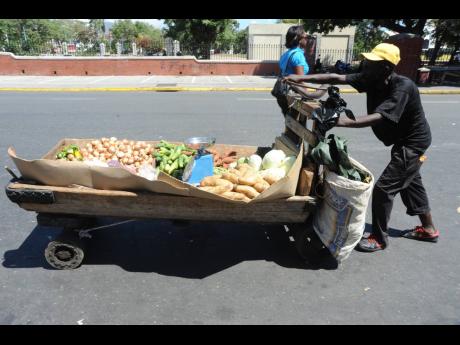 File
In this 2014 file photo, a vendor pushes his handcart laden with produce in downtown Kingston.

Do you have a drone? If you do, launch it and slow it down on a section of Riverton City where you may see a picture in frame after frame of five children sorting glass bottles, metals of various shapes or old electronic units as others with digging tools pass it to them.

You will notice that the children, although working for 10 hours for the day, do not openly express dissatisfaction as they sort stuff one piece after the other. A lot more is at play that cannot be captured by a mere drone. In other words, some may be sad and in social pain but not all are unhappy.

An hour later, move your drone to a fancy hill community. A party is on. Pre-coronavirus or in the present there is a poolside gathering. Pity the drone cannot capture the smell of barbecued wild hog and grilled lobster. Many of those at that gathering are happy and socially and economically filled, but not all are happy.

We have long been fed the diet that there are two Jamaicas. It’s more like about four Jamaicas but at this stage there is no need to delve into those other two. Downtown Kingston is not really known by a lot of uptown people. It is the official capital of Jamaica’s informal economy. The official police force in Jamaica, the Jamaica Constabulary Force (JCF), has long had a secondary role in providing security to the regular citizens and people doing business downtown.

Nothing much has changed in that since the days of Dudus. But the pandemic has rained hell on downtown. As one supplier of wholesale goods to downtown told me last week, “The downtown wholesale market ensures prices and supplies are stable. Without Government assistance, it moves huge scores of trucks into the city nightly.

“It employs the night shift of the market. It give the restaurants the lowest prices between 4 a.m. and 5.30 a.m. As you look around you will see that a dart is rented to move a rented stall or even a bed. All of this used to be humming while uptown is fast asleep.

“Cardboard is sold, night food is sold and drugs are bought and sold. The drugs will end up all over St Andrew.”

Then he told me a shocker. “You ever wondered how when a stall gets destroyed by the Government it gets replaced the next day. It’s like a game.”

“So how are they moved around?” I asked.

When the cart man makes more than the stockbroker.

He points me to a place where there are mounds of carts piled up. ‘Those used to be fully operational before the pandemic. A few men I know had close to 100 carts. Uptown people underrate these uneducated men.

Now all of that is stalled. During the very time when the curfew is drawn is the time when downtown Kingston does some of its most lucrative business.

Last Wednesday, I ventured out on the roads to try sniffing out what Jamaicans at street level were saying about the Government’s latest lockdown plan. The Jamaica Labour Party administration was into another of its efforts to plead to, beg and cajole our people into better behaviour in light of the increase of our COVID-19 infections, pressure on the public health system and the seeming indifference to protective measures by wide swathes of the population.

“So what should the Government do?” I asked.

“Even mek it go to three o’clock. On top a dat, Holness must ask di landlord dem fi gi wi a break fi a while. Our business choke out but di rent haffi pay.”

On Tuesday, I must confess that I was expecting better from some of our young people. No such luck. “Missa Mark, a whey you really a sey. Wi nah wear no mask. Wi young an’ strong. If ‘rona pass round ya so wi a go gi har a @$!!!!. Shi fraid a wi.”

Not much has changed in 100 years.

I’ve been doing some reading on what obtained during the great pandemic in 1918 and beyond. Many similarities exist even though medical science was not as advanced as it is now. What jumps out at me is that the main commonality is the behaviour of the people. Not much has changed.

There was a deadly third wave of influenza in 1919 as people became fed up of the restrictions imposed on them. Surely, we now need to push that out in the public space and drill it into people’s head using all the skills of 2021 marketing.

It was very obvious that after an application of good governance and policy that at some stage, the people would convince themselves that enough was enough. Wrong move.

Before that happens our people will be hopping, skipping and jumping towards their own demise while a country like Jamaica awaits the leftover from the stocks of the richer countries. Until that time, the people and government policy will continue to clash.

Fines will be imposed on us and even people who fell in love with Andrew Holness throughout 2020 will begin to frown on him throughout 2021. He is the only target, the perfect one. Oh, no, not us.