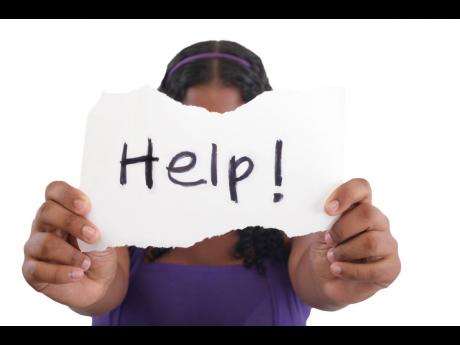 Cherry always had a smile on her face but that day it was absent. As I stopped by her roadside stall to greet her I noticed that her head was down and she was deliberately avoiding my eyes. “Hey girl,” I said while urging her to look up. “Why are you looking so sad.” I saw it then. The blackened eye and a swelling on one cheekbone. “Is what happen now?” I asked.

She explained to me that her man had gone out looking work the day before. Luck was not on his side and he came home in a foul mood. “Sometime him can’t tek pressure, Mark, so him beat mi up. In a way me understand him, in a way.”

A few weeks ago I saw her and she looked well. As we greeted each other she smiled and looked to be in a state of contentment. Maybe there was a better understanding, or she had struck out on her own or in a different direction.

Not so with Greta, a woman quick to violence, shouting and harsh words. “As much as mi love yu, mi know sey yu would neva deal wid a woman like me. Yu couldn’t deal wid di war.”

About a month ago I saw her with a heavy swelling around one eye. “Yu fi si him,” she assured me. She was right. I saw him a few days later and he, too, was similarly impaired.

Many women with swollen eyes endure it while some wonder if it’s not a cultural requirement for them to grin and bear it. At the other end of that fearsome spectrum is the violation that a woman who is raped must live with and for a duration not of her choosing. That is a painful reality that statistics will never fully capture. The fact that in many instances it is by someone she knew makes it harder for her to take that trip to the police station.

PROBLEMS SOLVED AT THE STATION

One of the unsung merits of the effectiveness of small police stations in semi-rural and the deeper, farming communities is their ability to mediate domestic disputes after which the protagonists are sent home. Either to dwell in peace or prepare for the next box dung, kick up.

I have personally witnessed these sessions and I find it amazing that many of these police personnel, especially the women, practise a community type of psychology that makes them ideal for softening domestic disputes. Much of what they do in the front section of the station house never makes it to the big book.

In the urban, inner-city communities, much of the domestic disputes tend to involve items like knives, sawed-down screwdrivers, machetes. It’s a whole different ball game there of a constant high level of tension.

The fact is, in many of these stations, especially at the back where the cells are, the policing is geared to ‘auto correct’ from most of what was taught at the academy.

The living conditions in the inner-city communities, where many residents live in cramped dwellings, as many as six people in a room where only two can fit, can hardly contribute to domestic bliss. A policewoman in that situation trying to solve a domestic dispute in such surroundings may soon find herself doing as much shouting as the seemingly crazed man and woman she is dealing with.

THEY NO LONGER WORK FOR US

The virtues which were once elevated in the 1960s because they worked for the society at that time are no longer considered worthwhile in 2020, except in a few quaint circumstances. Like that which exists among two elderly citizens while they are engaged on a trip down memory lane. The small but useful virtues of good manners did not necessarily mean that the person practising them was weak, malleable and scared of authority. It simply meant that the person understood that there had to be balance in navigating life.

Many people have been unduly ruffling their own feathers in urging the Government and the security ministry to present a crime plan. Present to who, or which set of people?

If it is to the nation, how many pages must it be, and even if it is five pages and it is read by many people, what would they be expected to do after reading it?

By now it should have dawned on us that the prime minister, the security minister and the commissioner all know that the socially accepted virtues or broad understanding of, say, 60 years ago are in a state of perpetual irrelevance for these times.

On the basis that the typical Jamaican (if ever there was one) of today is still unknown, still unfurling, how do you target the likely behaviour of the worst of us?

The easiest path to make a plan to significantly tamp down violent behaviour in this society is simply to lay out full and effective governance. No more of the shiny impressive publications with stuffy words. Just try and make the buses run for the benefit of those who need them the most.

Just give us a guarantee that when the poorest and most powerless call the police in distress there will be someone at the other end to say hello. Just utilise the OUR to provide effective assistance to the people when big tech companies fall down on service delivery. Ensure that our children and elderly people in state care are not abused for the benefits of some of the sick heads preying off our most unfortunate.

Keep on fixing the roads, make more water run in the pipes, give rural farmers more reason to stay in the game one more year. Place our best teachers on a pedestal. Deal effectively with guiding the nation towards a post-COVID-19 reality, however fearful we may be at this time.