Mark Wignall | The dance of the holy and the hypocrite 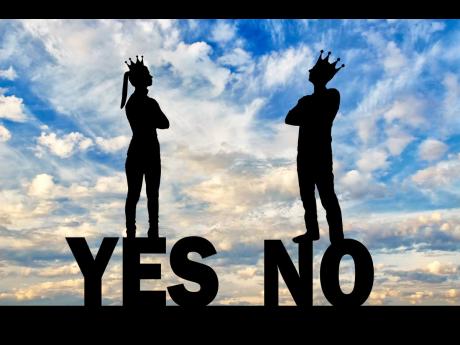 Less than a week ago, I saw a picture of Jamaica Labour Party (JLP) Member of Parliament for Westmoreland Central George Wright standing outside the door of a church. So on the assumption that Wright has had more than a nodding acquaintance with the Bible, he will know that the quote above is from the book of Luke - the second verse of the twelfth chapter.

The MP seems to be in love with punishment. Why do I say that? Weeks ago, a video surfaced which appeared to show a man pummelling a woman with his hand and a chair. I watched the clip and I could not identify anyone with even a 10 per cent certainty.

With all of that, the allegations were strongly in favour of Wright being the aggressor. Were I walking within an inch of his shoes, I would have instantly and forcefully impressed on the general public that I was definitely not the man seen in the video.

It was that very simple matter that George Wright could not do that told us, loud and clear, that he was playing a dangerous game of constricting the truth. In other words, he was the aggressor in an open-to-the-public domestic abuse situation.

Having heaped upon the prime minister, the JLP administration, a pile of embarrassment, Wright gets to walk away with a leave of absence. All driven by required parliamentary procedure. Has it not yet dawned on this delusional man that he is politically finished? Who are those few power players that every political has that have approached Wright and convinced him of that great and all-compelling need to rush to the exit. When the right time comes, and soon.

I went out, desperately hoping that more Jamaicans were in favour of a politician like Wright being booted from the JLP than those who would disagree with that view.

“Mi naw back him, but mi nah fight him dung. All a dem big man dem a beat dem woman, and a di same a small man.”

“So, if nuff man lick dem woman, dat mek it right?” I foolishly put to him.

“Not dat a saying. Only dat none a wi can’t judge nobody.”

From the paved section of the rural roadway to Shay Shay’s house there is a narrow, winding hillside track. In the evenings, it becomes cool. The rum drinkers stay out late while the women remain at home, more out of cultural habit than choice. She was living there with her mother and a few sisters.

Shady Shay was then 14 when the gunmen invaded the home. She was raped, along with an older sister. So was her oldest sister who was in her bedroom. Four years later when her mother began to show signs of mental disturbance, it was determined that the mother had also been raped but had been desperately trying to hide that fact from her.

It was in the year 2000 when she told me what happened. No one reported it to the police. Why not, I wondered. She said it was the belief that someone in their own small rural community ‘badmind them’ and set up some gunmen to invade and sexually assault them.

Shay Shay told me that she was ‘sexually frozen’ and only wanted to finish her cosmetic course and earn some money. Plus, her mother was in and out of Bellevue.

It continues to be an existential embarrassment to me when I am faced with the casual indifference our men have towards rape and other violence towards our women.

Violence that includes rape of our women has never shown a particular addiction to any one class. But as I have stated before, in the wealthier class of people, once a problem airs its ugliest side, it puts pressure on the protagonists to pretend nothing happened.

The social hypocrisy wins out in the end while in the poorer communities, the social honesty often leads to bloody murder.

ARE ALL POLITICIANS DIRTY?

If George Wright has done more than some good for Jamaica and our politics, it is in bringing focus to bear on the similarities between the worst of the governed and the supposed best of those in charge of the governors.

But let us be honest now. Even if we could divest ourselves of our political colours, could we in all earnestness declare that it would be our wish that our children would grow up to be just like Wright? No! And if we could not do that, in which politician’s skin would we want our sons and daughters to be wrapped as they reach adulthood? Probably not a single one, and the question is, why is that so?

It is widely believed that both political parties are evenly yoked if I may borrow and tweaks among religionists.

It is quite obvious that the JLP cannot at times act with any process-breaking haste in leading Wright towards the back door. Central Westmoreland has immense political importance for the JLP. One slip, and it will easily slide back into the People’s National Party column.

n Mark Wignall is a political and public-affairs analyst. Email feedback to columns@gleanerjm.com and mawigsr@gmail.com.