Mark Wignall | Is a rebirth of the JCF likely? 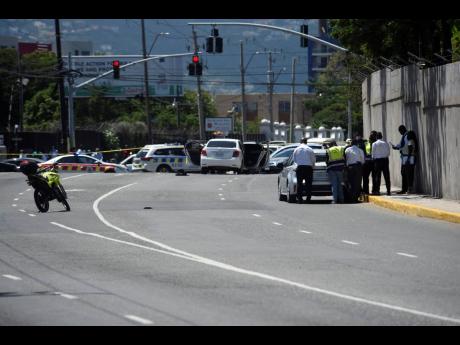 Nicholas Nunes
Police at the scene of the shootout at Trafalgar-Hope-Waterloo intersection where alleged killers of businessman Robert Fletcher were confronted, resulting in a fierce gun battle in traffic on Monday, May 10.

Wherever you were last Monday, I’ll take a solid bet that at some stage of that day, you were glued to news that the police had intercepted gunmen fleeing a scene of crime and gunned them down. You also would have been aware that it required a shoot-out in broad daylight and in heavy traffic. Miraculously, there were no civilian casualties, and the police personnel came out unscathed.

Our past informs us that the gunmen are quite aware of the level of fear they impose on our people. It is normal that if a carload of, say, hitmen or extortionists are trying to gain a safe exit, they know that most police units would prefer not to involve themselves especially with INDECOM on their thoughts.

Last Monday, the old criminal playbook ran out of workable options. Standing firm in the face of the murdering bunch, one little part of the criminal underworld was forced into an option it had never faced before: the State can push back effectively.

In the rush-hour traffic, at a busy intersection in St Andrew, the killers were confronted by a crack, quick response team that had been in training for just such an instance.

The killers were banking on melting into the traffic and eventually disappearing into one of the dense inner-city pockets down the road. They were convinced that the way was clear for them, easily and totally. They were wrong.

In heavy traffic, the challenge was met, and the gunmen were eventually cut down. That many gunshots were fired and there were no civilian casualties speaks to the new professionalism that was later explained by Commissioner Antony Anderson and a handful of security experts.

Or maybe it was just one great miracle. For now, let us hope that it was the former.

Two weekends ago, I was in touch with a little more than a handful of men and women at street level. I wanted to gauge how they saw the shoot-out and the police involvement in it.

I came across one man who was criticising the police for challenging the men in so heavily public a place. Others began to shout him down. “Nonsense him a talk. So whey di police fi do? Wait until di gunman dem escape?”

A school coach suggested that it was the most opportune time to take them on. “Once they turn down towards Half Way Tree and link on to Maxfield Avenue, they would melt away from the police.”

Most people I spoke with supported the police and were congratulatory of this bold, new approach.

When the commissioner spoke on radio, I found myself a little less sceptical than before. My stance has always been to listen to the words of public officials and politicians, tend towards trusting them but not be surprised if the words turn out to be pure wind.

The commissioner began to sound believable, and his understanding of his job came shining through – his big responsibilities at the national level and the need to reimagine a newer, better-trained and prepared police force.

The dots may not have been finely and expertly connected, but I got the sense that a newly exposed synergy between the top cop and his ‘squaddies’ at street level would, in time, put the quilt together with no mismatched patterns.

There have been tragedies before when poorly trained, reckless, and trigger happy cops have taken on gunmen in vehicles. Innocent passengers have been killed, and in one instance, the fingers of a passenger in a bus were shattered by the shots fired by the police. Dare we buy into the words of Commissioner Anderson and engage in a newer relationship with him as he tackles crime? Having been told time and time again that tackling criminality in this country is everyone’s business, our ability and actual move to trust the words of the commissioner are of paramount importance.

But we know that the toughest part of any job is that part that will show up tomorrow when the feverish part of the minds of paid assassins stir again and probably will not hesitate to push their murderous arrogance into the face of the public and the JCF. That will be a much tougher test. In the meantime, the investigative arm of the JCF needs to take a deep dive into the murder of businessman Robert Fletcher. What was it that brought it about? The very first option in our minds may well be the obvious one.

For a time in the late part of the 1990s to the beginning of 2000, one got the sense that sections of the political directorate wanted to announce their independence from many of the usual thugs available to them. Especially those who were beginning to display disrespectful behaviour. The judiciary understood the mood and men who controlled huge drug empires here at home were deported.

These men controlled small armies of young gunmen. Some were given guns and some came armed. But many of these young men were funded and protected by the big druggist, who was now getting deported. The first response was the birth of the lottery scheme. When pressure was brought to bear in that there was a bigger push on extortion. But all that pile of fear takes it to the next level: murder for hire. But it’s not exactly new.

At a time in the 1970s on a morning just ambling towards 9:00 a.m., political pollster Carl Stone was about to drive out of his driveway. He saw a man coming towards the car. Slowly. Carl pulled his gun but kept it concealed. The man opened up. He told the university professor that he had been given a gun to kill him but some other people in the gun man’s community had said that he Carl was “a good man”.