Clifton Yap | In the quest for safe and liveable streets 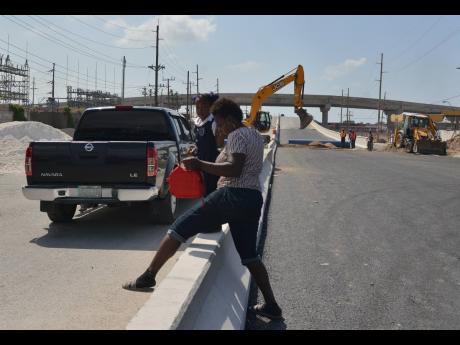 File
In this file photo, Sophia Bogle and her child negotiate a median on Spanish Town Road, in the vicinity of Majesty Gardens. Experts say that building these high medians, Jersey barriers, is a mistake and contrary to best practices in the world.

The United Nations Global Road Safety Week, which started on May 17, has as its theme #Streets for Life, and in their open letter, the UN states that “Low speed, liveable streets are essential and urgent”. Their message is that “Streets for Life” refers to every aspect of our lives – as “we work, we live, we play and travel on our streets every day” – and their priority for this year is to create “liveable communities”.

As a part of the Global Road Safety Week, on Thursday, May 20, the National Road Safety Council of Jamaica (NRSC) presented a UN Webinar for which the focus was on “providing streets that are safe in every sense of the word”.

The speakers, in their presentations, emphasised that road safety is not only about reducing speeds to 30km per hour around schools and urban areas, but in prioritising streets for pedestrian usage, and bicycles, with particular considerations for children, the elderly, and the disabled.

Of particular relevance for Jamaica, the presenters stated that “urban highways are killer machines” and that they should not be built in our cities as they are incompatible with pedestrian usage and safety. They implored the country’s policymakers and road engineers to completely rethink the way that they have been approaching road infrastructure.

They also emphasised the worldwide initiative of reducing car dependency and car usage to reduce carbon emissions as one of the highest priorities.

What the UN is promoting at an international level this week is what communities in Kingston, like the Golden Triangle Neighbourhood Association (GTNA), which represents Seymour Lands, have been striving to achieve for years : a liveable community with safe streets. Unfortunately, all the work and efforts so far have been futile,as there has been very little or no meaningful cooperation from the NWA or the Agency entrusted with planning and environment in Jamaica: NEPA.

Towards the goal of having “Safe and Liveable Streets”, The GTNA has written numerous letters of appeal to the NWA to have further dialogue to halt their plans to extend their four-lane “highway” from Barbican Square through Lady Musgrave Road (LMR), but these have gone unanswered and ignored.

GTNA has tried to explain that Seymour Lands is primarily a residential area, with Lady Musgrave Road as a NEPA-designated mixed-use street running diagonally through it. The main benefit and purpose for “mixed use” zoning as a tool of city planning is to minimise car dependency by creating “walkable neighbourhoods”, where residents have the opportunity to be able to walk to their doctor’s office, a restaurant or coffee shop, or a grocery store, for example.

This will become even more urgent, with the plethora of high-rise high-density apartments that have been, and are being, built and the hundreds of car uses being generated from what were previously single-family homes.

However, zoning alone for mixed use will not by itself achieve the objectives of pedestrian usage. In other enlightened cities around the world, pedestrianisation is encouraged by making it safer to walk, and this is done by reducing, not increasing, road widths for cars in order to slow speeds.

It is encouraged by providing a highly aesthetic public realm, including spacious sidewalks, with shade trees for comfort in hot climates, and the provision of bicycle lanes and high-quality public transportation.

Sidewalks are an extension of parks and pedestrian plazas in a city and are important as spaces where people not only do business or go for services, but are also a place where social interaction of citizens takes place naturally - this is what helps to create the vibrancy and joyfulness which people experience when they travel abroad to great cities like Copenhagen in Denmark and Barcelona in Spain

These are part of the larger vision that the GTNA has for the development of Seymour Lands. A vision evolved from over two years of community workshops and consultations, guided by experienced urban planners from Medellín in Colombia (a city that is a leading example in the world for urban planning).

This vision and desire of the citizens of Seymour Lands will be irretrievably destroyed if, as announced by the PM recently, the Government/NWA proceeds with the destructive road-widening formula of “urban highways”, which they have already implemented in Barbican Square and want to extend through East Kings House Road and Lady Musgrave Road.

It is of note that PM Andrew Holness is also the chairman of the National Road Safety Council of Jamaica and gave the opening remarks to the UN Webinar Thursday morning, in which he stated his commitment to improving road safety in Jamaica.

If the PM really listened to the presentations made, he would have realised that the countless billions of dollars of public resources that his administration has spent to build urban highways, including the introduction of the concrete, Jersey barriers throughout the city (Hagley Park Road, Constant Spring Road, and Barbican Road, etc), was a colossal mistake and totally contrary to the direction of best practices in the world.

It is hoped that as was called for by the UN presenters, political leaders will move from well-sounding political statements to taking the right actions going forward.

- Clifton Yap is an architect and member of Golden Triangle Neighbourhood Association. Send feedback to goldentriangleneighbourhood@gmail.com.